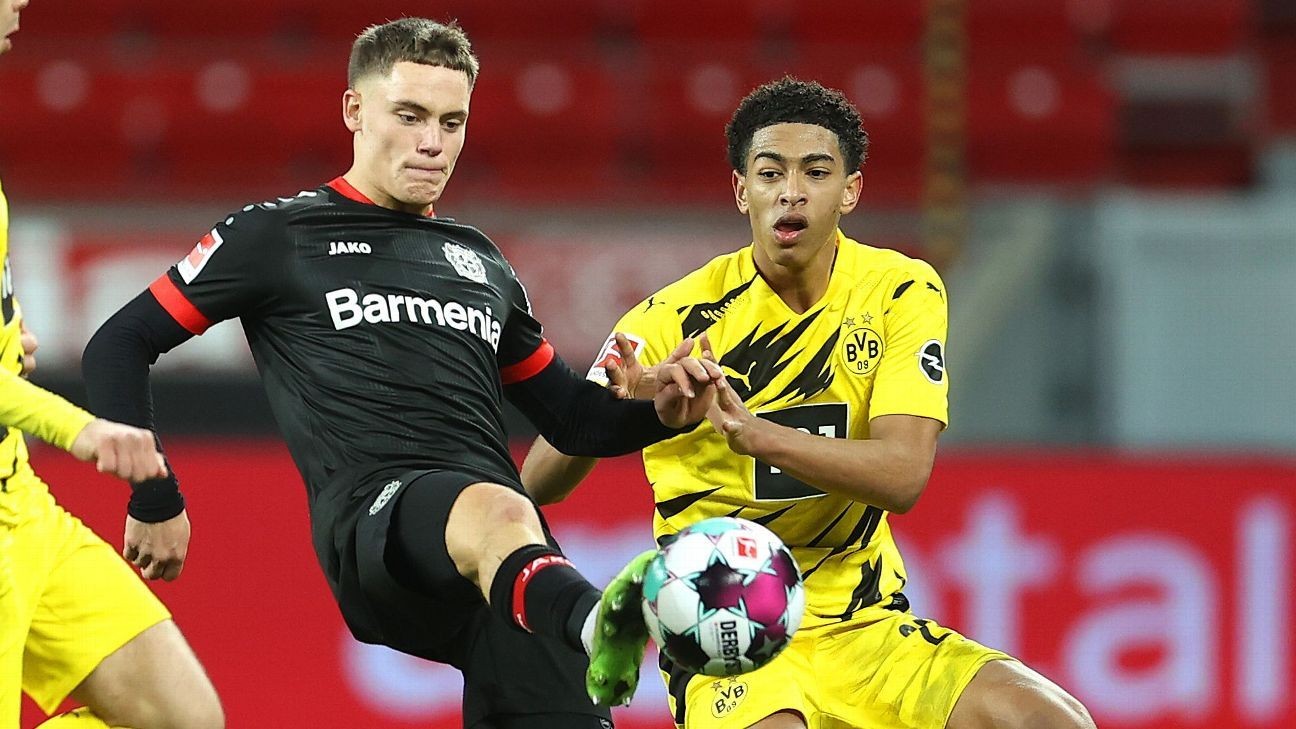 Real Madrid's interest in Paris Saint-Germain's Kylian Mbappe and Borussia Dortmund's Erling Haaland has been well documented, but Marca have listed five other players who are on Los Blancos' radar.

With the club looking for those who can take them into the future, the first name on that list is Haaland's Dortmund teammate Jude Bellingham.

The 18-year-old is already a key man for his club and has broken into Gareth Southgate's England setup, which means Real Madrid are among the many big-name clubs looking at him.

Another Bundesliga talent under consideration is Bayer Leverkusen's Florian Wirtz, the 18-year-old who already has eight goals and 12 assists to his name in all competitions this season.

Next is Ajax Amsterdam's Ryan Gravenberch, whose talent has long been evident for many, but Madrid have had their interest piqued by his growing influence in the Eredivisie.

Leicester City centre-back Wesley Fofana is also on the list, even though he has not been able to play yet this season due to injury.

The final name mentioned in Marca's report is Endrick, the 15-year-old who has already played numerous times for Palmeiras' first-team despite being too young to sign a professional deal. This comes despite the fact the he would need to wait until he is 18 to move to Europe.

- Juventus midfielder Aaron Ramsey could make a surprise move to relegation battlers Burnley, says the Sun. The Italian giants are reportedly "desperate" to get the Wales international off their books and have approached Sean Dyche's side after Crystal Palace declined to make an offer.

- West Ham United want to sign Dominic Calvert-Lewin as they search for a striker, but Everton are demanding £60 million for the England international, according to the Sun. David Moyes is said to be willing to put in a big offer for a new frontman, but the current valuation is deemed too high for the Hammers. In need of funds after years of over-spending, the Toffees are also considering offloading Jordan Pickford.

- Tottenham Hotspur are planning to make an offer to Club Brugge for 20-year-old forward Charles De Ketelaere during the summer transfer window, as has been reported by Ekrem Konur. The Belgium international has already scored 13 goals and assisted a further eight in all competitions this season, while Spurs have reportedly been moving to sign Wolves flyer Adama Traore this month.

- Aston Villa are in talks with Juventus to sign Rodrigo Bentancur, as has been reported by Sky Sports, with the Uruguayan midfielder being valued at around £16m. Negotiations are currently ongoing, as Steven Gerrard feels that the 24-year-old can strengthen Villa's midfield, specifically providing good competition for Douglas Luiz.

- Valencia have contacted Tottenham about the possibility of signing Bryan Gil on loan, reports AS. The Spaniard has not been a prominent figure since joining Spurs in the summer, so would be happy to go as long as the North London club gives the green light. It is expected that a deal will be completed late in the window if it is to come off.

- Having already signed Chris Wood from Burnley, Newcastle United are now trying to bring in James Tarkowski, according to the Sun. However, the Clarets are already frustrated about seeing one key player join a relegation rival, so it is expected that a big offer would be required to see Tarkowski leave Turf Moor.