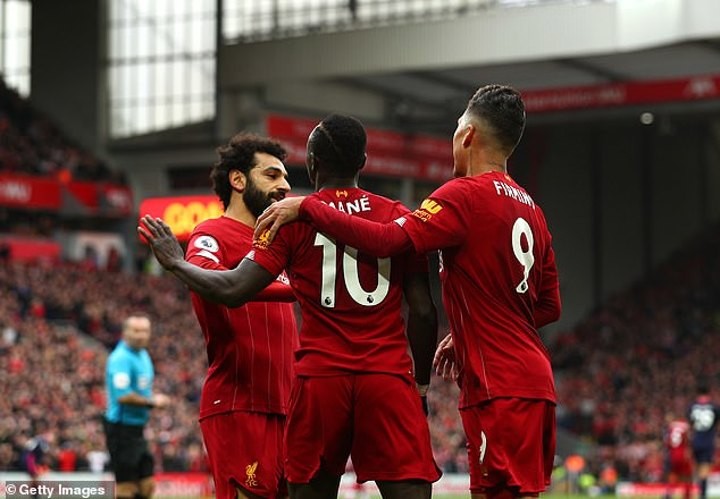 Two wins away from the Premier League title, having won all but two league games this season, Liverpool have had a season for the ages. But there's always room for improvement, right?

As we await the Premier League's expected return next month, Jurgen Klopp's side have been linked with a number of exciting attacking talents, who could add even more firepower to the lethal front triumvirate of Mohamed Salah, Sadio Mane and Roberto Firmino.

But out of Wolves' Adama Traore, RB Leipzig's Timo Werner and Bayer Leverkusen's Kai Havertz, who is best suited to Liverpool's style of play and most likely to make an immediate impact?

The Reds were this weekend linked with a £60m move for Wolves winger Adama Traore, who has had something of a breakthrough season under Nuno Espirito Santo.

One of the most explosive players in the Premier League, Traore's powerful direct dribbling and frightening speed have been a constant threat to teams, in a Wolves side which continues to surpass expectations.

Bouncing off defenders and leaving them for dead, the raw pace and power of the 24-year-old has never been in doubt, ever since he stepped foot in England with Aston Villa in 2016.

But what has been most notable watching Traore this year, in contrast to seasons gone by, is his end product.

He boasts six goals - including a match-winning brace at Manchester City in October - and 10 assists in all competitions.

Traore joined Wolves in August 2018 for less than £20m from Middlesbrough but his displays over the last 12 months could see him fetch three times that figure if he leaves Molineux in the summer.

If he joined Liverpool, he would add even more pace to an already lightning fast attack, with Salah and Mane on the wings.

With no real experience of playing in a number nine role on his own, Traore is at his most effective from out wide - so would he break into Liverpool's strongest XI?

Probably not, though he could play if Salah played up front and Firmino was injured/rested.

In terms of squad depth though, Traore would be an upgrade on current back-ups Divock Origi, Xherdan Shaqiri and Adam Lallana (who is due to leave this summer anyway, with his contract expiring).

Klopp acquired Mane after he impressed against his side in 2016 for Southampton. After Traore's domination of Andy Robertson in Liverpool's narrow 2-1 victory over Wolves in January, could the German plunge for Traore in a similar manner?

Red Bull Leipzig's star striker seems to have been linked with a move to Liverpool for an eternity now.

Quick, positionally-aware and deadly when presented with an opportunity, Timo Werner was compared with former Liverpool striker Fernando Torres by Owen Hargreaves over the weekend - quite the compliment, given Torres' explosive arrival at Anfield in 2007.

The comparison is evident. Currently thriving in an all-conquering Leipzig side, who are through to the quarter-finals of the Champions League and competing domestically, Werner has scored 27 goals in all competitions this season.

In fact, such is his potency, only PSG's Kylian Mbappe has scored more as a player aged under 25 in Europe's top-five leagues - and that's in a decidedly weaker division in Ligue 1, compared to the Bundesliga.

'Werner is the Fernando Torres type, where he is super explosive, he will run away from anyone,' said former Bayern Munich and England midfielder Hargreaves.

'He's got to make sure that he gets the right fit. We saw this with Torres when he left Liverpool, the way they played, Stevie G [Gerrard] playing those balls through the middle — a match made in heaven.

From Werner's standpoint, he has also been glowing of Liverpool and Klopp in the past, saying recently: 'Jurgen Klopp is the best coach in the world. There is a lot to suggest that my style of play would suit there.'

However, Werner would not come cheap. A ball-park in a similar region to Traore - around £60m - could see Leipzig part with their star man, though recent speculation has inferred that all parties could hold off until the summer of 2021 for a move.

If the 24-year-old were to join Liverpool, he would not accept a role as a bit-part player.

He would most obviously replace Roberto Firmino as the number nine in the team, though that in itself would be harsh on the Brazilian, who has progressed into a world-class operator throughout his five years at the club.

But there is no doubting Werner, a Germany international with 11 goals in 29 caps, would be a superb signing for Liverpool, and there seems to be a willingness from both club and player to do a deal. Just when, and for how much, remains to be seen.

No doubt about it: Kai Havertz is, at the moment, one of Europe's most exciting and in-demand youngsters.

The Bayer Leverkusen star continued his stunning form post-lockdown on Saturday, scoring his second brace in as many games as his side beat Borussia Monchengladbach 3-1.

The 20-year-old, who made his international debut for Germany at the age of 19, has been linked with a move to the Premier League, with Liverpool, Manchester United and Chelsea reportedly leading the chase.

Former Leverkusen and Premier League striker Dimitar Berbatov praised Havertz in the week, though warned against him pushing for a move immediately despite his obvious qualities.

'All eyes are on the Bundesliga at the moment and when you score goals and play good football it is no surprise that teams like Liverpool want you,' said the Bulgarian.

'I would like to see Havertz in the Premier League at some point, but not right now. I think it is a bit too early for him.

'I also think he will need a bit more muscle to play in the Premier League, we all know how defenders can squash you and smash you into pieces and you need to be ready for that if you are going to hit the ground running in such a demanding league.'

The man himself seems to be aware of the speculation too, though maturely is simply focusing on his performances for Leverkusen. For now.

'I do not like to say, of course, that there is a lot of speculation,' Havertz said, after another excellent display on Saturday.

'I'm concentrating on this season and will see what happens afterwards. I am very grateful to Leverkusen and I don't want to mess it up in any way.'

A playmaker, a goalscorer and something of a livewire already at such a tender age, Liverpool would arguably face the fiercest competition in signing Havertz, should they move for the youngster.

In addition, given his inexperience, it is unlikely he'd come in to usurp any of the current front three, particularly entering a new league and country.

But under the guidance of compatriot Klopp, Havertz certainly has the attributes to play in the Premier League. And so long as his performances continue to impress, the speculation will only go in one direction too.

Overall, the judgement depends on what exactly Jurgen Klopp wants in his next attacking investment.

With Traore, you are guaranteed immediate impact on the wing, whether it be from the start or off the bench. His experience in the Premier League is a box he can tick, which Werner and Havertz can't, too.

All three players would undoubtedly improve Liverpool's strength in depth, and are upgrades on players currently occupying the substitutes' bench week-in, week-out at Anfield.

But in terms of end product, and the player most likely to grasp a place in the starting XI, Werner is at the front of the queue. His goalscoring prowess, intelligent runs and speed off the mark means he'd fit most seamlessly into this current Liverpool juggernaut.

What path, if any, Klopp decides to take this summer - amid the continued coronavirus crisis - will be fascinating as it unfolds.