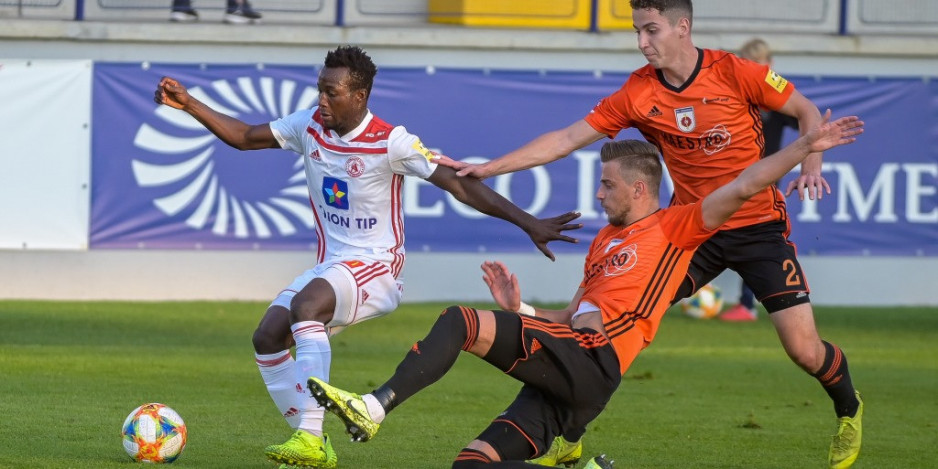 Osman Bukari is wanted by five clubs in Europe

Slovakia top-flight side Trencin have revealed that their Ghana youth international Osman Bukari would be sold for not less than €3 million and slammed 'fake news' of another price value for the in-demand winger, Ghanasoccernet.com can exclusively reveal.

Six months ago, Trencin rejected €1.5m offer from Polish giants Legia Warsaw for the speedy winger wanted by several clubs in Europe ans would now be sold for between €2.5m to €3m.

The 21-year-old's value has rocketed since then thanks to impressive performances for Trencin and with growing intense interest he would be sold for a much higher price.

Trencin insiders rubbished a false report by a Ghanaian media outfit claiming that the player targteted by Turkish side Galatasaray for a lower price.

The Slovaks say the player would not be sold for any lower price because of his immense talent and his proven performances in the league after two seasons.

Experts in the football transfer business, say Bukari would command a bigger price thanks to his international experience with Ghana U23 national team as well as him having excelled in a league in Europe.

Portuguese giants Sporting Lisbon are among the five teams in Europe who have targeted the Ghana U23 star to sign him when the transfer window opens for next season.

Another top club that has sent its scouts to monitor the Ghana U23 star is ambitious Turkish giants Galatasaray who are ready to splash the cash the grab the player.

The Istanbul-based club who are trailing behind leaders Trabzonspor and Basaksehir are already chasing after players to help them annex the Super Lig title next term.

But they will also face tough competition for Bukari’s signature who has also attracted interest for determined Spanish side Celta Vigo.

Czech giants Slavia Prague are still maintaining their interest in the highly-rated youngster as they were the first club seeking to talk to Trencin officials about Bukari.

French side Nimes Olympique completes the list of teams keen on the 21-year-old, who is turning heads in Slovakia with blistering performances.

The Ghana U23 international has already been declared the best player in the Slovak top-flight league this season after winning eight Man-of-the-Match awards in the league.

The winger, who can also play as a ghost striker has appeared in 21 matches this season in Super Liga, playing a total of 1844 minutes.

Bukari scores an average of 0.34 goals for every 90 minutes that he's on the pitch.

This attacking performance currently places him among the top of the 229 players in Super Liga who've played at least 3 matches.

He has scored a total of 7 goals so far in the season in the league, which places him at first in the Trencin squad's Top Scorers list with six assists.

He joined the Slovak top-flight side in 2018 from Division One side Accra Lions.