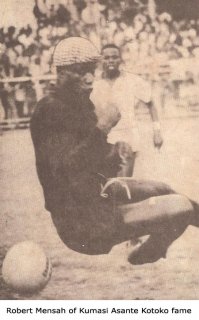 The Ghanaian goalkeeper always wore a black jersey and a funky, oversized cap, which prompted fist-fights on occasions due to opponents believing it was cursing them.

He would carry a newspaper on to the pitch and, outrageously, read it during matches. He would urge adversaries to shoot while looking the other way.

He would deride those brave enough to take penalties against him verbally and with mocking dance sketches (he had an excellent record at not conceding spot-kicks).

Mensah was equally offbeat off the field.

He loved acting the clown while his coach was attempting to deliver prep talks, and when he should have been attending training sessions, he was often in bed or drinking in bars.

His singular, dramatic tale was tragically concluded in one.

A day later, 40 years ago to this day, Mensah was pronounced dead.

His funeral was a grandiose, Garrincha-esque procession attended by the masses.

Mensahâ€™s memory has of course lived on, though to the vast majority outside Ghana, he is remembered for his newspaper-reading eccentricity.

What's unbeknown to many is what a formidable footballer the Tema native was.

He excelled for Ghana, whom he helped into the 1968 Africa Cup of Nationsâ€™ final, which they lost 1-0 to Congo DR, and played for Mysterious Dwarves, Sekondi Independence Club, Tema Textiles Printing and, most prominently, Asante Kotoko.

Mensah inspired the Kumasi heavyweights into the final of the African Champions' Cup-a precursor to the CAF Champions League â€“ in 1967, but after back-to-back draws with TP Mazembe, the Ghanaians, for disputed reasons, didnâ€™t partake in an additionally scheduled deciding match and the Congolese were therefore awarded the title.

Mensah and Asante got revenge in January 1971, though, beating the same side in the same fixture to become the kings of the continent.

After the first leg finished 1-1, Mazembe enhanced their favouritism from significant to overwhelming by taking the lead in Lubumbashi.

However, a series of stunning saves from Mensah helped the visitors establish a 2-1 lead, before he employed his patented antics to intimidate Kakoko, who had never missed a penalty, into blazing a last-minute spot-kick high and wide.

Tales of him intimidating penalty takers and flicking through the papers during matches are infinitely etched in footballing folklore.

And though this level of eccentricity often overshadows excellence, it should be remembered that Robert Mensah ended 1971 not just as the victim of a fatal stabbing, but also as the CAF African Footballer of the Year runner-up.