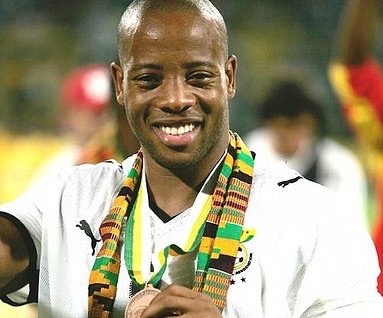 Former clubs of Junior Agogo have been pouring in tributes for the former striker, who passed on early Thursday morning.

The ex-Ghana striker passed away in a hospital in London this morning aged 40.

Agogo was making progress following his gradual recovery from stroke that had debilitated him for some time now.

Former clubs Barnet FC, Bristol City, Nottingham Forrest and Sheffield Wednesday have all been paying tributes to the player.

“Barnet FC are deeply saddened to hear of the passing of former Bees striker Junior Agogo,” Barnet tweeted.  “The thoughts from everyone at the Club are with Junior's family and friends at this sad time. Rest in peace, Junior.”

“RIP Junior Agogo.A Gas legend, scoring 41 goals in 126 appearances.Our thoughts are with his family and friends at this time,” Bristol City posted.

English Football league also posted,”We are saddened to learn of the passing of Junior Agogo. Our thoughts are with his loved ones at this sad time.Rest in peace, Junior.”

Agogo is fondly remembered by Ghanaians for his heroics at the Nations Cup in Ghana 2008. His goal against Nigeria will always be in the memories of Ghanaians.