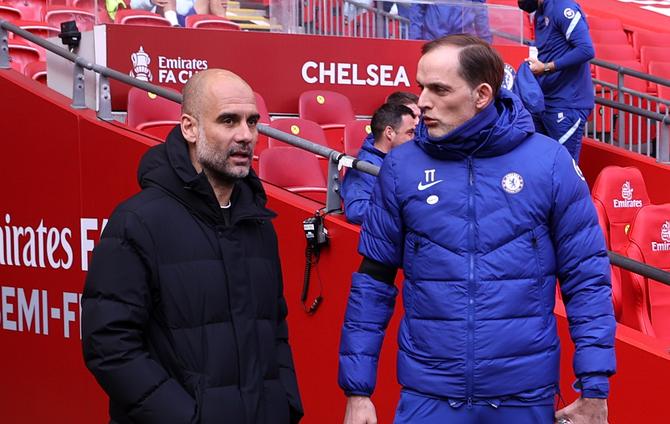 Thomas Tuchel is braced for "the most difficult game" against Pep Guardiola's Manchester City as Chelsea prepare for a Champions League final dress rehearsal.

The two clubs came through their respective semi-finals to secure an all-English showdown in Istanbul later this month, but first they will do battle in the Premier League on Saturday.

Tuchel got the better of Guardiola when the sides met in the last four of the FA Cup last month, with Chelsea running out 1-0 winners as they seek a trophy double this season.

But City have a treble in their sights as the EFL Cup winners seek a victory that would wrap up the top-flight title this weekend and Tuchel knows the Blues, fresh from Wednesday's 2-0 triumph over Real Madrid, will be up against it at the Etihad Stadium.

"If you play against Pep you know the most difficult game has arrived because he has coached the best teams in Europe and he leaves his footprint and style of play," said the German, who also took Paris Saint-Germain to last season's Champions League final.

"His teams are always super hungry to win and he transforms them into a winning machine.

"It was like this at Barcelona, Bayern Munich and Man City. They are the benchmark in the Premier League but it is our job to close the gap for 90 minutes.

"Once you arrive against Pep you know the level is high and you have to be at your best coaching level to give your team full confidence and play at the best level.

"They are used to winning and are a very regular team at the highest level."

Chelsea have a poor recent record at City, losing on their last three trips by an aggregate score of 9-1, while the hosts have not lost at home to London opposition since 2018 against Crystal Palace.

Although none of the last 11 meetings have ended in a draw, both sides have shown an aptitude for solid defending this season, City keeping 18 clean sheets in 34 league games, while Chelsea boast 11 in 15 top-flight fixtures under Tuchel.

Asked if this domestic meeting had taken on added significance in light of the continental clash that awaits, Tuchel added: "I'm not so sure. The possibility is that they can become champions so their ambitions and determination will not be lower.

"They have the upper hand because they had one more day to recover and don't have to travel, we saw how big an impact that can have in the FA Cup.

"We have to deal with it and I think that the final in Istanbul will be pretty unique no matter what the score is tomorrow, no matter if we win or they win or if we draw.

"I try to prepare the game in a normal way and the challenge right now is to get the tiredness out of our legs and our brains. The target is to be in good shape tomorrow and then we'll see."

One player Chelsea will be wary of is Kevin De Bruyne, who has scored four goals in against them in the Premier League – the most of any player against the Blues who had previously played for them in the competition.