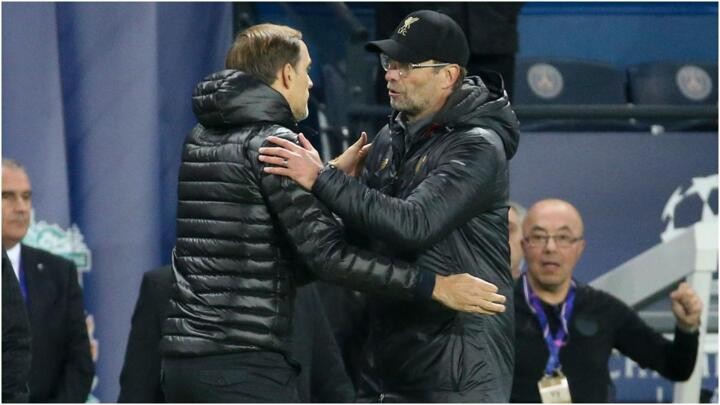 Chelsea boss Thomas Tuchel says he is not as close to Jurgen Klopp as some people think but holds him in high regard.

Thomas Tuchel says the challenge of pitting his wits against Jurgen Klopp's genius has been getting him out of bed early.

Tuchel's Chelsea travel to Anfield to face Klopp's reigning Premier League champions Liverpool on Thursday, with both teams embroiled in the battle to secure a top-four finish.

It will be the first time the former Mainz and Borussia Dortmund bosses have crossed paths in English football and Tuchel recognises something of the fervour Diego Simeone imbues in his Atlético Madrid sides within Klopp's Reds.

"Klopp is a genius"

"It brings me out of bed early because it is a challenge for me to play against him," he told a news conference.

"He is a genius but, in the end, we will not meet up for a game of tennis, we play with our teams and we have to be prepared.

"Jurgen has proved to be outstanding, he transforms any club into a unit and at all the three clubs he has worked at he has been a big part of them, with the heart of the fans. He is a huge success.

"He has done that now abroad in the most difficult league and transformed Liverpool into a winning machine and a team that are super hard to play against. It is a union between his players and him and this is what you face when you play against him.

"It is similar to Diego Simeone and the group of players at Atlético, they are really together and like I said, it is a big challenge, but we are up for the challenge."

Last week, Chelsea came through the challenge posed by Atlético to take a 1-0 lead at the midway point of their Champions League last-16 tie.

It was the high point of an encouraging start to Tuchel's tenure, whose Blues are fifth in the Premier League – a point and a place above Liverpool.

The gap between the sides is probably closer than Tuchel's nonetheless warm personal relationship with Klopp.

Similar paths for Klopp and Tuchel

"Of course, we know each other but maybe not like everyone expects because I came into Mainz's academy at exactly the year that he left, so we never met there," he explained.

"I was his successor in Dortmund, so we did naturally not meet. Of course, we meet when there's a farewell game for a player that we both coached at Mainz then we sit together and talk.

"It is a lot of fun to talk to him and it is interesting when there's UEFA meetings or coach meetings. We use the time to have lunch or dinner together around those meetings.

"It is always super funny and interesting to talk to him, but it is not as close as it might seem maybe."

Speaking at his own briefing on Merseyside, Klopp offered a similar version of how often he and Tuchel cross paths and dismissed the notion of a rivalry between two of Germany's leading tacticians.

“I don't know how big it is [the rivalry] in Germany, I didn’t read anything yet. Who is the top manager in the Premier League? That is a competition for others to be interested in," he said.

"I am interested in winning a game and that is all, Thomas is the same.

"He worked for three years in Paris, so we didn't play each other a lot in the last five and a half years.

"I think he is an outstanding coach or manager, whatever you want to call it, and it will be tricky to play his team, like it always was."