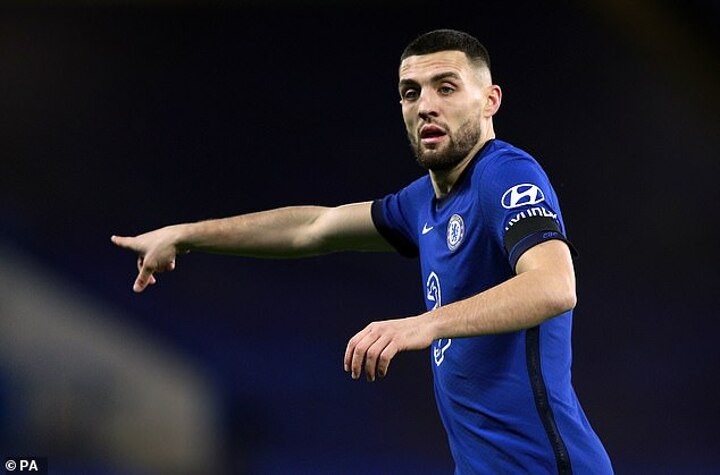 The return of Mateo Kovavic to the Chelsea team is 'huge', says boss Thomas Tuchel, as he hailed the Croatian's power and influence ahead of the FA Cup final.

The Blues are hoping to scoop their first silverware of the season on Saturday evening as they face off against Leicester City at Wembley, and Tuchel will be boosted by midfielder Kovacic returning to full fitness.

The Croatian has not played since the 4-1 win over Crystal Palace on April 10 after picking up a hamstring injury - being forced to sit out of crucial games against Porto and Real Madrid in the Champions League, as well as Manchester City in the FA Cup semi-finals.

Tuchel's men rallied in his absence to reach both finals, and he said it was crucial to have Kovacic back available with his side just one win from a trophy - calling him 'a big guy in the dressing room'.

'It's huge because Mateo has everything we need in the midfield,' said Tuchel. 'Expereence, power, he can beat players, he has physical ability and has played big games in the Premier League.

'When we missed N'Golo [Kante] and Mateo, we lacked a lot of quality, energy and experience. Billy [Gilmour] did a huge job in huge games but it's not fair to compare him to these players because they have more experience and are a step ahead in their development.

It's big news that [Kovacic] is back because he's a big guy in the dressing room around important matches.'

Kovacic has started 20 games in the Premier League this season, laying on one assist, and proving to be a favourite of Tuchel. He's played 17 games under the German since he took over from Lampard in January.

Chelsea had been on a good run of form before the final - winning three games in a row - including a 2-0 victory over Real Madrid to book their place in the Champions League final against Man City - but their preparations were dealt a set-back after they lost 1-0 at home to Arsenal on Wednesday.

Tuchel admitted he still had a 'hangover' from that disappointing result and said he was in 'angry mode', but challenged his team to show a reaction as they get ready for a tough challenge against a talented Foxes side.

'I still have a hangover from the last defeat, it's always like this,' he said. 'So I'm still in angry mode. When we arrive at the hotel and tomorrow, I hopefully will transform it in good preparation and push to the edge. We have to show a reaction.

'It's a big match, at Wembley, an FA Cup final, my first final in Wembley. It's huge but I won't get carried away with emotion.'