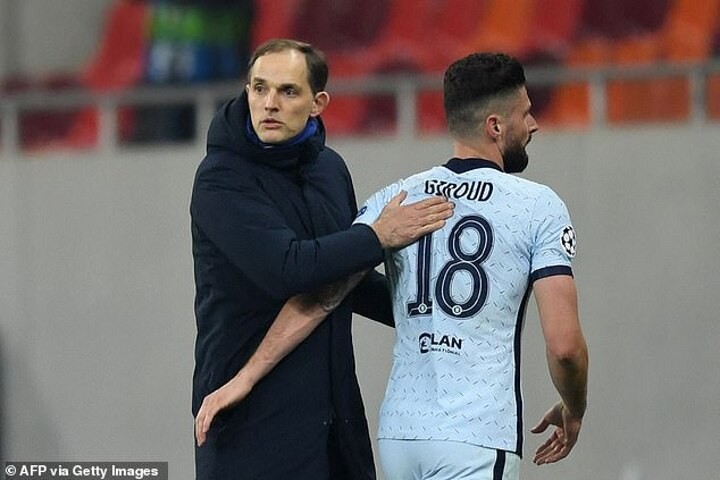 Ahead of Chelsea's Champions League clash with Atletico Madrid last week, Thomas Tuchel sat down to speak with Rio Ferdinand.

Before the BT Sport pundit could get in his first question the German head coach flashed a tongue-in-cheek warning to the former defender.

'If you have a the same impact on my Champions League result like last time, I'll switch to Owen Hargreaves.'

For while there was a considerable last-16 clash ahead, the memory of another was still there, gnawing away at the 47-year-old.

The ghosts of Paris Saint-Germain's shock exit in 2019 at the hands of Manchester United have yet to be put to bed, and how Tuchel would love to leave the past behind.

But in moving to the Premier League and taking charge at Stamford Bridge he has inadvertently sought to face them head on.

After sealing the most important victory of his west London reign midweek thanks to a flawless defensive display against the Spanish league leaders, a statement victory on the domestic front is next on the tick list.

No victory would be sweeter than one over Ole Gunnar Solskjaer's side.

There is no doubting the German knows how to beat United. Indeed, he did it twice with PSG, both times at Old Trafford.

But it was the manner of the loss at the Parc des Princes in March 2019 that set the tone for an ultimately frustrating stay in the French capital. It is an irritation that still lingers.

That evening was meant to be a formality, with PSG holding a 2-0 first-leg lead after a stunning display at Old Trafford.

Goals from Prisnel Kimpembe and Kylian Mbappe were the least the Ligue 1 side deserved from an attacking display that had United reeling, a demonstration of exactly the kind of dominant performance expected of a side tailored from Qatari riches.

Tactically, there was little wrong, with the second leg either. But it was individual errors, and players not being primed for the occasion, that cost the players and their manager.

A slack back-pass from Thilo Kehrer was seized upon inside two minutes, and despite deservedly levelling, a Gianluigi Buffon gaffe gifted Romelu Lukaku his second on the half-hour.

The third, a generous penalty given in stoppage time for a handball against Kimpembe and scored by Marcus Rashford, sealed a United comeback both miraculous and undeserved.

It left question marks over the resilience of PSG, and the message that had been instilled in them before the game - the nerves on display belying the comfortable position they had found themselves in.

If it had been hoped this was a one off, though, the group stages of this year's Champions League dispelled that myth.

Once again Manchester United came to Paris and once again Rashford delivered the telling blow, striking in the final five minutes of normal time to secure a 2-1 victory.

Once again, good fortune, or bad depending on which way you come at, played it's role. Bruno Fernandes was allowed the chance to retake his saved penalty in the first half after Keylor Navas was adjudged to have moved off his line by VAR.

Still, there is no doubting that Tuchel has been an ardent student of United's philosophy, and has a strong grasp on exactly how to play against them.

Speaking before the match at the Parc des Princes last October, he told reporters exactly what was needed to minimise the threat from Solskjaer's side.

'They play with super-fast attackers, and for me they are one of the strongest teams in Europe in the attacking transitions,' he noted.

'It will be necessary to stop them before the counterattacks. We want to take the ball, show our style and impose it, but we need to play with a good structure to evolve with a good counter-pressing and to prevent opposing counter-attacks, especially since they are also efficient on set pieces.

'These are key points on which it will be necessary to defend well.'

Tuchel also singled out Paul Pogba and Bruno Fernandes as the heartbeat of United's attacking intent, insisting the Frenchman is still one of the best midfielders in the world.

The reassuring thing for him will be that he knows full well how to set up a winning side against Solskjaer, PSG's second Champions League clash with United this season being case and point.

A comfortable 3-1 win was secured at Old Trafford, with Neymar grabbing two as the French side were able to showcase their own intuitive counter-attacking.

Slicing through a United side with Neymar and Kylian Mbappe leading the line, however, is a different proposition to what he has at his disposal this weekend.

Chelsea have not exactly been free-scoring since Tuchel's arrival, although they have found the net in every game since a 0-0 stalemate with Wolves in his first match.

Instead, victory over United with his Chelsea charges is likely to be secured by the slightest of margins, as has been the case with his two most eye-catching results to date.

Victories by one goal to nil against both Tottenham and Atletico have demonstrated a newfound defensive resilience in Chelsea's back line. They have conceded just two goals in the German's eight matches so far.

In doing so, the Blues have been dominant in possession. Even away at Spurs and Atleti, they enjoyed the lion's share of the ball.

The same approach on Sunday could leave them open to United's counter-attacking threat, something their manager will be looking to avoid.

Having been restored to the starting line-up at Southampton last weekend, N'Golo Kante's bit part in Bucharest suggests he may be called upon from the start once again at Stamford Bridge on Sunday.

Tuchel has praised the qualities the diminutive Frenchman brings to the Chelsea squad, and his work-rate could be key in thwarting United moving into attacking phases quickly.

If that can be achieved, it will be the speed of Tuchel's Chelsea transformation that will be grabbing the headlines come Monday. That is something he would be more than happy to chat with Rio Ferdinand about.