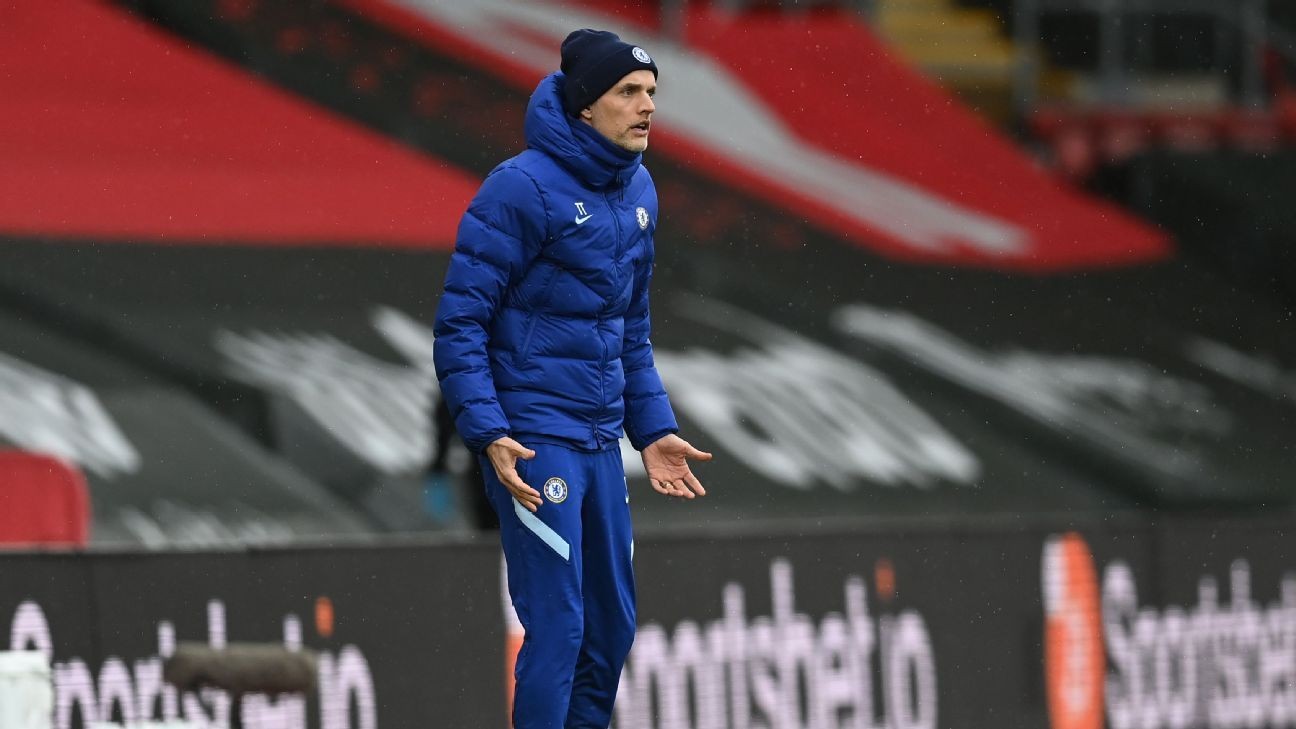 Thomas Tuchel has admitted that losing to Manchester United with Paris Saint-Germain in October 2019 sent him to a "very dark place" for two days but added that his previous encounters can help Chelsea beat United in Sunday's crucial Premier League clash.

The 47-year-old was in charge of PSG when they dramatically crashed out of the Champions League to United, becoming the first club ever to lose a knockout tie after winning the first leg 2-0 away from home.

Marcus Rashford scored a stoppage-time penalty after a controversial handball decision was awarded through a VAR review to give United a 3-1 win on the night -- progressing on away goals -- leaving Tuchel distraught.

"I can be very honest with you, after that match, I was two days in a very dark place," he said. "I can tell you I was not able to speak to anybody or able to think about anything else than this defeat.

"That was maybe the worst defeat that I experienced because it came from nowhere and was in a way, in circumstances where it arrived, two days a dark place for a coach to be at.

"I didn't experience it ever again and not before. It was in the circumstances of this game, how we arrived there, the pressure around the club concerning the round of 16, the history before and the way the result in the first match and the way the second match went, the VAR decision in the last minute.

"It came from absolutely nowhere and that's why this hit was hard to take. Like I said, I was two days in a dark place, then we gave two days off and I still think it was the best for everybody and after that, it is like this in sports sometimes and it is your duty to stand up and to accept a defeat is sometimes necessary to grow and develop and to ask yourself decisive questions.

"That can hurt but the reward was one year later, almost the perfect reward, when we arrived for the first time in the final. We came a long way for that. In some moments you face adversity. It is often sad but it makes you stronger."

PSG lost 1-0 to Bayern Munich in last season's Champions League final and Tuchel was sacked in December despite topping a group which also included two games against United, a 2-1 home defeat and a 3-1 win at Old Trafford.

Chelsea face United aiming to close a six-point gap on Ole Gunnar Solskjaer's side and climb back into the Premier League top four.

"We unfortunately lost both home matches but could win both away games," Tuchel added.

"They were pretty strange results. We hope we can turn this around and win also at home but as you can see they are still unbeaten in Premier League away games and that means the challenge is big.

"They like to have space, play on counter attacks, to use their speed and absorb your speed in their own half and use their speed on the counter-attacks and all the quality they have. But it helps a lot because we played two consecutive years against them. They were tough matches. We will use that knowledge and prepare from tomorrow on."

Tuchel insisted he is a "different coach" from his time at PSG after revealing he sought advice from others in leadership positions, including the headteacher of his two young daughters Emma and Kim.

"[I speak with] teachers, unknown person, teachers of classes," he said.

"The person who runs the school of my daughters, this can be a half-an-hour talk. People who sell stuff. It doesn't matter really.

"It is not important that you speak to the biggest names or the biggest guys out there in the world, It is about leadership with people and that can include teachers and anybody else who have responsibility for people and groups. There you can get inspired.

"But I also talk to leaders of sports, leaders of different organisations and sometimes when there is time and you speak to them, you get influence and you have your notes and years later you go through your notes and find some stuff where you feel more comfortable now. Leadership in my experience is constant change.

"It is also the need to constantly adapt your style to what is needed, to your group and to change yourself, to develop, to grow. I absolutely have the goal that I'm not the same coach anymore like I was in main, in [Borussia] Dortmund or even in Paris. It is simply not possible and not what I want to be.

"Some values stay with me and some methods you constantly change and adapt because this is how I feel my role. I want to be a part of this whole group, of Chelsea and I want to lead by example. I feel very good in the moment and hope we can stay like this."