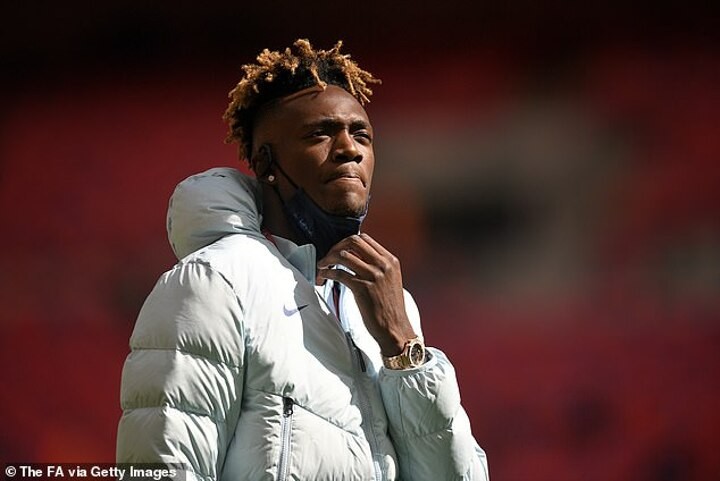 Chelsea manager Thomas Tuchel says he has no regrets about leaving striker Tammy Abraham out of his FA Cup Final squad.

Abraham was not even on the bench as Chelsea lost the showpiece 1-0 to Leicester at Wembley on Saturday.

But today Tuchel warned that it was the kind of decision that could yet impact on other players and said: 'It's just about the amount of people that I can nominate for a game.

'When Kova (Mateo Kovacic) and Andreas Christensen, maybe, come back into the squad, I need to figure out the squad and maybe eliminate two more players.

'This is the worst day and worst decision for me in the whole week. Because since I arrived here everybody deserves to be in the squad. I understand his frustration and it was not the first time. We have other guys with the same situation to face.

Chelsea face Saturday's opponents in the Premier League at Stamford Bridge on Tuesday in what feels like a make or break battle for a top four spot.

Tuchel admitted today the task of securing a top four place has been made harder by Liverpool's last minute winner, scored by goalkeeper Alisson Becker at West Brom on Sunday.

He added: 'I came home in the afternoon and I switched on the TV and saw 1-1. I thought: 'Oh, that wouldn't be a bad result'. I was a bit superstitious and I did not follow it. I checked on my phone in the 95th minute and it was still 1-1.

'Then I checked one minute later and I realised that superstitions don't always work! So it doesn't make things boring. It was a fantastic header. I saw it today and it makes things pretty interesting and tight. But still, it is in our hands.

'Someone asked me after the final if it was a major setback ahead of Tuesday. But no, that was the Arsenal game we lost last week.

'It was our fault that it is so close again. We left the door open and Liverpool put their foot into the door. This is what they do.'

Tuchel also revealed on Monday that the club are willing to talk to German defender Antonio Rudiger about a new contract.

He said: 'Nothing is better than what he is doing for a new contract. If he wants to have a new contract he has our full support to stay at the club. He is speaking with his performances. He has been amazing since day one.'