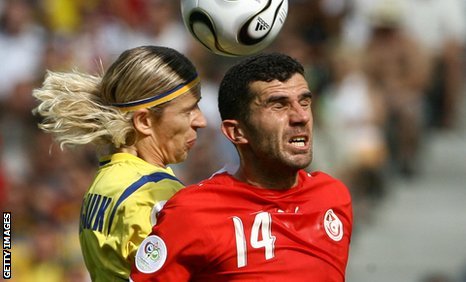 One of Tunisia's most experienced players, Adel Chedli has walked out on the Tunisia squad, days before their Africa Cup of Nations quarter-final.

The 35-year-old appears to have taken the decision because of a lack of game time during this year's tournament.

Chedli was left out of all three of Tunisia's group matches.

He was also reportedly sent to the stands for Tuesday's 1-0 defeat by co-hosts Gabon, after reacting angrily to being omitted from the team.

The midfielder did not play in Tunisia's 2-1 wins over Morocco and Niger in their first two Group C games, which saw the Carthage Eagles through to the last eight of the tournament.

Chedli won his first international cap in 1996 and was part of the Carthage Eagles squad that won the Cup of Nations title in 2004 - their last triumph at the tournament.

He was also part of the Tunisian squad that travelled to the World Cup finals in Germany in 2006.

The Tunisians finished second in the group behind the co-hosts, who won all three of their opening games.

The North African side play their last eight match on Sunday against the winner of Group D.

Chedli's departure follows the expulsion of Zambian Clifford Mulenga for breaking a curfew and refusing to apologise for his actions.