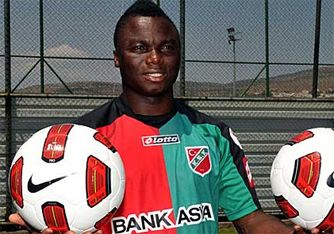 The ambitious club will trump Swedish giants Djurgarden to grab the impressive Heart of Lions striker.

The 20-year-old has made a quicker-than-expected end to his trial stint with Djurgarden and will arrive in Turkey on Monday.

Fiamenyo is expected to hold talks before a deal his sealed for him to make the switch.

The striker excelled in Sweden this week on trial withÂ  Djurgarden and they were expected to open talks with his club about the move.

He scored two goals in two matches for Djurgarden but the rich Turkish club have entered the race and are now likely to sign Fiamenyo.

It is however not known if they will give Fiamenyo a similar welcome as Adiyiah received on Tuesday night when he arrived at the Izmir airport.

Adiyiah, Karsiyakaâ€™s biggest ever signing, was met by more than thousand supporters of the club as he arrived to join the club on loan from AC Milan.