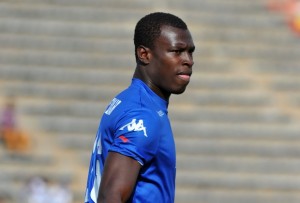 Edwin Gyimah has been linked with clubs in Turkey and Sweden

SuperSport United are willing to let defender, Edwin Gyimah, leave the club in the next transfer window, and have received enquiries from Turkey and Sweden.

The 23-year-old has been in tremendous form for Matsatsantsa over the last two seasons, and has understandably attracted attention from other clubs, though there has been no official bids for him just yet.

Stan Matthews, SuperSport Unitedâ€™s CEO, recently confirmed to the Siya crew that, despite media reports, there has been no official interest from Orlando Pirates regarding the Ghanaian, but has now explained that there is significant interest from overseas.

Matthews said, â€œIâ€™ve been approached by a Turkish club and Mike (Makaab) has brought me an offer from Sweden. Weâ€™re waiting until after the World Cup, and we certainly wouldnâ€™t stand in his way if a move to Europe was on the cards for him.â€

Meanwhile, the crew also spoke to Gyimahâ€™s agent, Mike Makaab, who explained that, while an overseas move was first prize, a transfer within South Africa is not completely off the cards.

Makaab said, â€œThere has been a lot of interest in Eddie from overseas and thatâ€™s obviously first prize for us. The only way heâ€™d move within South Africa is if a really good opportunity came around for him.â€

Gyimah was unfortunate not to make Ghanaâ€™s World Cup squad for Brazil 2014, largely due to an untimely injury, but will be hoping to improve on his form in the upcoming 2014/15 campaign.