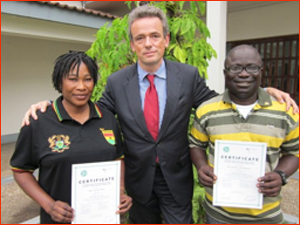 Two Ghanaians have excelled at a coaching course in Germany organized by the German Football Federation (DFB) after sponsorship from the European countryâ€™s government.

The two licensed U17 football coaches Abraham Allotey and Edna Yeke received their certificates from Mr. Hans-Christian Winkler, Deputy Head of Missions at the German Embassy in Accra.

The two trainers were invited by the German Ministry of Foreign Affairs to attend a two-week (B-level) coaching course organized by the DFB at the Sports Centre Hennef in Germany.

The international DFB coaching course (B-Level) took place from May 3rd to 14th, this year in Hennef, and was financially supported by the German Ministry of Foreign Affairs.

It was attended by 30 licensed football trainers from 25 countries from around the world with the aim of obtaining the international DFB Coaching Certificate.

Requirements for participation were not only physical fitness and a very good command of the English language, but also adequate experience in adult and junior soccer training.

The training and concluding examination included subjects such as "promotion of talents", "sports law" and "sports medicine".

Moreover, the course involved visits to the coaching center facilities of the Bundesliga club one side FC KÃ¶ln as well as to the international football match between Germany and Malta in the German city of Aachen on May 13th.

Each participant received a set of sports equipment.