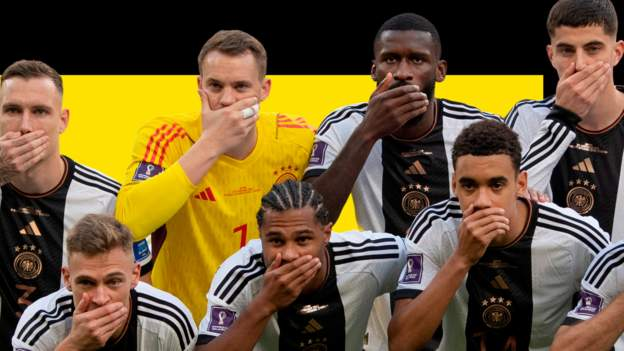 It does feel like there are two parallel universes when it comes to the controversies around this World Cup.

For the advocates, the activists, the European teams and especially the seven captains who had intended to wear the One Love armband, this is an LGBT and human rights issue they want to remain vocal about.

For hosts Qatar and those spectators who've come here or who are watching around the Arab world, which has a vast Muslim majority, this is about religion, culture, the norms of the region and mostly about respect which they don't feel they're getting.

The tension seems to be the perpetual undercurrent of the tournament so far and it's all playing out here on the world's biggest of stages.

On Wednesday, Germany players covered their mouths during the team photograph before their World Cup opener against Japan, with manager Hansi Flick saying it was "to convey the message that Fifa is silencing" teams.

However, the reaction to Germany's stance has had fierce and almost unanimously negative reactions around the Arab world.

The hashtag Germany-Japan was trending in Arabic for all the wrong reasons for the German team. Many calling their 'mouth cover' stance in support of LGBT rights "insulting' and "provocative", with some asking Fifa to put more pressure on players.

"You come to us, you respect our religion, our culture, our norms and our laws - otherwise you can put your hands wherever you like," said one tweet.

Another said: "Hunger, poverty, water shortages and many other global problems and you chose only this to be your cause."

One Facebook post, addressing the Arab and Muslim fans at the Qatar World Cup said: "If they [German team] are standing by this cause, be proud of your religion and stand by it too."

The Germany gesture is the latest step in the row between football's governing body Fifa and several European teams who had planned for their captains to wear a OneLove armband during matches to promote diversity and inclusion, until Fifa threatened to give them yellow cards.

Germany - who won't face any disciplinary action for the 'mouth cover' gesture - said it "wasn't about making a political statement", adding: "Human rights are non-negotiable. Denying us the armband is the same as denying us a voice. We stand by our position."

This is more than just controversy over a football tournament.

For many Arabs this hits a raw nerve. Many here in Qatar are asking why there wasn't a similar uproar when Russia hosted the World Cup in 2018 or when China hosted the Olympics in 2008; both countries with their own human rights issues.

When Qatar won the bid to host the tournament it was seen as an Arab victory. Finally, one of the biggest sporting events in the world was coming to a region known mainly for its conflicts.

"This is not just for Qatar," a Qatari fan told me as we watched the opening ceremony together. "It's for all Arabs and Muslims."

Any criticism of the organisers seems to be taken as a judgement on the whole region and its fitness as a legitimate host on the world stage - especially when it comes to prestigious events like the World Cup.

But it also seems that Qatar has been taken by surprise at the level of scrutiny it's coming under - having invited the whole world to its own backyard.