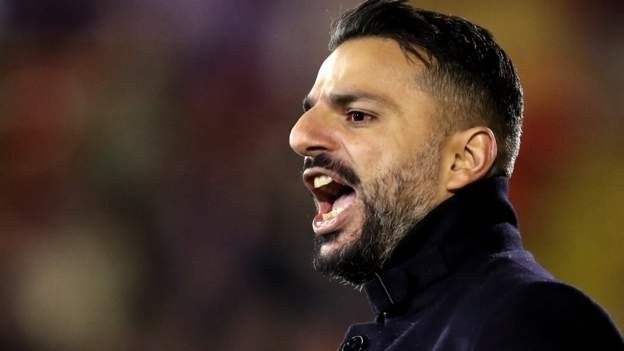 Goalkeeper David Marshall got a hand to Quina's left-footed shot but the ball bounced in off the underside of the bar.

Barnsley had lost their previous six league matches and were without a win in 13.

Rangers had not lost in seven league games but badly missed forward Chris Willock, who was ruled out of the trip to Oakwell after picking up an injury in training.

They struggled to create clear-cut chances, although Lyndon Dykes should have equalised in the final seconds but was unable to connect with Yoann Barbet's cross.

The 74th-minute goal came after Barbet and then Moses Odubajo gave away possession.

Barnsley remain bottom but the five teams immediately above them all lost, enabling Asbaghi's side to close the gap to second-bottom Derby to just one point.

QPR, who remain fourth, have lost five and drawn one of their past six matches against Barnsley, who have been a bogey team for them in recent seasons.

Attempt missed. Callum Styles (Barnsley) left footed shot from outside the box is high and wide to the left. Assisted by Devante Cole.

Remy Vita (Barnsley) wins a free kick in the defensive half.

Amine Bassi (Barnsley) wins a free kick in the defensive half.

Goal! Barnsley 1, Queens Park Rangers 0. Domingos Quina (Barnsley) left footed shot from outside the box to the high centre of the goal. Assisted by Claudio Gomes.