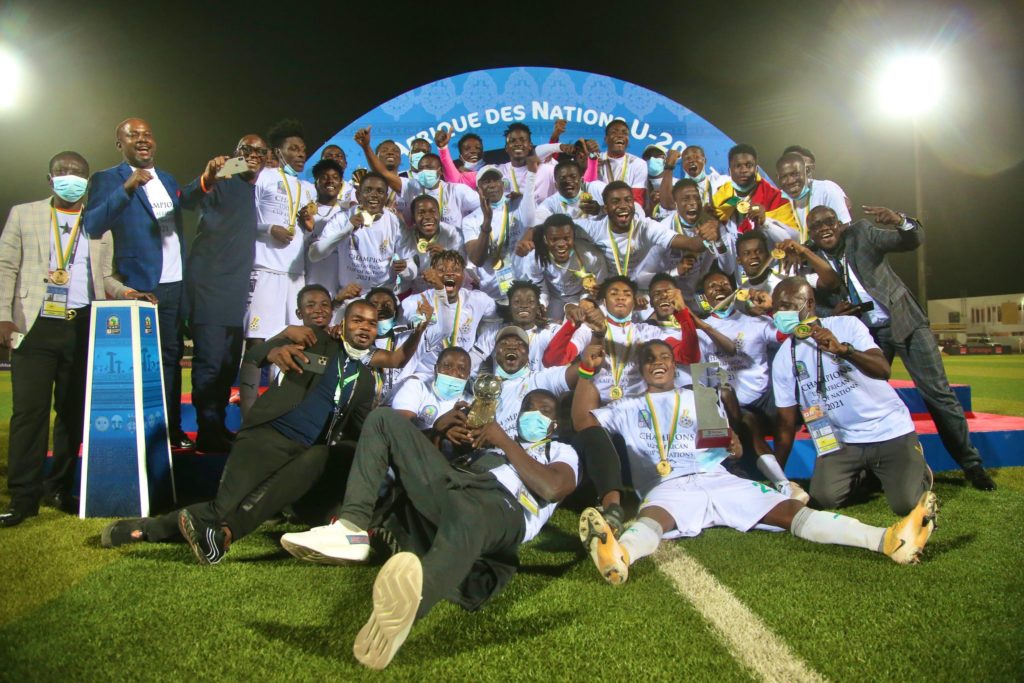 The Black Satellites were crowned kings of Africa for the fourth time on Saturday after beating Uganda in the U-20 Africa Cup of Nations final.

It was Ghana’s second triumph in Africa in the 21st century.

But how has a win for the country’s brightest football talents become a debate over how football should be played?

Coming into the tournament, there was a lot of optimism, but after two games, the doubts started to set in: uninspiring performances against Morocco and Gambia, caused uproar among the footballing community in Ghana.

Ghana eventually finished 3rd and went through as the one of the two best third-placed teams.

There were school of thoughts that already wanted Coach Karim Zito sacked during the tournament, others preached patience and time. The truth is probably somewhere in the middle.

Another drab showing against Cameroon, where the team almost got knocked out, was salvaged by penalties.

Then came the turning point at the climax of the tournament; the re-match with Gambia which was a well-executed showing from the team, proving that the players and the coach learned from their initial loss in the group stage.

The Black Satellites continued to improve and played their best game in the tournament against a strong Ugandan side.

So why are people angry? We won the trophy right? Yes. But the manner in which the trophy was one is not something Ghana should be over-exuberant about.

Put it like this, if this tournament were to be restarted, what chance would you give Ghana to win it? Also, supposing the World Cup was to come off, will these crop of players have what it takes to compete like the 2009 squad did?

From the WAFU Zone B tournament in November till the U-20 Final, Ghana played 10 games, and only won 5. What is even more worrying about these games were that almost 50% of goals scored came from set-pieces and long range strikes.

Any football coach or analyst will tell you this is a sign that your style of play is unsustainable. You cannot go into every football match with your fate depending on if somebody can put a ball into the net from 40 yards.

There was a lot of papering over the obvious cracks in this tournament; before the tournament there were allegations of bribery and player selection scandals, there was almost never a consistent group of starters and there was concern over some of the players who just appeared in the squad list from out of nowhere.

This is also not a good sign for the growth of Ghana football, it puts talent identification under serious scrutiny; where and how are players being scouted? Are they good enough? Or are some external forces controlling their place in the team?

An impending issue in Ghana football has been about bridging the gap between the youth levels and the Senior National team, but how are these players supposed to make it into the team? Based on merit or based on who they know?

There were very questionable player selections in the team in both tournaments and nobody knows how or why, but for a country that wants to be a football powerhouse, a lot of thought has to go into the country’s football methodology and which players fit into it. better look at the football they play.

Baba Mensah, Derrick Mensah, Francis Narh. Do these names sound familiar? These players were in the squad for the 2013 Under-20 African Championships but they faded away with time after Ghana went all the way to the final in that edition.

Almost every squad Ghana has had at youth level never make it to the Black Stars, and one of the major reasons is what has been mentioned above: they play on teams built and coached to “win” and their development after winning is left to the wind.

As a football nation, a lot more focus on should be thrown on the technical direction. The narratives, the drama, the hype should be left out of it.

In a few years, where does Ghana see these group of players? Is it enough to put a group of players together and hope they win again or the country has to buckle down and put in place structures to make sure that Ghana experiences continuous success at youth level which translates to the national team?

Bear in mind, the current Under-17s failed to make the upcoming AFCON tournament, and the Under-23s failed to qualify for the Olympics. These two failures will be buried by the shiny, glamorous trophy win by the Satellites.

Let’s get one thing clear, both sides of this “debate” are not right. The voices of criticism was not aimed at the team or Zito; it was aimed at the structures that were doing a poor job of facilitating their success.

How this trophy win is viewed will be key in the development in the football in Ghana. Do Ghanaians see this win a seal of approval and an indicator that there is nothing wrong with our youth teams or, does this triumph translate into a step to get better by improving upon what the country have for the future of these players? The choice is yours.

Remember, with all things being equal, in the next five years, this same crop of players who conquered Africa should have what it takes to repeat this feat at senior level. To achieve this, development has to be tracked, engineered and maximized.