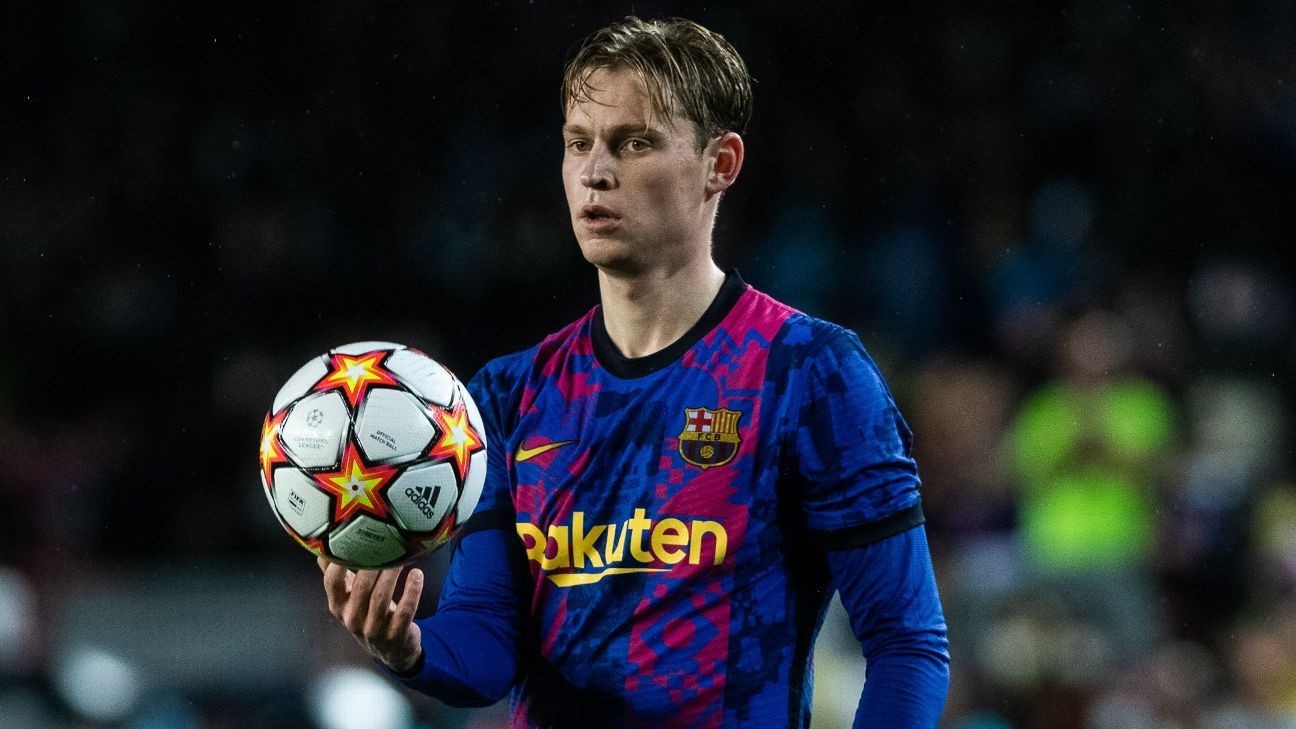 Matchday 5 of the Champions League group stage saw another clutch of Europe's biggest club secure their place in the knockout phase with Chelsea, Inter Milan, Manchester City, Manchester United, Paris Saint-Germain, Real Madrid and Sporting CP all putting the names in the hat for the round-of-16 draw.

We asked Mark Ogden, Julien Laurens and Sam Marsden to answer some of the big questions arising from this week's matches.

What caught your attention on Matchday 5?

Ogden: Haris Seferovic's miss against Barcelona, in the 93rd minute of Tuesday's 0-0 draw at Camp Nou, not only denied Benfica a 1-0 win which would have left Barca needing a miracle to qualify from Group E but it also robbed us of a potentially seminal moment in Champions League history.

Barca are on the ropes right now and Seferovic could have earned a place in football folklore by scoring a goal which would surely have ended their 20-year streak of reaching the knockout phase. Images of him celebrating the winner could have matched those iconic moments of Jose Mourinho sprinting down the Old Trafford touchline as Porto manager or Steven Gerrard's crucial winner for Liverpool against Olympiakos in 2004-05.

But the Switzerland forward ended up producing one of the misses of the season by skewing his shot wide from close range. Who knows how significant the miss may prove to be?

Laurens: Thiago Alcantara's exceptional goal for Liverpool in the 2-0 win against Porto. Not many players, let alone a defensive midfielder, can hit a half-volley like he did: so pure, so precise, so beautiful. Thiago is an incredible baller with a technical ability, a football IQ and vision way above many other players in his position. He can dictate the pace of a game and control a game like no other.

A lot of what Liverpool will or will not achieve this season will be down to his fitness and his performances. When he is in the kind of form that we saw against Porto or against Arsenal last weekend, he gives another dimension to this Liverpool side. And his goal on Wednesday was certainly a reminder of that.

Marsden: Borussia Dortmund's exit. It's been a tough few weeks on the sidelines for the injured Erling Haaland. First he saw Norway's World Cup dream go up in smoke as they dropped points against Turkey, Latvia and Netherlands. Now he's seen Dortmund exit the Champions League after a 3-1 defeat to Sporting.

The German side had six points from nine when Haaland got injured and looked a good bet to make the round of 16, but back-to-back defeats since then mean the Europa League awaits them in 2022. With Ajax and Besiktas completing the group, you'd have expected them to make it through.

Better for Barcelona: Sneak into the round of 16 or try to win the Europa League?

Laurens: Qualifying for the Champions League round of 16 is way more important for Xavi and Barcelona. Financially, they need the revenue that these two games (and maybe more) will bring. In terms of their standing, they also need to go through. They don't need to hit another low point as they try to build their way back to the top.

And at least there would be no pressure if they go through in the Champions League. No one will bet on them to go further and make it to the quarterfinals, so that would work for them. On the other hand, if they go into the Europa League then the pressure will be huge, everyone will expect them to win it. They are likely to go far, which means more games and less time for Xavi and his players to focus on LaLiga.

Marsden: Staying in the Champions League is better for Barcelona, even if that means another round-of-16 exit after last season's chastening 5-2 loss on aggregate to Paris Saint-Germain. The prize money and prestige in Europe's elite competition is much higher. Success (and thus more matchday revenue) is far from guaranteed in the Europa League, either, as traditionally bigger teams have found out in the past.

It's not even like the competition would provide a platform for a talented generation of youngsters. They're all already playing. An injury crisis has pushed Barca's thin squad to the limit and a free midweek would be more welcome than the Europa League.

Ogden: Playing in the round of 16 will be worth more to Barcelona, both financially and in terms of prestige, than winning the Europa League. They simply have to do all they can to avoid the ignominy of dropping into a competition that will only heap more humiliation on the club.

I think they're doomed to the Europa League now anyway because if, as I expect. Benfica beat Dynamo Kiev then Barca have to win at Bayern Munich, and that isn't going happen. The only positive of being in the Europa League is that it may give Barca their best hope of playing in the Champions League next season, but they have to throw everything at beating Bayern because the Europa League really is the "Twilight Zone" for clubs as illustrious as Barcelona.

Shaka Hislop says Man United were uninspiring vs. Villarreal and only won thanks to the heroics of Cristiano Ronaldo and David De Gea.

All four English clubs top their group; rank them in order of likeliest to win it all

Marsden: Chelsea, Manchester City, Liverpool and then Manchester United -- although you could make an argument for any order of the top three. I'll give Chelsea the edge because they have been transformed under Thomas Tuchel. They won the competition last season, battered Juventus this week, lead the Premier League and are so tough defensively.

City and Liverpool are pretty much on the same level, though, with two of the game's best coaches and squads packed with talent. United are lagging behind but can't be ruled out.

Even at 36, Cristiano Ronaldo's proved decisive in Europe this season and a new coach will surely get more out of an expensively assembled team.

Ogden: Liverpool, Manchester City, Chelsea and Manchester United. Liverpool are a team in their prime with a winning pedigree in the Champions League and yes, they have Anfield, which is a huge advantage in the knockout phase. I rank Liverpool as favourites to win the competition.

City will always go close and are as good as any team in the Champions League, but their lack of a centre-forward puts them behind Liverpool and Bayern Munich.

Chelsea? Last season's success proved they can win it and their coach is their ace card. But I'm not sure they have the goals to beat the very best this time around.

As for United, they are rank outsiders, but a top coach could organise them to win it. They have the attacking quality, David de Gea is back to his best and, as Chelsea (2012 and 2021) and Liverpool (2005) proved, the best team in Europe doesn't always win the Champions League.

Laurens: Manchester United are definitely bottom among the English clubs. I am not even sure how they ended up top of their group. For the other three, however, good luck trying to separate them.

There is a reason why Liverpool and City drew in the Premier League (2-2), why the Reds also shared a point with Chelsea in the league (1-1), while the champions won narrowly at Stamford Bridge: there is not much at all between those three. They are all impressive, in confidence, with managers at the top of their game, a marvellous team spirit and unity.

Chelsea are probably the most solid defensively, City the most fluid in attack and Liverpool can hurt you in so many ways. If I have to rank them, and I find it really hard, I would go Manchester City first then Chelsea and then Liverpool. But ask me again tomorrow and I would probably go Liverpool, Chelsea and City!

play2:05FC pundits lay into PSG for lack of effort vs. Man City

On Thanksgiving, what are you thankful for in this season's competition?

Ogden: Sheriff Tiraspol. Yes, the story of the Moldovan champions is far from a modern-day football fairy tale, with their wealthy backers ensuring almost total domination of their domestic league with 19 of the last 21 titles, but in Champions League terms, they are absolute minnows.

Sheriff's home win against Shakhtar Donetsk on Matchday 1 was a story in itself, but to then beat Real Madrid at the Bernabeu was an incredible shock and one which the Champions League needed on the back of the failed Super League breakaway last season. It will be the usual suspects in the knockout phase, but Sheriff have shown that even the smallest teams are still capable of landing a blow on the heavyweights.

Laurens: I am thankful for the amazing record of French players! Sebastien Haller (who was born in France, but plays international football for Ivory Coast) is on fire with Ajax with nine goals in five games. He has been unstoppable and is leading Ajax towards their best-ever group-stage campaign in the competition. He is the Champions League's top scorer, along with Robert Lewandowski.

And what about Christopher Nkunku? He is not even a striker in the traditional sense of the word but with seven goals already, including a hat trick against Manchester City, he is third in the scoring chart. The born-and-bred Parisian is such a rare talent who is versatile, clinical and so elegant too.

Then, you have Karim "The Dream" Benzema with five goals, French-born Algeria international Riyad Mahrez with four, Antoine Griezmann with three, Kylian Mbappe with two and Kingsley Coman with one. Vive la France and our goal scorers who are lighting up the Champions League this season so far.

Marsden: Ajax. The Dutch club's ability to rebuild should be a lesson to Europe's biggest spenders. The majority of the stars of their semifinal run in 2019 have left but coach Erik ten Hag has constructed a new team that looks capable of matching that feat.

Ten Hag's squad consists of a mix of youngsters, players that had been discarded elsewhere and hidden gems unearthed by a brilliant recruitment team. Pinning everything together is a clearly defined playing style which is pleasing on the eye. Everyone knows their role.

Highlights in the current campaign have included 5-1 and 4-0 wins against Sporting Lisbon and Borussia Dortmund, respectively, as Ajax cantered through the group stage with five wins from five.