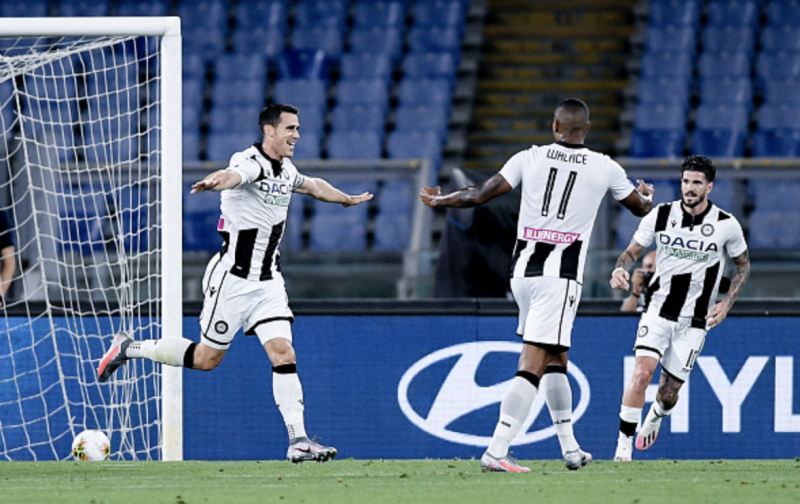 Udinese stunned 10-man Roma with a 2-0 victory at the Stadio Olimpico on Thursday, ending their nine-match winless run in Serie A and subjecting the hosts to a second successive defeat.

Kevin Lasagna opened the scoring early in the first half before Diego Perotti was sent off for a rash tackle, and substitute Ilija Nestorovski secured the points late on.

It was Udinese’s first Serie A win since 12 January and only their third away victory of the season, while the result also ended a rotten record of six straight defeats against the Giallorossi.

The win could be significant for the Zebrette’s survival hopes, as it moves them into 14th place and six points clear of the drop zone.

But Roma’s faint hopes of a top four finish now look dead in the water, with a 12-point gap separating the fifth-placed Lupi from Atalanta above them and Napoli, Milan and Verona creeping up behind them. The hosts were without Jordan Veretout and Lorenzo Pellegrini through suspension and Gianluca Mancini had fallen ill, but Paulo Fonseca wielded the axe with eight changes to his starting line-up, including a rare start for Nikola Kalinic in the place of Edin Dzeko.

Midfielder Rodrigo De Paul returned from suspension for the visitors, who made five changes to the side that lost 3-2 to Atalanta last time out.

The visitors started in impressive fashion and were in front after just 12 minutes when De Paul’s wayward volley turned into an accidental assist for Lasagna to finish from six yards. Things got worse for the hosts on the half-hour mark as captain for the night Diego Perotti was shown a straight red card for a rash studs-up challenge on Rodrigo Becao, who was thankfully able to continue.

The adversity finally sparked some life into the hosts’ hitherto lacklustre performance, as Bryan Cristante’s deflected strike rattled the crossbar before a curling Cengiz Under effort drew a flying save from Juan Musso.

Roma’s newfound thrust reappeared after the break as Carles Perez had two shots well saved by Musso in the space of five minutes, but Udinese threatened to double their lead when De Paul’s cross-field pass reached an unmarked Stefano Okaka, only for the striker to skew his volley wide. The visitors continued to push for a second as substitute Lukasz Teodorczyk finished a breakaway nicely before being flagged offside, but the game was put to bed on the 78th minute when De Paul got to the byline and pulled a pass back to Nestorovski for an easy finish.