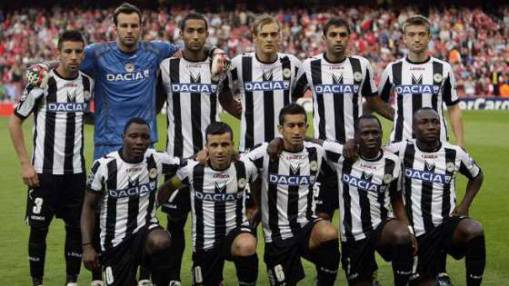 In the summer of 2012, the future of Udinese Calcio was to take a dramatic turn for the worse

Only the year before the Zebrette, who are second only to Genoa in being the oldest of Italian football clubs, were vying for as place in the UEFA Champions League group stage. The stage was set for a dramatic clash with Arsenal, with the Gunners eventually emerging triumphant but not before Udinese reminded the footballing community of their pedigree; much of which was encapsulated by club captain Antonio Di Natale. Noted for their impressive turnover of exciting prospects, the same period saw the club sell future Arsenal star Alexis Sanchez to Barcelona for fee thought to exceed €40 million. For a club that seemed for all the world to be going places, what followed killed that reality.

Giampaolo Pozzo, who bought Udinese amidst a betting scandal that threatened to cast the Zebrette out into the wilderness, was about to extend his empire. The Italian businessman had already bought Spanish side Granada in 2009, using the near bankrupt team as a farm for his more promising players. Granada returned to La Liga after a 35-year absence from the top division, coinciding with Udinese’s attempted European run in 2011. However, despite their raised status under the ownership of Pozzo, Granada never truly threatened to derail any ambitions Udinese may have had; with the rewards to be had in Spain limited, to say the least.

But in 2012 it all changed. Pozzo revealed himself as the unlikely owner of aspiring English side Watford. With a seemingly unassailable mountain in Serie A made up of the Italian elite, namely Juventus, Inter and AC Milan, Pozzo saw potential elsewhere and like any businessman, he sought to secure it for himself. From a purely neutral perceptive it is hard to fault Pozzo for his purchase of Watford. His decision-making was fuelled primarily by ambition rather than greed, making a gamble that any man in his right mind would have made in his position. However, from the view of a passionate Calcio fan, Pozzo had effectively shelved Udinese as a club.

What would follow was a consolidation of power. Pozzo moved countless players between his three clubs. As many as 11 promising and talented football players left Udinese’s first team over this period to join Watford, not the mention many others from Granada. Matej Vydra, who arrived in Udine as Czech Revelation of the Year, would soon join Watford and scored 22 goals in 47 appearances. Fernando Forestieri, who after a number of loan spells seemed ready for the step up to Serie A, went instead to Watford where he also blossomed. Cristian Battochio, Joel Ekstrand, Almen Abdi and Diego Fabbrini all shared the same fate.

Granada, who hadn’t seemed as much a threat as Watford, started taking a bigger slice of the cake. Odion Ighalo, who joined Udinese in 2008, made a name for himself at Granada before establishing himself as Watford’s primary goalscorer alongside Troy Deeney. The Nigerian, who chalked up 15 goals in 37 appearances last season in Premier League, has just one goal in six appearances for Udinese. This reallocation of resources has relegated Udinese to below Watford but above Granada, a reality Udinese fans have had difficulty accepting. From a business point of view Pozzo has been shrewd and wise, but damned Udinese in the process.

Purely for the case of argument it is worth mentioning the natural demise of Udinese. The departure of Francesco Guidolin as head coach left far too many problems unresolved, with Andrea Stramaccioni, Stefano Colantuono and Luigi De Canio all trying their hand at the helm but failing all the same. The aforementioned Di Natale has since hung up his boots, bringing to an end an illustrious career and perhaps more importantly an infamous period for Udinese. The 38 year-old has played alongside some formidable strikers, perhaps most notably Fabio Quagliarella and Vincenzo Iaquinta, who constituted part of a bright period in the club’s history. The continued success of Watford in the Premier League threatens to derail such moments ever transpiring again in Udine.

Fortunately for Udinese fans there is hope. The modernisation of the Stadio Fruili, which now goes by the name the Dacia Arena, puts Udinese ahead of many of their rivals in their quest for superiority. Granada are no longer part of Pozzo’s extensive empire having been sold this summer to Chinese businessman Jiang Lizhang. Watford are also no longer owned exclusively by Pozzo, but rather his son, Gino Pozzo. The connection between all three clubs will likely remain strong for many years to come, in particular Watford, but hope remains that Udinese will return to having it’s own future and it’s own ambitions once again.