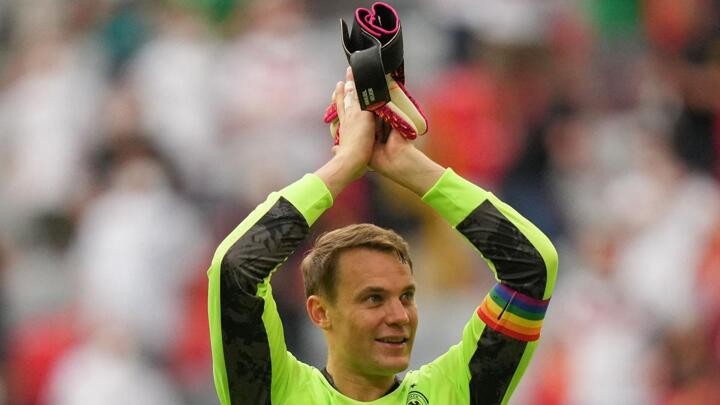 UEFA has confirmed Germany's Manuel Neuer will face no punishment for his show of support to the LGBTQ community at Euro 2020.

Bayern Munich stalwart Neuer wore the armband in Germany's first two games of Euro 2020 – a 1-0 defeat to France and 4-2 win over Portugal.

The rainbow flag is a symbol of the LGBTQ community, for which Neuer was showing support as countries across the world celebrate 'Pride Month'.

But reports emerging on Sunday suggested he could face censure from UEFA for his choice of armband.

European football's governing body had apparently deemed the rainbow flag a political statement, which are prohibited in UEFA competitions.

DFB press officer Jens Grittner confirmed proceedings had been opened, saying: "It is true that the captain's armband is being checked. We will also discuss this with UEFA.

"The regulations state that the armband officially provided by UEFA must be worn. June is also a year of 'Pride' in sport to stand up for more diversity.

"This year the DFB is participating with various campaigns. Manuel Neuer has been wearing the rainbow armband since the friendly against Latvia on June 7 as a symbol and clear commitment of the entire team to diversity, openness and tolerance and against hatred and exclusion. The message is: we are colourful! "

However, the German Football Association (DFB) later confirmed that UEFA had already halted the investigation.

A statement read: "UEFA have today shared with the DFB that they have stopped the review of the rainbow captain's armband worn by [Manuel Neuer].

"In a letter, the armband has been assessed as a team symbol for diversity and thus for a 'good cause.'"

UEFA has already faced criticism for disregarding the LGBTQ community with its choice of Euro 2020 host cities.

The Hungarian capital, Budapest, has held a number of group-stage fixtures already and is reportedly in the running to take the semi-finals and final from Wembley due to coronavirus concerns.

Hungary's parliament recently passed legislation banning content it believes promotes homosexuality or gender change from its schools – a move which has prompted fierce criticism from the international community.