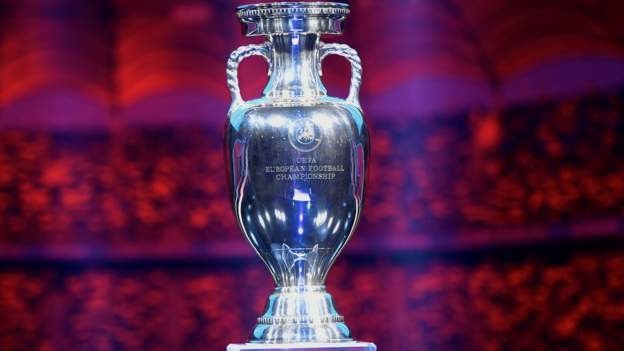 Uefa says this summer's European Championship will still be held across 12 cities, despite concerns over the coronavirus pandemic.

A decision on whether fans will be permitted has been delayed until April.

The competition is due to begin in Rome on 11 June, with the final at Wembley on 11 July.

It was postponed in March last year when the pandemic first emerged.

There had been speculation that this year's finals could be staged in one country to reduce travel if restrictions still apply.

Following a meeting of host associations on Wednesday, Uefa said that "all parties recognise the need for flexibility around decisions to be made on the arrangements for the tournament".

Host associations had been asked to submit plans to accept fans in a number of different scenarios by 5 March but the European governing body confirmed that "the deadline for the submission of plans to accommodate fans inside the stadiums has been moved to early April".

Uefa president Aleksander Ceferin said: "I am optimistic that things are highly likely to be very different with regard to the virus as we move closer to the tournament.

"It is important that we give the host cities and governments as much time as we can to formulate an accurate picture of what will be possible come June and July.

"Fans are such a big part of what makes football special. We must allow ourselves the maximum space to allow their return to the stadiums."

I'm Not A Monster: Hear from the American mother inside an Isis caliphateFKA Twigs x Louis Theroux: Female inspirations, online trolls and her relationship with Shia LaBeouf