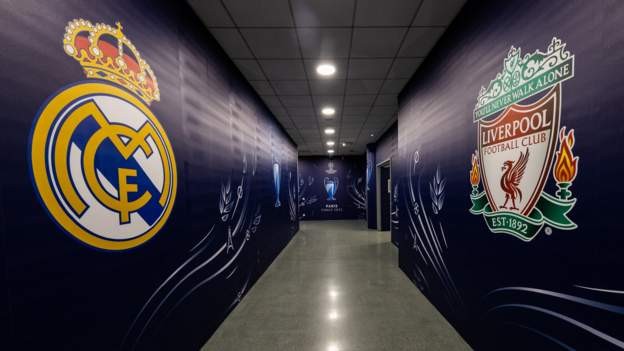 Liverpool will play Real Madrid in the Champions League final

Uefa's allocation for wheelchair users at the Champions League final "is bordering on exclusion and discrimination", says the Liverpool Disabled Supporters Association (LDSA).

Liverpool will play Real Madrid in Saturday's game at the Stade de France, which has 550 wheelchair user spaces. external-link

Uefa says it has provided 93 wheelchair positions for the match, with each team getting 38.

"We're really angry about it," said Ted Morris, secretary of the LDSA.

Level Playing Field - a campaign group for disabled sports fans - has written to Uefa to ask about the issue.external-link

The final is to be played in Paris after St Petersburg in Russia was stripped of the match following the nation's invasion of Ukraine.

"For an event of this size, Uefa would usually aim to identify a higher number of [wheelchair] positions, but due to operational constraints (e.g. security, poor view, etc.) and the short preparation time, it was not possible to implement optimal solutions for more wheelchair positions," said European football's governing body.

Morris spoke about two boys who sit close to him for games at Anfield and who will not be able to go to the final because of the lack of tickets for wheelchair users.

"It's not fair when bays are available. It is just wrong," said Morris.

"I'd like Uefa to clarify what they are being used for. This affects both teams."

Morris said he will be going to the game with a "tinge of sadness" because of the situation and added: "Liverpool have done everything in their power to help with this."

Overall, Liverpool and Real Madrid have each received 19,618 tickets for the game, which has a capacity of 75,000.

A further 12,000 tickets were put on general sale via a ballot, which closed before the semi-final second legs were played.

Uefa president Aleksander Ceferin said the distribution and pricing of Champions League final tickets is "the system that works" as it aids clubs.