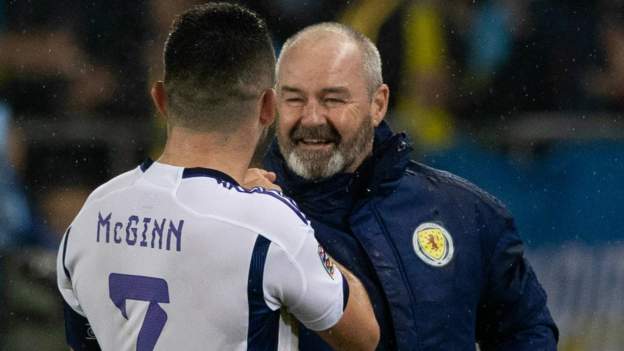 The Scots drew 0-0 in Ukraine to earn promotion to the top tier of the competition, and ensure they will be in Pot 2 for the Euros qualifying draw.

The draw will be on Sunday, 9 October, with the top two in each section qualifying for the finals in Germany.

"I don't think with this group of players we'll need it," Clarke said.

"We've reached Pot 2, the A-group of the Nations League. We don't want to stop. We want to keep getting better if we can."

"We've done it again and taken this campaign to the last game. I asked the players to take the next step, so we can show everybody we're improving."

The draw against Ukraine in Krakow added to the 3-0 win in the reverse fixture at Hampden and another home win against Republic of Ireland in this window, as Scotland recovered from a disappointing summer.

Clarke's side were beaten by Ukraine in the World Cup play-off in June, and followed it up with a 3-0 loss in Dublin.

But they responded strongly despite the absence of several key players at various stages, including captain Andy Robertson, Kieran Tierney, and Scott McTominay, while also changing from a back three system to 4-3-3 or 4-2-3-1.

"I sat down with the whole staff and said we have to set a different environment, we have to be more demanding of the players," Clarke said of the aftermath of the June games.

"Then I sat with the players and gave them a lot of information to change the system and play a slightly different way.

"These players are desperate to do well for their country, they've taken it on board and we've had a really good week."

Injuries meant Hibernian defender Ryan Porteous was thrown in for his debut alongside Jack Hendry, who has barely featured since joining Cremonese on loan this season, but both were solid.

Aaron Hickey performed brilliantly again at right-back, having featured since Nathan Patterson's injury in the first Ukraine game. It showed the depth Clarke now has, and his ability to use it.

"We're building something," midfielder John McGinn said. "It'll hurt us not being in Qatar [for the World Cup]. I won't watch many games, I don't know if the boys will.

"But we want to build something for our generation, and those moving forward. The task now is to stay around [Nations League] division A and in Pot 2, try to sneak into Pot 1.

"We need to balance ambition and be realistic. But we've got good players and strength in depth. I'm sure it's a great time to watch Scotland at the moment."