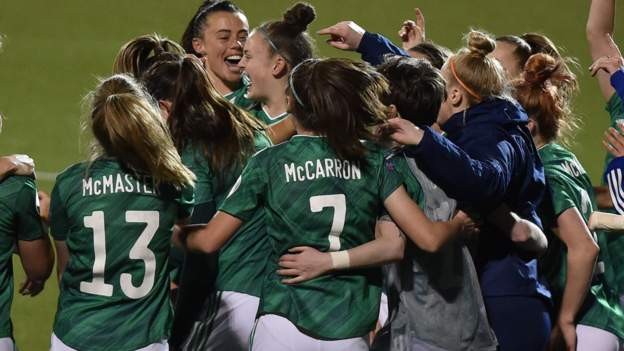 Northern Ireland manager Kenny Shiels has described his side's Euro 2022 qualification as the "best ever sporting achievement in the UK".

NI defeated Ukraine 2-0 in the second leg of their play-off in Belfast to complete a 4-1 aggregate victory.

It is the first time in their history that the country has reached the finals of a major international women's tournament.

"You have to take this in its context," said Shiels.

"These are amateur players, 16 of the panel play in the Irish League for the likes of Glentoran, Linfield, Cliftonville and Crusaders. I am so grateful to the clubs but they are playing against players who play for the top teams in Europe.

"It is incredible what they have achieved, incredible. Unbelievable. I look at my staff and there are grown men crying and I am nearly in bits myself, but it is down to the girls at the end of the day.

"When I came in in 2019 the girls were traumatised and I was the new face. I might have helped a little bit but they were self-driven and they took it on."

Captain Marissa Callaghan opened the scoring for Northern Ireland in the second half and substitute Nadene Caldwell added a second in the final minute of injury time on a history-making night at Seaview.

Having secured a surprise 2-1 away victory in the away leg on Friday, Shiels' team ensured their passage to the finals in England next summer despite being without talismanic attacker Rachel Furness. who broke her ankle in the first leg.

"I felt sorry for Ukraine at the end," Shiels added.

"I was nervous today, I couldn't get rid of my nerves so I went to my room, but as soon as I got here on the pitch I was so comfortable. I don't know what weird way that was happening.

"There are people in the world who have terrible diseases and we are worried about losing a football match. I feel very guilty about that but by the same token, the inspiration the girls give each other can't be overlooked. They are a great bunch of people, they really are.

"They are the best achievers of all time. There is nobody can match what they have done, nobody."