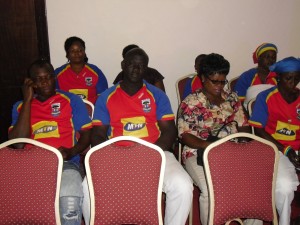 Hearts of Oak has extended the deadline for its Initial Public Offer (IPO) of club shares to a further two-weeks, GHANAsoccernet.com has gathered.

A total of 20million shares was released for sale to the general public from August 1 but under subscription of the shares have necessitated the deadline extension which originally elapsed on Monday, 29 August.

Various supporter groups nationwide have also complained of lack of education and share purchasing forms for them to also stake a claim to their darling club.

This has led to the embarking of a nationwide education tour by supervisory body, Strategic African Securities (SAS) in their bid to at least achieve the minimum target of raking in a whooping 10million Ghana cedis foir the former African Champions.

The chunk of the targeted amount would be used to retire the choking debts of the club with the rest being invested in the playing body and financing projects such as a new training pitch, a club house, state of the art gym and to revamp its various media outlets.

The new deadline date has now been fixed for September 12.