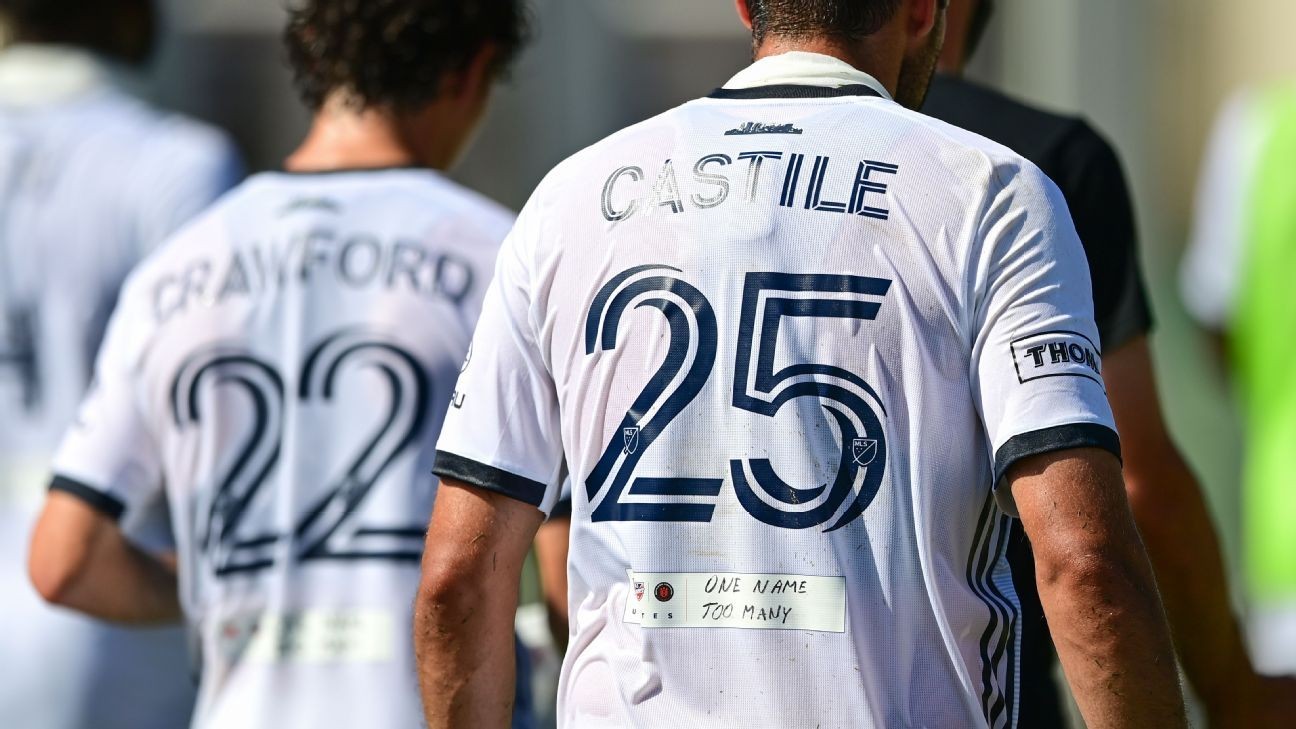 Philadelphia Union players came out for Thursday's MLS Is Back Tournament match in Orlando, Fla., against New York City FC with the names of Black victims of police brutality on the backs of each of their jerseys.

The team shirts also bore the message: "One name, too many" at the bottom in solidarity with the Black Lives Matter social justice movement.

The Union players walked out wearing "Black Lives Matter" T-shirts, but proceeded to take them off for the team photo, turn around, and reveal that their surnames on the back of their shirts had been replaced by victims of police violence, including (Breonna) Taylor, (John) Crawford, (Eric) Garner, (Alton) Sterling and (Tamir) Rice.

"Our players stand together," read a tweet by the team. "One name too many."

The Philadelphia Union's jerseys are honoring the names of members of the Black community who lost their lives to police brutality. pic.twitter.com/NWQZrlgvpq

The Union players also wore shinguards during the match, which took place inside ESPN's Wide World of Sports Complex, that read "enough is enough," with the hashtag "end racism" and a raised fist pictured.

On Wednesday, more than 100 Black MLS players raised their right fists and took a knee before the tournament opener in a similar show of solidarity.

At that match, some players wore T-shirts over their jerseys with the words "Black and Proud" and "Silence is Violence" before the match between Orlando City SC and Inter Miami CF, and both teams' starting players as well as the referees took a knee before kickoff.

-- Stream MLS is Back on ESPN networks, app | FC Daily on ESPN+
-- The Undefeated: How Black players in MLS want to make a change
-- Schedule, TV info: What you need to know about MLS is Back

Last month, more than 170 Black MLS players formed the Black Players for Change organization, whose goals are threefold: have a voice in all racial matters as it relates to MLS, increase Black representation in the MLS Players Association and the highest levels of MLS, and have an impact in Black communities.

The kneeling protest was popularized by former San Francisco 49ers quarterback Colin Kaepernick in 2016, and the raised fists mirrors the protest against racial inequality by Americans John Carlos and Tommie Smith at the 1968 Mexico Olympics and came to be associated with the Black Power movement of the 1960s and '70s as well as the Black Lives Matter movement of today.

Kaepernick's protest came during the playing of the national anthem, which will not be played during the tournament, given that the games are being staged in empty stadiums because of the coronavirus pandemic.

The Union's game against NYCFC is the second of the MLS is Back Tournament, with Orlando City defeating Inter Miami 2-1 on Wednesday.

The competition is being held inside a bio-secure "bubble" at the ESPN Wide World of Sports Complex and is the first North American professional men's league to return to action since the COVID-19 pandemic upended the sports calendar in mid-March.