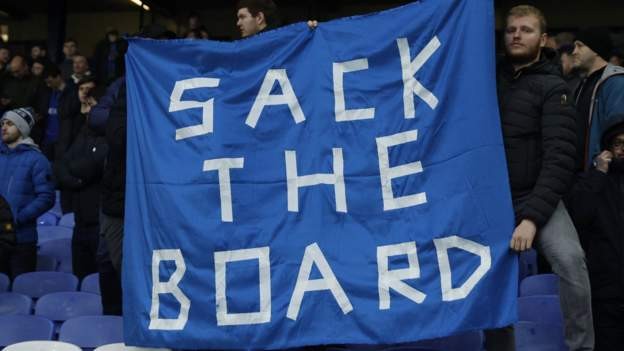 Some fans stayed behind to wave banners at Goodison Park

Everton owner Farhad Moshiri took the rare step of venturing into the public domain with a statement designed to re-affirm his commitment and calm frayed nerves among an increasingly angry fanbase.

It was not exactly a roaring success judging by the fury aimed at Everton's hierarchy - and chairman Bill Kenwright in particular - before and after the damaging 1-0 defeat by Aston Villa.

The unrest that has been the simmering backdrop to Everton's decline, with only one win in their last 14 league games, was draped all over a dismal afternoon for the home support.

The sacking of the deeply unpopular Rafael Benitez was welcomed by supporters who never accepted the former Liverpool manager but it has not proved to be any sort of shield against the questions now being asked of those running the club.

Reaction to Everton v Aston Villa, plus the rest of Saturday's Premier League actionEverton fan arrested after Villa players Digne and Cash hit by bottle'It is not nice the fans reacting like that' - Ferguson on Everton protests'Buendia is a little warrior' - Gerrard after win at Everton

Moshiri's statement assured supporters he understood their frustrations but it did not dissolve them as a plane flew over Goodison Park before kick-off trailing the banner "22 Years Of Failure Bill @Time2GoBill".

And when defeat was confirmed supporters stayed behind at both ends of the ground for some length of time brandishing banners reading "Sack The Board", "The Fans Deserve The Best", "No Communication. No Plan. No Vision", while loudly demanding chairman Kenwright's removal in colourful terms.

Moshiri's financial commitment and ambition cannot be questioned. The spending - albeit horrendously ill-judged on many occasions - and the sight of a new stadium emerging at Bramley Moore Dock is testimony to that.

It is his football judgement that has been so flawed while Kenwright, meanwhile, is seen by many fans as the boardroom symbol of almost 27 years without a trophy.

It was a day of disappointment all round for Everton, with disgraceful scenes following Emiliano Buendia's winner as Villa's players were struck by objects thrown from the crowd.

There is no doubting the mood of mutiny among Everton supporters, who clearly want change far beyond the departure of Benitez.

Everton not only need yet another manager after Benitez became Moshiri's fifth sacking, the club is also currently conducting a strategic review following the departure of director of football Marcel Brands.

Moshiri said in his statement that he was working with chairman Kenwright and the board on that review but it sounds very like a review into what went wrong by those who got it wrong in the first place, with a scattergun approach to recruitment of managers and players, plus a waste of money on signings that has left the club needing to be well aware of Financial Fair Play rules.

It smacks a little of Everton's hierarchy marking their own homework and the results of this review are eagerly awaited to see if any significant changes are actually made and whether the status quo in the boardroom is altered in any way.

Moshiri also stated he had the "utmost faith" in the board - a sentiment clearly not shared by fans judging by their reaction after the final whistle. Kenwright, in particular, was a lightning rod for those who made their feelings very clear.

Whether this has an immediate impact on events is questionable, with Kenwright seemingly determined to not only stay on but involve himself heavily.

Kenwright's now somewhat infamous revelation that "one very famous football club said to me two or three days ago 'whenever we have a problem we say 'what would the Everton board do because they always get it right''" is being made to look increasingly nonsensical by actual events.

In a very toxic atmosphere, the boost they hoped would be provided by having former Toffees striker Duncan Ferguson on the touchline was soon flattened out by a very average first 45 minutes.

This can hardly be laid at caretaker manager Ferguson's door. He has been asked to provide the bounce in a team that does not appear to have any bounce left in it.

Local pubs tweeted that Ferguson had put money behind the bar for drinks for those who fancied a bit of pre-match refreshment before what was potentially a very trying experience.

They certainly needed it and there was every chance they may have all been back at the bar for something stronger afterwards as they study Everton's current plight through the prism of another loss. Everton are 16th and only five points off the relegation places.

It is very much a case of "here we are again" for Everton's board - so where do they go next?

Moshiri says the new manager will be "aligned" to Everton's strategic review but they still carry the air of a club that is lost, unsure of its future structure and direction.

Former manager and Belgium coach Roberto Martinez appeared to be a top target but this is hardly likely to assuage or ease supporters who also conducted protests demanding his removal before Moshiri made him his first sacking in May 2016.

It almost sums up the dysfunctional nature of the club that they would go back to consider the first manager sacked in Moshiri's bold new era and after the expenditure of about £500m.

Wayne Rooney's appointment has romantic potential but he is totally untested at this level - but Everton has become a managerial appointment to fear given the volatile nature of the owner and his record of dismissals, so he may be the best option.

Maybe Moshiri might, as with Carlo Ancelotti, pull another big game out of his list of contenders but this is a club that needs more than a manager. It needs a plan and a coherent strategy.

It also needs Everton's owner and the board to get a big decision right - not something they have a track record of doing, resulting in the angry scenes we saw from supporters at the conclusion of yet another loss.