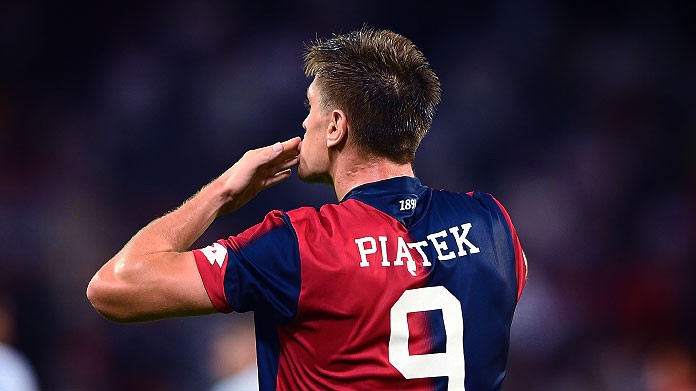 In what looks like it will become a trend at the Stadio Luigi Ferraris this season, Krzysztof Piatek was the hero for Genoa as he bagged his eighth of the season in a 1-0 win over a toothless Bologna who are still without a single goal in Serie A.

There was nothing that could separate the two Rossoblu throughout the first half and both had a chance of two to take the lead. Goran Pandev caused problems on the right with some neat footwork before handing responsibility over to the in-form Piatek but the Pole got the ball caught up between his feet and never managed to pull the trigger.

Bologna then took their turn as they turned the screw slightly. Captain Blerim Dzemaili was teed up on the edge of the box and, when he really shoot have shot himself, opted to step over the ball and let it run only for it to catch the oncoming Andrea Poli by surprise and end up tripping the Italian midfielder in what was something of a microcosmic representation of their fortunes in front of goal this season.

The Grifone had the best chance of the half and it unsurprisingly fell to exactly the man they would have wanted it to. What was surprising after Romulo’s cross found Piatek’s head though was that the No.9 didn’t find the net. Oscar Hiljemark should have made Lukasz Skorupski work harder just before the break as Genoa stepped up their game but as a loose ball fell to the Swede on the edge of the box his half-volleyed effort was tame and straight into the grateful arms of the Bologna goalkeeper. A simple counterattack then set Piatek free. He raced down the right into an empty Bologna half but the angle was narrow as he looked to shoot and Skorupski saved low.

Mattia Destro should have scored Bologna’s first goal of the season right on half-time but he headed over from inside six yards.

The second half’s beginning was similarly slow to that of the first and chances were few and far between. Christian Kouame came on for Pandev to introduce some pace and the Grifone reaped the rewards as he gave the visitors even more to think about at the back.

Piatek did get his goal. Picking the ball up from Domenico Criscito outside the box he moved forward before picking out the bottom right-hand corner and guiding the ball in with an elegant stroke of his right foot.

Even from then it was Genoa who looked the most likely to score again, with Bologna’s head’s dropping even further after the goal. Piatek has taken to Italian football with incredible ease and although it is early yet the Pole is showing that he has everything required to make it at the very top.

He missed a couple of chances but, unlike his Bologna counterpart Destro, each miss only seemed to make it more certain that a goal was only a matter of time.

His opener was his eighth strike of the season (in all competitions) already as he pulled further clear as the leading goalscorer in Europe’s top five leagues.

It is hard to work out exactly what Filippo Inzaghi wants his Rossoblu side to be or, more to the point, where he expects their goals to come from.

Their midfield isn’t weak but there is no creativity in there and with Destro appearing to be a ghost of a striker in attack, there is little for Bologna fans to pin their hopes on.

Even when chances do fall to the former Roma and AC Milan forward there is no expectation that he will find the net and that even seems true of his own mindset and the fact that he continues to get games shows how few genuine options they have in attack.

Riccardo Orsolini showed promise when he came on in the second half but Federico Santander’s introduction in place of the spirit occupying the body of Destro is an illustration of how poor their depth is.