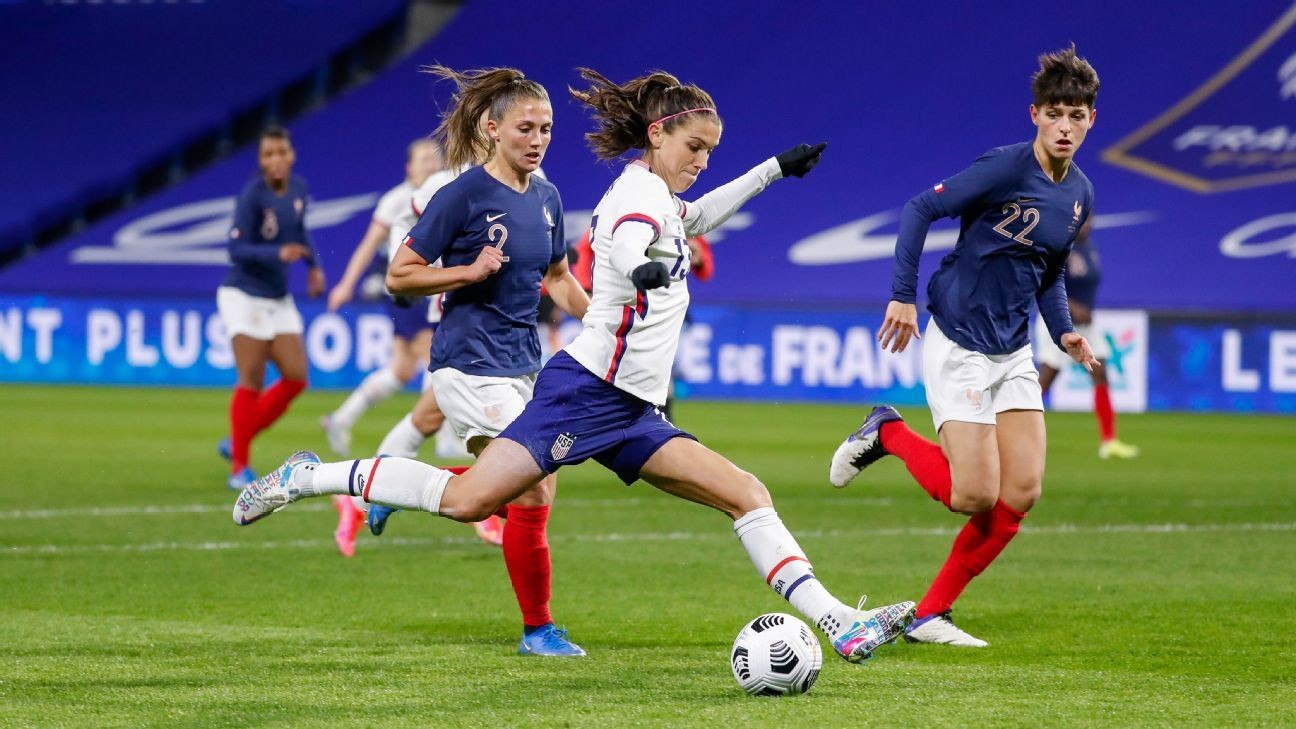 United States women's national team manager Vlatko Andonovski said he feels that forward Alex Morgan is regaining her sharpness after watching her score one goal and win a penalty in the Americans' 2-0 win over France.

The match was billed as a massive test for the top-ranked U.S. side, given that France was ranked third in the latest FIFA rankings and was coming off a 3-1 win over six-ranked England. But the U.S. took control early, as Morgan was fouled in the box by French defender Aissatou Tounkara in the fourth minute, with Megan Rapinoe putting home the ensuing penalty.

Morgan then doubled the U.S. advantage in the 19th minute, taking a feed from Christen Press and firing past France keeper Pauline Peyraud-Magnin.

From there the U.S. was firmly in control and kept France at bay for the remainder of the match. And it wasn't just Morgan's goals that impressed Andonovski.

"Today as a starter, I think that she executed her role very well," he said about Morgan. "Besides the direct impact with the [penalty] and a goal, she was also very involved in our build-up. She was able to hold the ball, bring the midfielders into the game, and release pressure for us."

Morgan was sidelined earlier this year with a bout of COVID-19, and gave birth to her daughter Charlie last year. But Andonovski sensed that Morgan had turned the corner in terms of regaining sharpness and fitness over the last month.

"Obviously we don't just analyze every game but every practice, and in the last couple of practices, it's almost like she bumped it [up] a notch, was just a little more focused, a little more concentrated," he said. "And we, as a staff, we were talking about how she got the killer instinct back. With just a little space and time she was scoring goals which was very encouraging for us, and she showed it in the game tonight."

Morgan returned for the U.S. during the SheBelieves Cup in February, but the key was getting a full preseason in with club side Orlando Pride.

"I was really looking forward to this camp in general because preseason with Orlando went really well," she said. "I felt like I was able to gain that couple percentage [points] that I was just lacking as I was coming back from pregnancy, so I felt like really good going into this camp. I was really happy to get minutes and both games, and I felt like, tonight we had a good showing. And it's always nice to get on the scoresheet against France, it makes it that much more special."

Andonovski, who ran his record as U.S. women's manager to 17-0-1, was also pleased with the entire team performance, in which the U.S. looked sharper than Sunday's 1-1 draw with Sweden.

"This team is the best when they're getting tested, and I thought that this is a great test for us to see how quick we can adapt from the game against Sweden to this game," he said.

He added, "One of those things was I said that we were not patient enough and we were not clean enough in the last game, which in this game, we did a pretty good job."