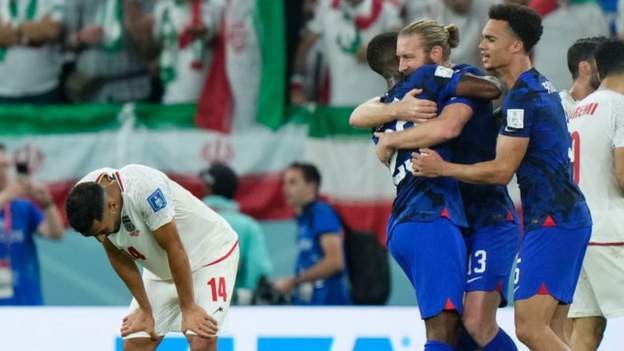 The United States are in the World Cup last 16 - but will Christian Pulisic be with them when they take on the Netherlands on Saturday?

The Chelsea forward's first-half winner against Iran ensured the US qualified from Group B. However, he finished the game in hospital.

As he turned in Sergino Dest's header, Pulisic collided with goalkeeper Alireza Beiranvand, suffering a blow to his abdomen, and was taken off at half-time.

USA manager Gregg Berhalter later confirmed the forward - named player of the match, even after his early exit - was taken to hospital "as a precaution" as he felt dizziness following the injury.

Christian Pulisic scored but came off injured at half-time against Iran, as the USA won 1-0

With the Netherlands up next for the USA in the last 16, they will hope to have Pulisic is back in time - not least because he has had a hand in both of their goals at the tournament so far.

"We Facetimed him afterwards from the locker room and we got to see him and he's in good spirits," said Berhalter.

"I'm guessing he had his phone with him and had updates [on the game]."

'We deserve to be in this position'The USA have not lost a game at this World Cup, having beaten Iran and Wales and drawn with England

Berhalter needed a win from his side to make the last 16, against opponents who would have gone through with a draw.

He was given a "determined" and "focused" performance as the USA dug in to retain their slender lead.

"It was a difficult proposition knowing that Iran could potentially just need a tie to go through. That made the game a little complicated," said Berhalter.

"But I saw a tremendous amount of focus. The end of the game is what I'm most proud of - it was extreme determination not to buckle."

Berhalter would not be drawn on questions about how far the US could go, having reached the knockout stages for a third time in four World Cups.

"I'm sure there's a lot of people watching. The US reporters will talk to you about defining this group and I think it's starting to take shape," he added.

"You see how unified [the players] are and how much energy they put into it and along the way is some pretty good soccer.

"It's a great opportunity but it's not something we are going into thinking it's an honour. We deserve to be in the position we're in and we want to keep going.

"We don't want to be at home next Wednesday."

It has been a turbulent tournament for Iran as controversy has dominated proceedings off the pitch amid anti-government protests back home.

Head coach Carlos Queiroz, who has tried to bat away questions about politics in order to reduce the pressure on his players, was left to reflect on a group-stage exit after two defeats in three matches.

"Football always punishes the team that doesn't score. The team that scored in the first half was deserved," said Queiroz.

"We created opportunities we didn't score and are punished with the result. A draw was the right result but in football fairness doesn't exist.

"I am very proud and honoured for having the chance of being a coach for the Iran squad and players."

In the build-up to their final match with the USA, there were reportsexternal-link that the families of Iran's squad were threatened with imprisonment and torture if the players failed to "behave".

"We have heard several stories about threats that players have received but that said, what I can state is that thanks to their work, players little by little have started smiling again," said Queiroz.

"They understood who they are playing for and understood their mission. I'm very glad they were able to give a response on the field of play and bring prestige to the jersey of their country."