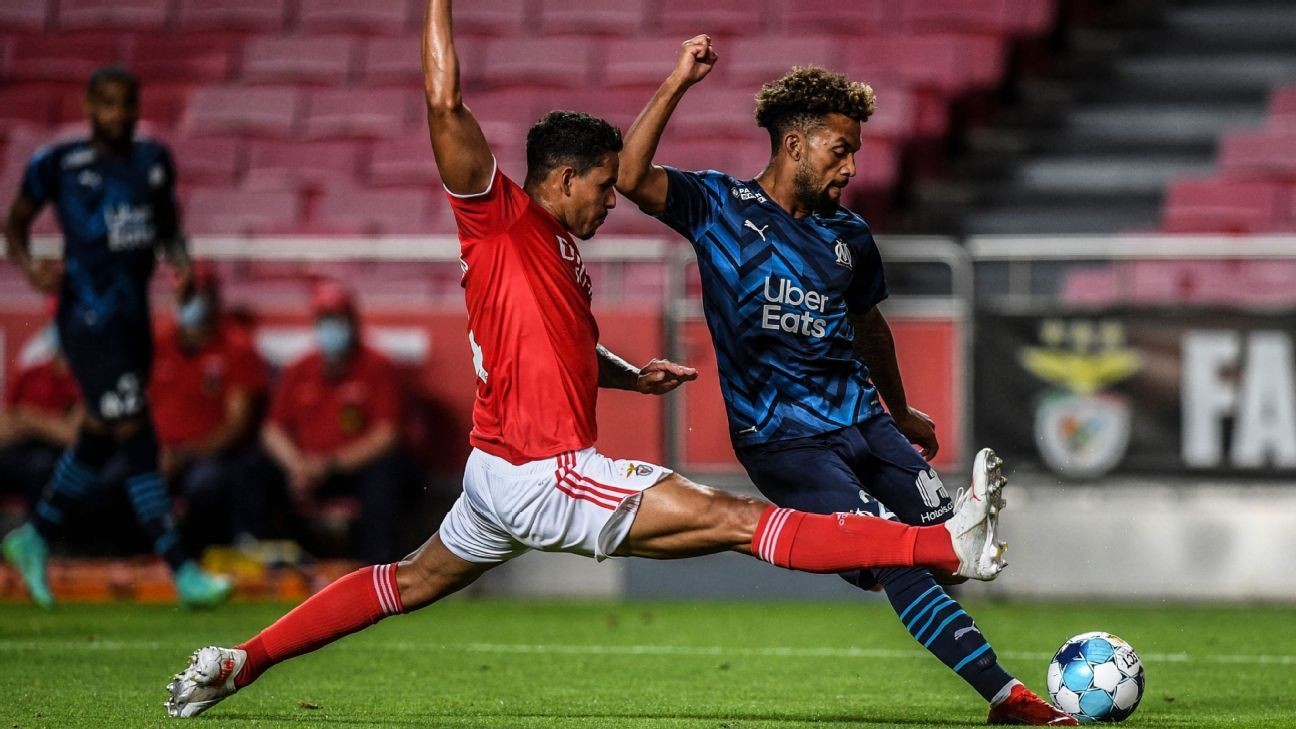 De La Fuente has made a positive and immediate impact at Marseille since leaving Barcelona this summer. PATRICIA DE MELO MOREIRA/AFP via Getty Images

Every professional soccer player is chasing the dream of becoming the best, and for much of his career, Konrad De La Fuente was the rare performer who seemed poised to live them out at the very highest level. He joined La Masia, the famed academy of FC Barcelona, when he was just 12, and gradually kept rising through the ranks towards the hope of a place in the first-team squad.

Until he didn't. Granted, De La Fuente made it further than most, garnering three first-team appearances -- two in the UEFA Champions League -- as well as extensive time with Barcelona B in Spain's second tier. But there was also the fact that he made the bench for the first team 18 times last season, with nary a minute in league play. Despite rubbing elbows with Lionel Messi and Gerard Pique, his ceiling, at least in that moment, had been reached.

So De La Fuente pursued an alternate path this summer, securing a transfer to Ligue 1 side Olympique Marseille, and rather than feeling like he's given up on his Barca dream, it's more a dream deferred. At just 20 years old, there's still time.

"I'm an ambitious person, so for me, it wasn't that hard to leave [Barcelona]," he told ESPN via telephone while on international duty with the U.S. in early September. "My goal is to end up playing for Barcelona one day, and I know that the best way for that to happen was to leave, because I need to get those first division minutes.

"I had some good offers -- I chose to go to Marseille. The best thing I could have done for my development was to start getting professional minutes early, to grow as a player and hopefully one day get back to Barcelona."

The summer of 2021 wasn't the first time De La Fuente felt the itch to move on. At the start of 2020, there were reports of Bundesliga interest, but the powers that be in Barcelona convinced the Miami native to stay. Later that year, newly arrived manager Ronald Koeman counted himself as a fan. But the 2020-21 campaign proved to be difficult, and not just because of the lack of LaLiga minutes. De La Fuente bounced between the first and second team; if he didn't play for the first team on Saturday, he'd arrive home with Lionel Messi & Co. at 4 a.m., only to then meet up with Barca B and play for them on the Sunday.

Feeling that he couldn't serve two teams well, De La Fuente asked that he be allowed to focus his playing time with Barcelona B, and the coaching staff agreed.

"My routine changed a bit," he said. "If they were sure I had no chance of playing with the first team on the weekend, I would just stay with Barca B on that Saturday and train with Barca B. Then on Sunday, I just played. That way, I got to play consecutive games without skipping any, and that [continuity] really helped."

Indeed, De La Fuente finished the season with six goals in 22 league appearances with the Barca B -- not that Marseille needed much convincing when the summer transfer window opened.

De La Fuente, left, was getting limited opportunities with Barcelona's first team to the point that he asked to remain with the B-side so he could play consistently. Alex Caparros/Getty Images

De La Fuente had caught the eye of Marseille president Pablo Longoria back when the executive was the sporting director at Valencia, and the player's availability rekindled that interest. From there, a phone call between De La Fuente and Marseille manager Jorge Sampaoli convinced both sides they would benefit from the move. Sampaoli was won over by De La Fuente's attitude and felt he had the work ethic required to succeed, while the player was confident that the former Sevilla and Chile manager could move his career forward. Given Barcelona's struggles with financial difficulties, the price was right, too -- a relative bargain at $3.5 million.

"It's not a failure. It's the reality of being in one of those big clubs," said current Houston Dynamo manager Tab Ramos, who coached De La Fuente with the U.S. U-20 national team. "That's how it works. You normally are going to end up at another big club. If you're not good enough, you obviously don't make it. He's made it to a big club now, and I think that's incredibly positive."

In some ways, De La Fuente's on-field and off-field personalities seem at odds; he's soft-spoken away from the game, but boasts the requisite competitiveness and confidence once the whistle blows. Ramos recalls a player whose impression was more of a slow burn than a bolt of lightning, a performer who won him over a little bit at a time.

These days, De La Fuente says he's refined his approach. He's all about duels. And winning them.

"Every player I think has their own small 'game within the game,'" he said. "Mine is just dealing with the guy that's marking me, just going at him all the time, beating him 1-on-1, creating chances and scoring."

It's this area that Sampaoli is trying to accentuate even more. De La Fuente recalls that in moments when he feels he needs to slow the play down -- something Barcelona tends to do at times, for strategic purposes -- Sampaoli implores him to ignore those instincts and keep attacking.

"He wants me to push the ball forward any time I get the chance," said De La Fuente. "Stay open when I get the ball, push the other team's defense back, go 1-on-1. Create scoring chances as much as I can. If I'm in training and I try to play simple, he's like, 'no, every time I need you to continue to go,' so that it comes natural in the games. I'm not stopping."

Though he's only made three appearances so far for the U.S. men's national team, De La Fuente is already making an impact and should continue to feature heavily through World Cup qualifying. John Dorton/ISI Photos/Getty Images

Two assists in three league games point to a rapid acclimatization process, though there are still things to learn in Sampaoli's idiosyncratic 3-3-1-3 formation. It has helped that defender Alvaro Gonzalez, who came from LaLiga himself in 2020, has taken De La Fuente under his wing, and he's bonded with Arsenal's on-loan midfielder Matteo Guendouzi as well.

"So far it's turned out really well for me," De La Fuente said of the move. "I'm really happy."

His club isn't the only venue where there are adjustments to be made; the same is true of De La Fuente at the international level. He showed flashes of his ability in the U.S.'s 0-0 draw with El Salvador, especially early in the second half. But there were also times when he drifted out of the game, and he admitted there were some aspects of the chaos of CONCACAF that have taken some getting used to.

"The speed of the game I think is slower, but from a competitive standpoint, I think it's different," De La Fuente said about World Cup qualifiers in CONCACAF. "Here, it's like a fight every game. In Europe, it's more controlled. Not to minimize our opponents here, but in Europe there's more technical quality and in the opposing team as well. In CONCACAF, opposing teams aren't as technically good as European teams, so they make up for it in other ways. Against El Salvador, every 50-50, guys are coming in a little bit with their cleats up, two-footed tackles all the time. All the [loose] balls, they'll be going in with their elbows up."

He added, "All those little details make the difference."

Now De La Fuente is back in Marseille, where additional experience in Ligue 1 as well as the Europa League -- they visit Lokomotiv Moscow on Thursday -- beckons. So do his dreams.

Additional reporting and information from Julien Laurens and Sam Marsden