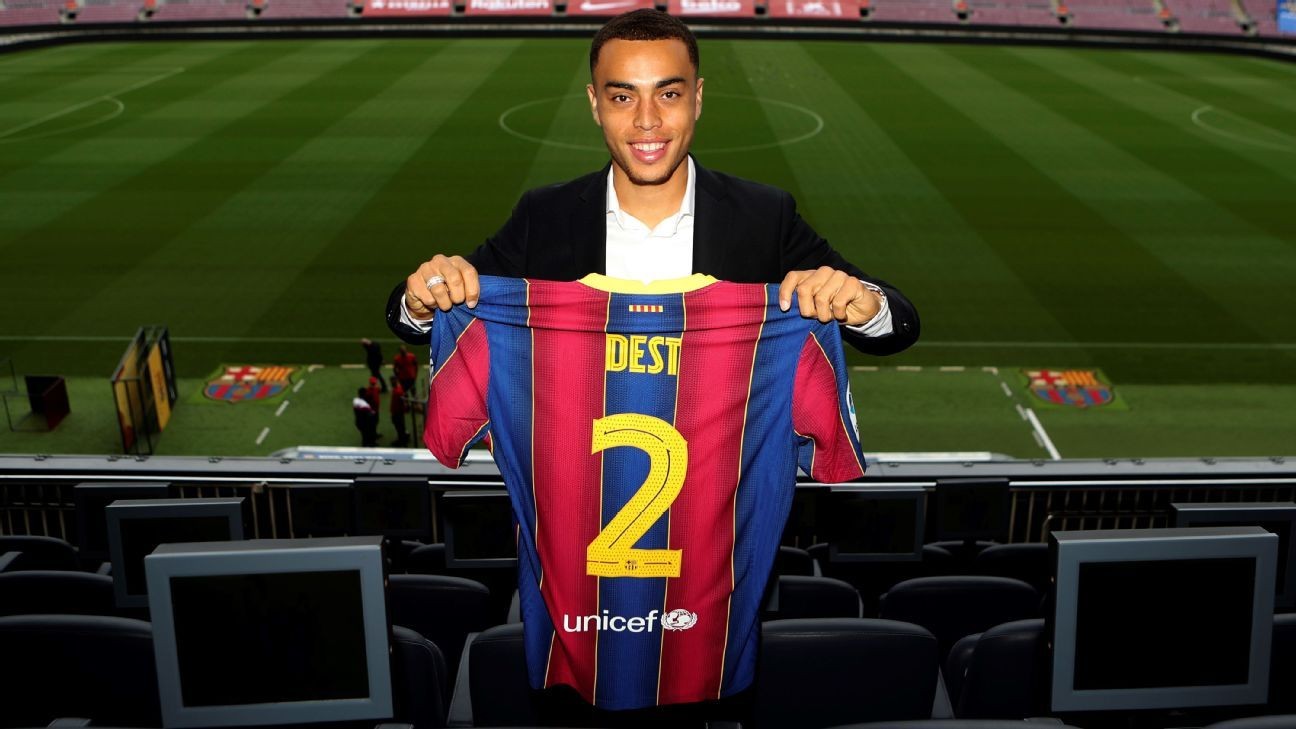 There's been no let-up for United States international Sergino Dest since he signed for Barcelona one month ago and his baptism of fire continues with Wednesday's Champions League game against Italian champions Juventus.

Dest, who turns 20 next week, made his Barca debut as a substitute against Sevilla just three days after signing at the start of October and then started matches against Getafe and Ferencvaros. At the weekend, he became the first American to feature in the Clasico, playing 90 minutes at right-back as Barca were beaten 3-1 by Real Madrid at Camp Nou.

There is no time to dwell on that defeat, though, with Ronald Koeman's side in action this week in Turin as their attention switches back to European football.

"This is the reason [I signed]," Dest told ESPN on Monday. "You want to play every game against the best opponents and see where you're at right now with your development. I think there's enough room for me to improve, but I am on a good [path] and I like these games."

Dest is one of an emerging group of young USMNT players making their way at Europe's biggest clubs. Wednesday's game sees him face another in Weston McKennie, who joined Juve this summer from Schalke 044.

"I didn't speak to him about the game yet but when I signed for Barcelona, he told me: 'I will see you in the Champions League,'" Dest laughed. "It's nice to play against him. We're good friends in the national team so we're looking forward to it."

If there has been a downside to the last month for Dest, it's been that games continue to be played behind closed doors due to the coronavirus pandemic.

"It's really strange," he said about playing the Clasico in an empty Camp Nou. "You feel it, but you don't really feel it, the pressure. And I think the pressure is something that makes football, that makes the sport, the fans, everything around it.

"It's not boring because you want to play, it's always nice, it's just way better with the fans and the support from outside. [The Barca players] told me it's so much pressure [with fans in the Clasico] but I will have to see it with my own eyes."

Ale Moreno praises the performance of Sergino Dest in his first-ever El Clasico despite Barcelona's 3-1 defeat.

Dest was one of the few players to come out of the Madrid loss with any credit. Sources at the club comment on a "maturity that belies his years" and he feels the confidence placed in him by Koeman has helped him settle quickly.

"You have to find your place in the team and play, that's why at first I want to play simple, get my spot, get my chemistry with the team and then slowly grow more and more into the team," he said.

"Koeman has given me confidence and now it's up to me. I have to play good matches, develop myself. He gave me the chances but it's up to me if I make them work or not.

"I just try to play my game. I am a defender, so right now I am trying to defend a lot. If possible, I go forward. Before, at Ajax, maybe I went a little too much forward and forgot my defence, but now I am not forgetting my defence. I am looking for my moments to go forward.

"But it's an amazing first month for me, my dream came true, I play for Barcelona now. Sometimes when I look at [my teammates] on the pitch I'm like 'Wow a couple of years ago I watched you guys on TV' and now I play with the best player in the world [Lionel Messi]. That's amazing.

"[I know] we lost the Clasico but for me, it's just starting. Hopefully I can reach wonderful things with this beautiful club and develop myself as best as I can."