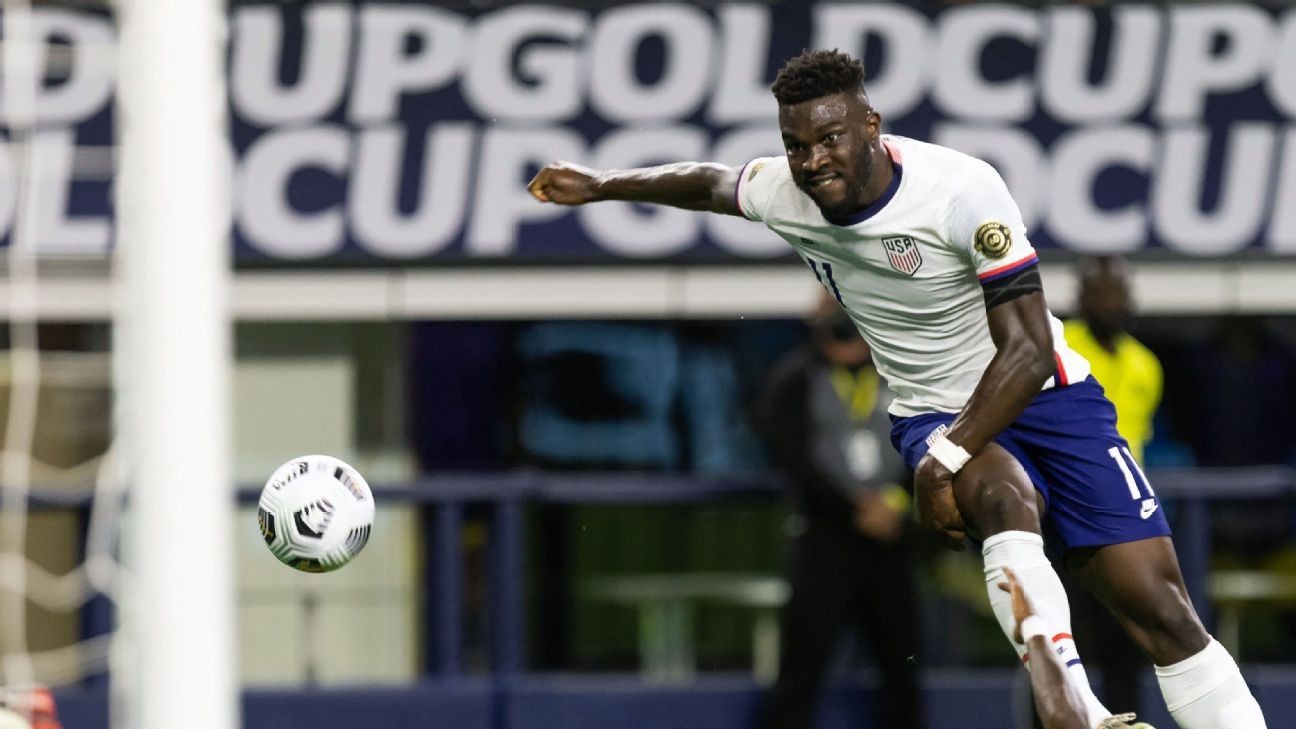 It has been four months since Orlando City striker Daryl Dike was named on a US Men's National Team roster, but the Nigerian-American told ESPN he is determined to be in the World Cup qualifiers squad come January.

Since the helping the US to Gold Cup victory, often hampered by injury, the forward has been left out of all subsequent squads as the USMNT negotiated World Cup qualifiers in October and November.

The latest squad for the upcoming Dec. 18 friendly against Bosnia and Herzegovina, composed mainly of MLS-based players, was named last week, sans Dike again despite his form in the 2021 season.

The intention, according to coach Gregg Berhalter, is to keep these players fit as they go into the offseason, ahead of the Qatar qualifiers in January.

"The most important thing at this time for Daryl is to get rest and recovery that he can focus on coming back in January and building himself up again."

Dike, who had been enjoying a purple patch before the season ended for Orlando in late November, expressed his disappointment but said was ready for the fight to win his spot back before January.

He told ESPN: "Of course, I want to be in every single camp and every single game, but at the same time, having coming off recent knocks with the shoulder, with the tendinitis, with other things, I think maybe it could have been for the better that I did not go [to those camps].

USMNT coach Gregg Berhalter explains his thought process as he selected a 26-player roster for a friendly against Bosnia and Herzegovina.

That fuel has is what has propelled him this far, as the competition for the USMNT strikers' roles heats up in the build-up to next year's World Cup.

Dike added: "Looking at the striker positions for the national team, there are tons and tons of good players. Gyasi [Zardes] is a great player. There is Josh [Sargent], there's Jordan [Morris], Matthew [Hoppe], you know, there's tons and tons of great quality there.

"Each one of us offers a different kind of attribute to the team and different skill sets. And so it's kind of finding which one is the best for a situation. For me, I just know that in the end, I want to be part of that. I want to be in the starting team.

"I realize that I have a lot of work to do. And I realize that there's still a lot for me to learn but I'm going to continue to improve and I'll make the spot but just got to keep working."

While Christian Pulisic, Sargent and Zardes are formidable competition, in just the second year of his professional career, the former University of Virginia standout has made a very compelling case for himself.

After a successful first season with Orlando, where he tallied eight goals and three assists in 17 MLS appearances, Dike went off on loan to Barnsley in the English Championship.

His nine goals from 22 appearances were hugely instrumental in lifting them from 12th -- where they were when he arrived -- to the Playoffs. Although that adventure proved ultimately unsuccessful, the youngster had done enough to put himself on the radar and made his national team debut in January.

Unable to force his way into the main CONCACAF Nations League squad in May, Berhalter liked enough of what he saw of the striker to take him along anyway, and he was on the field with the rest of the team to celebrate that historic victory over rivals Mexico in the Final.

A few days later, he opened his international account in a post-tournament friendly against Costa Rica, then followed that up with a brace for Orlando City against San Jose Earthquakes to earn a spot as striker at the CONCACAF Gold Cup.

He did not disappoint, getting his tournament off to a red-hot start by scoring twice in a 6-1 win over Martinique, in a head-turning performance that saw questions thrown at Berhalter about Dike's standing in the overall squad.

"I don't think it's appropriate now to make a judgment," a coy Berhalter said at the time.

"I think he performed well. I think he scored some good goals. He showed why we really rate him and we think he's an important part of our team, but we're not jumping to any conclusions on anyone based on today."

Striker Daryl Dike has three goals in eight appearances for the USA, and is aiming for a place on the roster for the January World Cup qualifiers. ANDY JACOBSOHN/AFP via Getty Images

Unfortunately, Dike had little chance to show more of his talent, suffering a shoulder injury in the final group game against Canada that not only limited his appearance in the latter stages of the Gold Cup, but also kept him out for five MLS games.

His return to league play, however, was nothing short of sizzling. Given a month off by Orlando City to recover, Dike picked up right where he left off. He notched eight goals and one assist from 14 appearances, including seven in his last nine and four from the last four games.

It was all part of laying down his marker for that international spot, he said: "Every single player goes into every single match knowing that it's another opportunity to prove themselves.

That drive to excel, to be better every day, comes from having watched his elder siblings plough the path. Born to parents of Nigerian origin, Dike finds himself in unique circumstances.

Brother Bright and sister Courtney both represented Nigeria at international level, and Daryl says he was inspired by them, especially Bright, who played for Portland Timbers and Toronto FC, and earned two caps for the Super Eagles.

Dike said of his brother: "He's a big inspiration. You see the things he's done, you see the goals he scored, the teams he's played on, the levels he played.

"It pushes me because I look at him, I look at my sister, and all these people around me, it makes me think that I want to be able to do all the things that they did, or even pass them and do more.

"Having those people in front of you, seeing that it's possible, seeing that, you just have to work, keep yourself grounded, and all these things, and you can achieve those levels, that inspires me."

Bright Dike played twice for the Nigeria national team, though brother Daryl says he himself was never approached by the Super Eagles to play for them. GLYN KIRK/AFP via Getty Images

He could have followed the same path, Daryl says, if Nigeria had called. He could well have been suiting up in green and white rather than the Stars and Stripes.

The Lions striker added: "I never had the opportunity of playing for Nigeria. For my brother, Nigeria had reached out to him and had given him the opportunity to go and play with the national team, and then of course, Courtney the same when she played in the Olympics, and with under 20s, playing the World Cup.

"You always grew up wanting to represent a national team, you always dream about playing in these Gold Cups, the African Cup of Nations, the World Cups, and playing with great players.

"And for me, getting the opportunity to come play with the United States was a big moment for me. Because it was another big step in my career to being able to achieve the goals that I've been dreaming of since I was a little kid and I am immensely proud of that."

His family share that pride, and it was special to him to have them see him lift the Gold Cup trophy: "Before the semis and the quarterfinals, my family had come [to a game] and it was a huge moment for me.

"My family had actually never been able to come and see me play professionally because of COVID, because of travelling, because of distance when I was in England.

"So being able to finally play in front of them in person, and after the final seeing my brother in the stands smiling, how happy he was... it's a great feeling for me, because it makes me feel like I'm making them proud."

And now he wants to make them even prouder by fighting his way into the World Cup squad: "Whether I am in the squad or not, I will always support the US because it is my team.

"But I know I will have to keep working, keep improving, to get back in there and go to the World Cup."