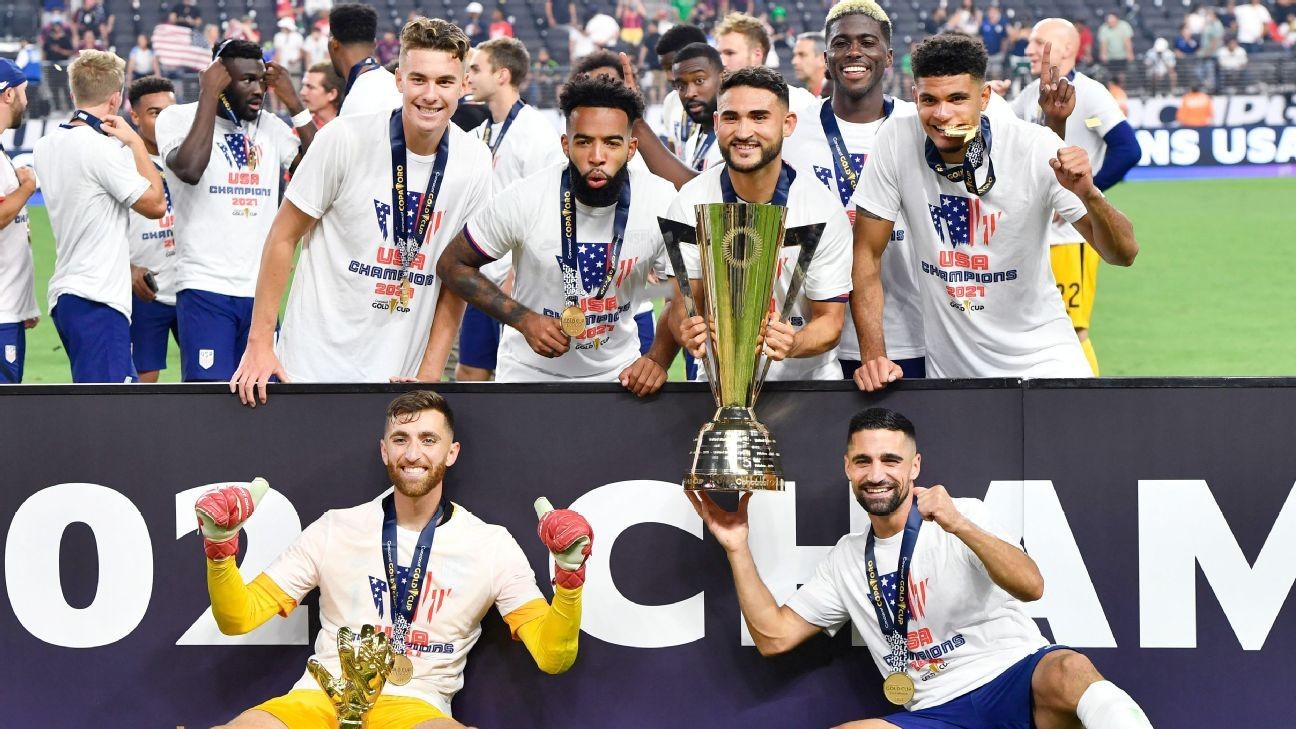 LAS VEGAS -- Prior to the start of the Gold Cup, United States manager Gregg Berhalter made clear that his team's goal was to win the tournament. It was the kind of statement that was easy to dismiss, a bit of coach-speak for a youthful group of players in which winning the whole thing seemed beyond their collective reach.

Berhalter proved himself a prophet, leading his team to a pulsating and deserved 1-0 extra time win over rivals Mexico in Sunday's final, with defender Miles Robinson nodding home the game-winner in the 117th minute.

When the final whistle blew, accompanied by a roar of those U.S. fans in attendance -- and yes, there were a few -- it capped off a near-perfect summer of soccer for the USMNT. Combined with the triumph in the CONCACAF Nations League, the U.S. won two trophies at Mexico's expense, tilting what was becoming a one-sided rivalry into one contested on more level terms. And it proved to be the perfect birthday present for Berhalter.

"When I look back at it, I'm most proud for the team, for the guys," he said. "We were together for a month, and we just saw them growing, we saw the team growing, saw individuals growing and improving. We saw the team chemistry growing.

"Before the final today, there was a feeling inside of me that I just wanted it so bad for them, that they can taste this, and then they can win a trophy together. So really proud of the group really proud of their resiliency. And you know, when you look at the game today, we did not stop. It was relentless from us. And that was a mark of a good team."

For the U.S., it's a victory whose value will resonate beyond simply having its name etched onto the trophy. Berhalter has succeeded in blooding an entirely new group of players. With World Cup qualifying starting in September -- replete with triple fixture windows that will test depth -- the timing couldn't be any better. This group hasn't just gotten a taste of international soccer, it has learned and adapted on the fly and won games in the process against a wide variety of opponents, be it the physical aspects of Jamaica or the possession-based attacks of Qatar and Mexico.

Now many of these players have proven that they can be counted on in pressure-packed environments. Sunday's final at Allegiant Stadium certainly qualified as such. By an admittedly rough estimate, 90 percent of the crowd of 61,514 was vociferously in the Mexico camp. Yes, World Cup qualifying will feature extreme weather and difficult field conditions, but the steps taken in this tournament and in Sunday's final were vital for excelling under those circumstances, and bode well for what lies ahead.

Robinson is a prime example of how a player benefited from this competition. The Atlanta United defender played every minute of the tournament, and one struggles to come up with one instance where he made a mistake. He played with the required physicality and was sharp on the ball as well. And the goal, from Kellyn Acosta's inch-perfect delivery, capped off a fantastic tournament for him.

"I think we really put our head down and grinded out results throughout the tournament," said Robinson. "It's just a matter of this group being so confident with the ball, without the ball and how we really stuck together like a family and I'm really excited for this group."

Will it be enough for him to be in the United States' starting lineup? A player like John Brooks won't be easy to displace. But at minimum there is a confidence that if a player like Brooks isn't available -- he has suffered some serious injuries during his career -- the drop-off will be miniscule.

Acosta and James Sands excelled as well. Acosta has finally answered the question of who can deputize for Tyler Adams when the holding midfielder is unavailable. On Sunday he was everywhere, showing off given his range, tackling and passing. Sands was by no means perfect in Sunday's final, struggling at times with the physicality of Mexico forward Rogelio Funes Mori. But one could sense his adaptation as the game went on, coping better with duels.

While ultimately it's down to the players to perform on the day, Berhalter deserves credit for engaging every player on the roster and using them at the right time. On Sunday it was players like Eryk Williamson and George Bello, who hadn't played much in the tournament, and yet were called on to start against Mexico. Williamson was quiet at times, but showed a willingness to drive at the Mexico defense in a way no one else would. Bello was a rock on the left side of the U.S. defense. Cristian Roldan excelled in a super-sub role, providing valuable experience to a young group.

"For us, it's about relentless pressing, it's moving high, and it's next man up because we need fresh guys, we need fit guys to be able to play the way we want to play," Berhalter said.

In many ways Sunday's match was a throwback to past U.S. performances against El Tri. Mexico bossed possession, and created some clear opportunities, only for a combination of wayward finishing and stellar goalkeeping -- in this case from Matt Turner, who also showed well in the tournament -- to keep El Tri off the scoreboard.

Meanwhile at the other end, the U.S. looked to be opportunistic in attack, and managed to create a couple of clear looks at goal. In the 27th minute, the U.S. forced a turnover that led to Sebastian Lletget putting Paul Arriola in the clear, but he could only hit the post with his attempt.

And as has so often been the case, the longer the game went on, the more the U.S. team's belief that it could prevail increased. The pressure to win was always greatest on Mexico given that it had much more of its first-choice lineup available, and that pressure began to tell on El Tri.

"So from half-time, we felt like we were in a really good position," said Turner. "We felt like we were where we wanted to be. I think we might have given up a few too many chances, more than we would like. But fast-forward, it was 0-0, and we were asking questions."

Certainly there were heart-stopping moments from both teams. Oberlin Pineda and Funes Mori missed some glorious chances but so did the U.S., including a later attempt by Arriola from close range that Mexico goalkeeper Alfredo Talavera thwarted with a spectacular save.

In the end, it was the U.S. that finally converted, and now a few days of celebrations lie ahead. But the game waits for no one and no team. By the time the post-game press conference came, Berhalter's thoughts were already looking ahead to September.

"Through the course of these last couple years, we've been evaluating people non-stop," said Berhalter. "That's what it was about; evaluating to get to these points where qualifying is everything right now. That's we're focused on that right now, actually. That's our focus. This tournament is in the past. And now we shift towards qualifying. We know it's going to be grueling. But we think the player pool has matured, and it's been battle tested."

And it believes that even better days lie ahead.