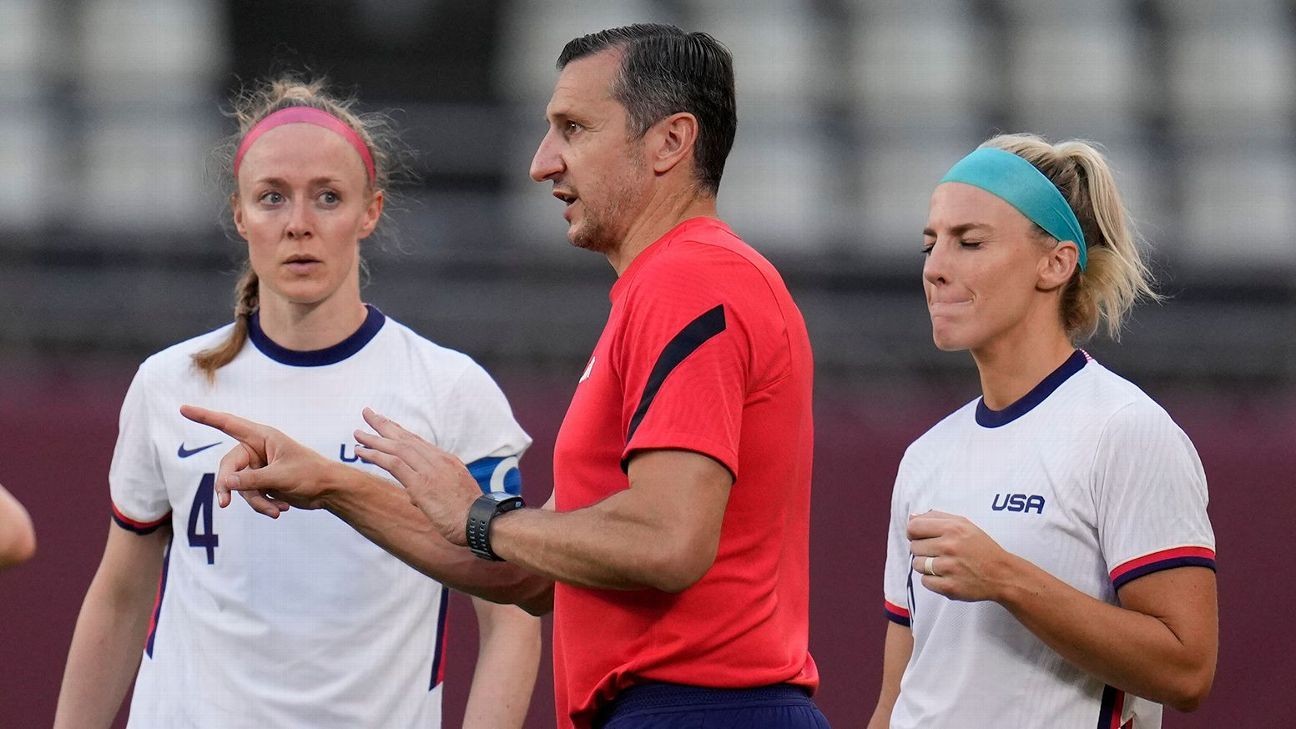 With one minute left in the final match of Group G in the Olympic women's football tournament between the United States women's national team and Australia, the Tokyo Games broadcast feed cut to Alex Morgan on the bench. She was staring out on to the field and she just shook her head, "no." That small moment summed up how the USWNT finished group play of the Olympics, limping into the quarterfinal round after Tuesday's 0-0 draw at Kashima Soccer Stadium.

In the end, it was job done for the Americans. After a shaky start where Sweden demolished them 3-0, obvious doubts had started to creep in; not just that the U.S. might not reach their sixth gold-medal match, but that they might even be vulnerable in getting out of the group. They rebounded nicely with a 6-1 win against New Zealand, but Tuesday's draw to Australia was a step backward, even if it was all they needed to advance.

"We came with the mindset that the first goal was to win the game and the second goal was to put in a good, professional performance and not get scored on," coach Vlatko Andonovski said. "We didn't accomplish the first one, but we did the second one, which was very important because it ultimately put us in the same place."

A listless, scoreless outing is not an inspiring way for the USWNT to advance to the knockout stage of the Olympics, but there are no style points in soccer -- they advanced, and that's the important thing. Now, here is a look at the other takeaways:

United States coach Vlatko Andonovski's conservative approach has got the team to the quarterfinals, but they are not playing like contenders for gold yet. AP Photo/Fernando VergaraUSWNT caps off worst Olympic group stage in 25 years

With Tuesday's result, this is USWNT's first time not winning their group in an Olympics since women's soccer was added to the Games back in 1996. Even when the Americans lost their opening match of the 2008 Olympics, they still managed to top their group before winning gold. In World Cup play, the USWNT has only ever failed to win its group once in 2011.

Now, the Americans must face a more difficult path where they will either face Netherlands, the team they faced at the 2019 World Cup, or Brazil, one of the perennial favorites in big competitions. It's not the path the players or coach Andonovski envisioned, surely.

This is uncommon territory for the USWNT, and no one will feel the pressure more than Andonovski, who has consistently worn a tense look on his face in news conferences for the first time in the job. It's his first major tournament as an international coach, and it has showed. He didn't want the USWNT to play the way it normally does against Australia, asking for a more conservative approach -- it was either a shrewd tactical decision or a lack of confidence in his team to play the role of aggressor. The knockout phase will be telling.

After all, the players have been here before -- several were on the team that lost in the group stage of the 2011 World Cup to Sweden and finished second in the group. That team, the only one not to top a Women's World Cup group, reached the World Cup final, falling only to a penalty shootout. They will know they can overcome a slow start, but will Andonovski share that belief and let them play to their strengths?

The U.S. should have scored in the eighth minute. Morgan broke free after winning the ball in the midfield and found herself one-on-one with Australian goalkeeper Teagan Micah. But when she got to shooting position, she was all alone, with no one running alongside her in that counterattack. Her shot went straight to Micah. That was a frequent theme throughout the evening in Kashima: the Americans looked to be holding back instead of flying forward and playing ultra-aggressively, as they so often do.

That may have been because a tie was all the U.S. needed to clinch a spot in the quarterfinals. But the bigger reason was almost certainly the presence of Sam Kerr, the striker who had scored three of Australia's four goals in their first two games, and the player who has won a Golden Boot award in leagues on three different continents. Leaving her an opening to strike on a counterattack is not advisable. But for the danger of Kerr in transition, the USWNT can be just as lethal, particularly against an Australian team with defensive vulnerability. Yet, the U.S. was often slow to push forward.

"The one thing that surprised me a little bit was that they were passive in their pressing," said Australia coach Tony Gustavsson, who was the USWNT's assistant coach when they won both the 2015 and 2019 World Cups. "I used to see them very, very aggressive. I think it was two teams that respected the space behind."

The few times the Americans did have the numbers advantage going forward, they looked rushed and unprepared to use interplay to beat the Australian defense. Take Christen Press' breakaway in the 55th minute -- she never even looked for the trailing runners behind her, going straight at goal and shooting right to Micah.

In the postmatch news conference, when Andonovski was asked about whether it's difficult to ask the USWNT to "dial it back" and play more conservatively, Morgan smirked, as if to admit it's not how the USWNT usually likes to play. But Andonovski said he was pleased: "It's not difficult -- I would say it was a good opportunity for me to see whether the team is ready to take on the information they were given and execute it."

A 0-0 draw, however, was almost certainly not the desired result, and the U.S. players can't be pleased with it. Ever since the USWNT opened the Olympics with a loss to Sweden -- whether it shook their confidence or revealed something that was already there -- the Americans just haven't looked the same since.

Alex Morgan though she had headed the United States into the lead but her goal was disallowed. Atsushi Tomura/Getty ImagesVAR strikes: Olympics edition

For all the USWNT's struggles on Tuesday, it would be unfair to not acknowledge that the game should have changed on the half-hour mark. On a corner kick, Alex Morgan rose in the middle of the box, beating a flat-footed Australian defense, and nodded the ball into the back of the net.

The referee called it offside and VAR confirmed the decision, despite the fact that replays showed clearly that Morgan's shoulder was even with last defender Emily Van Egmond (and Morgan's feet were well behind Van Egmond's too). If Morgan was indeed offside, it would take a magnifying glass to see it, and the referees seem more concerned with the fact that Morgan's body position was leaning forward more, even though she was even with the last defender.

Regardless, the Americans should have taken confidence from that moment, and they had a further hour to try to score again, but they never did.

The women's tournament should be expanded

As the second half dragged on without a goal and players felt heavy legs, both sides seemed to come to grips with the idea that a 0-0 draw wouldn't be so bad, so maybe they should stop running themselves ragging trying to score.

For the Americans, a draw was enough to guarantee them a spot in the quarterfinal. For the Matildas, a draw still left them with a chance because some third-place teams with the lowest goal differential will advance, and a scoreless draw would probably be just fine.