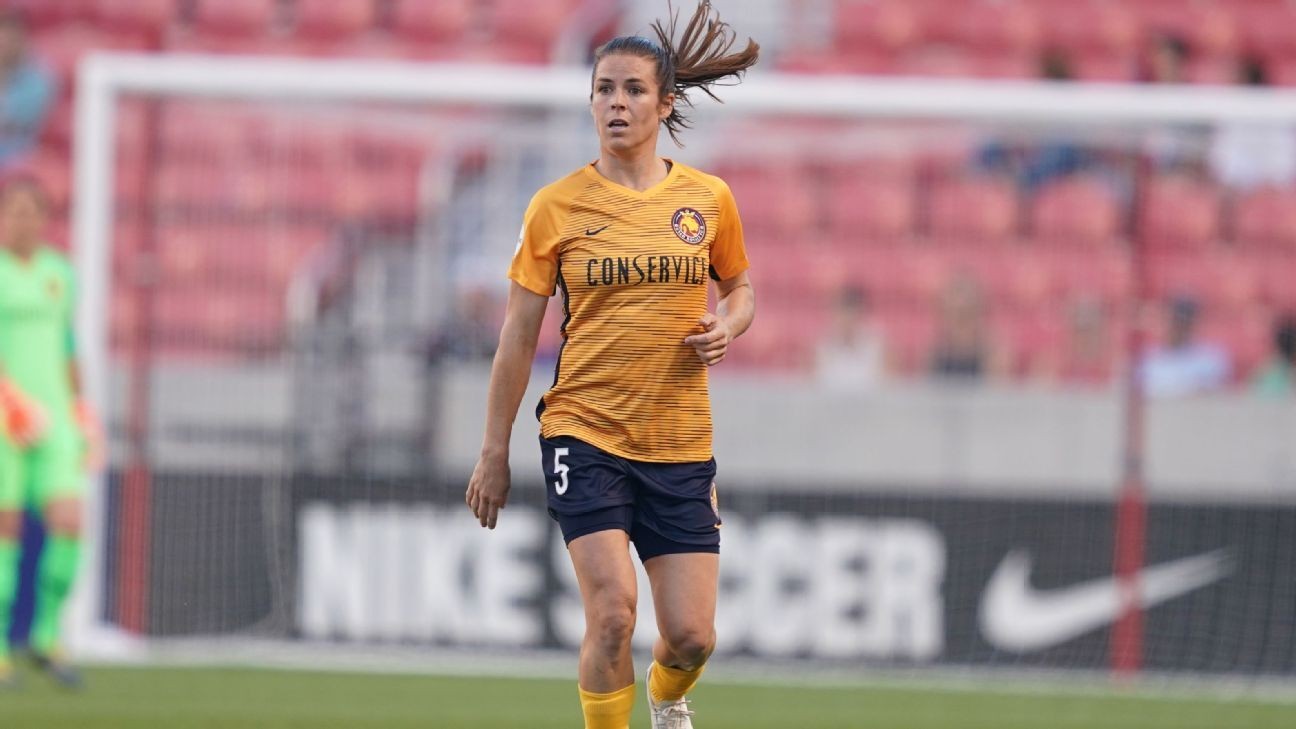 Kelley O'Hara is done answering questions. Well, no, not really. But one of the more thoughtful voices on the U.S. women's national team does have some questions she wants to ask.

An interview subject countless times over as a Hermann Trophy winner at Stanford and then a longtime member of the U.S. women's national team, including key roles in a pair of World Cup championships, O'Hara will be on the other side of the conversation as host of the "Just Women's Sports Podcast." The new podcast launches Tuesday, with O'Hara speaking with U.S. teammate Alex Morgan in the forward's first interview since giving birth to daughter Charlie. Future guests include Chloe Kim, Candace Parker and Breanna Stewart.

Currently playing with Utah Royals FC in the NWSL Challenge Cup, O'Hara recorded the initial episodes from inside the tournament bubble.

O'Hara and Just Women's Sports founder and podcast producer Haley Rosen, also a Stanford women's soccer alum and former professional player in the NWSL and Europe, spoke with ESPN about the new venture and trying to lift the media presence of women's sports.

Part of the pitch for the new podcast indicates you're hoping to dig into topics that often go overlooked, so what are some of those topics and in your mind why do they get overlooked?

Kelley O'Hara: What intrigued me and pulled me in to host this is I feel like a lot of times athletes are telling their stories through a journalist or a reporter and it's not so much through their words. And there is something very special and different and unique about sitting down athlete to athlete and having a conversation. I guess maybe not so much overlooked, but it's just a different perspective because as the interviewer, as the host, the one asking the questions, I have shared experiences. It might not be in the same sport, but as a female athlete, there's a lot of similarities -- and just an athlete in general. For me, that's what I found most intriguing. I love hearing peoples' stories, their journeys, how they became successful. Because I know in my own story and journey, it's very nuanced and complex and there's a lot of stuff people don't see. So kind of being able to open up a space where people can tell their stories.

Are you a pretty regular podcast listener?

O'Hara: I do listen to podcasts. My first foray into the podcast space was "Serial." I feel like I listen to them mostly when I'm traveling, on planes and stuff. But I do really enjoy them.

What's the sports/non-sports split in terms of what you listen to?

O'Hara: I don't know if I listen to that many sports podcasts, to be honest. I like listening to business, for instance "How I Built This." I love that because it's kind of the same vibe we're going for in terms of [how] it explains this journey of success. It gives you the insight into the wins but also the losses and the obstacles and the hard times, which I find so fascinating. I like hearing peoples' stories, and those are the podcasts I gravitate toward.

As host of the "Just Women's Sports Podcast," Kelley O'Hara wants to find the balance between advocacy and entertainment. Alex Goodlett/Getty Images

We often refer to the idea of players having a platform, and this podcast also seems like a manifestation of that. How do you make sense of what "a platform" means to you and what you want to do with it?

O'Hara: For me, it's interesting. When I first got in as a professional, people would be like, 'You inspire people, you do all these things.' And for me, I'm like, 'No, I'm just playing soccer, I'm just doing what I love.' But it becomes really that you do have an impact greater than yourself and you do have a responsibility to just make the world a better place. And for me, there's so many things that you could use your platform for, and I think you have to be able to find your bullseye, as someone once told me.

And with this, this is like a very specific thing that I feel very strongly about. I'm a female athlete, and I don't think that the coverage is as good as it should be. So I'm getting involved. I'm very much about, 'Don't just say it.' You should go out and do it. I think for a long time I expected other people to do what I wanted to see. And I realized throughout my career that if you want to see something happen, you have to make it happen.

So is there a balance you want to find in the podcast between advocacy and entertainment?

O'Hara: I think that it just comes hand in hand. That's one of the reasons that I wanted to do this is because it is a platform. It's the ability for me to bring on guests and fans and the world to hear their stories, their beliefs, their opinions through their own words. That kind of just goes hand in hand -- the things that are important to the guests that come on will come out through the conversations. And I think that's a great way to be able to give a platform to people that maybe wouldn't be able to speak on it as freely or as openly as they would want to.

Before the World Cup final last year, I remember being struck by how at ease you seemed during one of the last times players spoke to the media. Was there ever a time in your career when you worried about saying the wrong thing or guarding your opinions?

O'Hara: I think that I still do. I think everyone, when you talk to the media, is a little guarded. Because you know that, unless it's like a podcast, where it's your words and you're saying it, it's up for interpretation by the media. They can write it in the way that might fit their agenda. But at the same time, I feel like I've always just tried to be very true to who I am. I'm not trying to be anybody but myself. So I think that's allowed me to be as at ease as one probably can be when they're talking to the media. But that's not to say there aren't times where I'm like, 'Oh, this is uncomfortable.'

What made Kelley the person to fit your vision for this?

Haley Rosen: Kelley is an athlete that actually gets a ton of coverage, like I think the U.S. women's national team is mainstream now. I felt like that was really important, and we wanted someone that was willing to use their platform to really lend a voice to athletes or sports that maybe don't get as much coverage. I give Kelley all the credit in the world for that. ... Kelley is incredibly smart, she's inquisitive, she's thoughtful. She's never done this before, but she's a total natural. She's just really smart, so these interviews are interesting, but they're also fun and real. The last thing is, we needed someone who was willing to do it. It's interesting to hear Kelley answer the question about feeling comfortable or uncomfortable because I know during this process, I have pushed her out of her comfort zone. I just give her all the credit in the world because it's scary to put yourself out there.