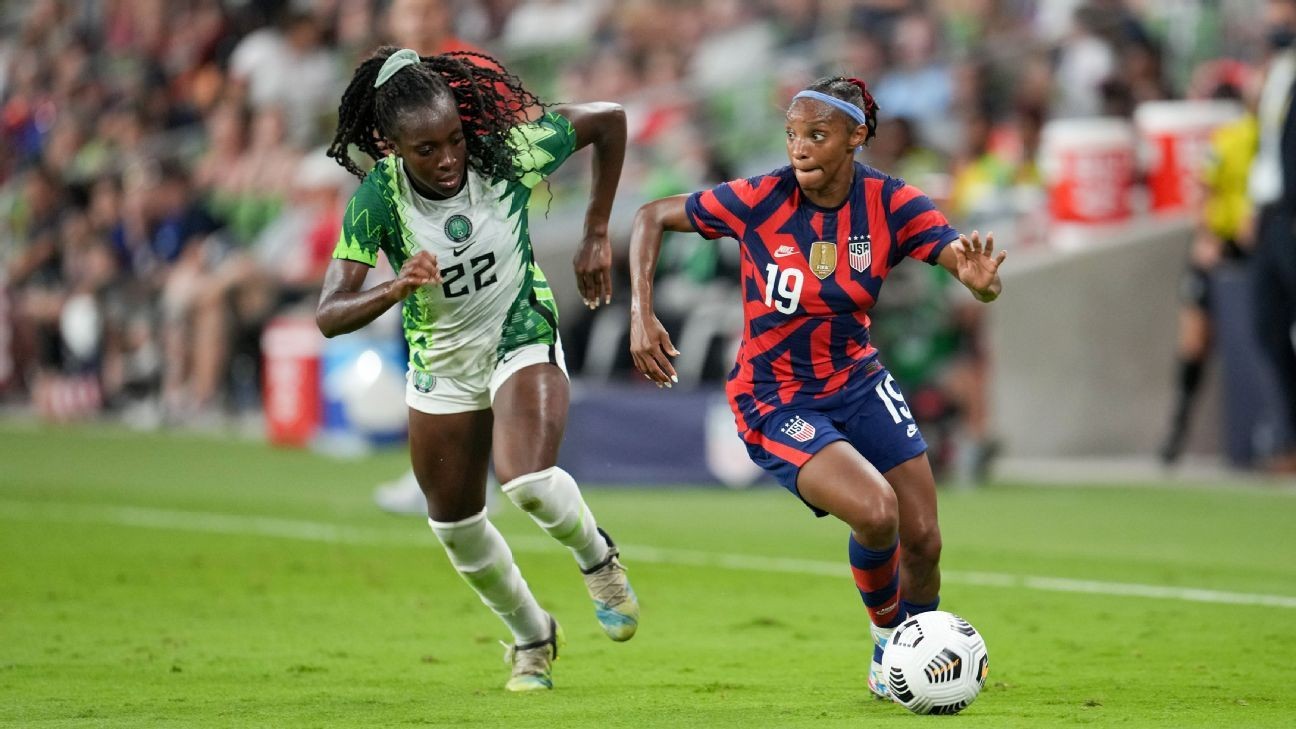 The United States women's national team will come up against 11-time African champions Nigeria in a two-match friendly series in September, it was announced on Wednesday.

The first game will be played on September 3 at Children's Mercy Park in Kansas City, and the second on September 6 at Audi Field in Washington, D.C.

It is the sixth time that the USWNT will be playing at the Children's Mercy Park but it is their first time at the Audi Field, though they have played 10 times previously in Washington -- all at the RFK Stadium.

"These will be the first domestic matches for the USWNT since qualifying for the 2023 FIFA Women's World Cup."

Nigeria are set to play in their Women's Africa Cup of Nations quarterfinal against rivals Cameroon on Thursday, with the winner claiming one of the four African tickets to the 2023 FIFA World Cup in New Zealand.

Crystal Dunn of the USWNT competes against Nigeria's Michelle Alozie during a friendly in Texas in 2021. Brad Smith/ISI Photos/Getty Images

USWNT coach Vlatko Andonovski says he's excited to send out his players against the Super Falcons: "First, I'm just excited to play two matches against Nigeria. They have some very talented players who will present a lot of different problems for us to solve on both sides of the ball.

"Secondly, of course we're looking forward to bringing the team back to one of the best soccer stadiums in the United States in Kansas City, as well as getting to play our first game at Audi Field, which I've visited several times for NWSL games and is also a fantastic venue for our team to play in front of our home fans."

The USWNT are the most successful team in the FIFA Women's World Cup, having won four of all eight editions competed for so far, starting from when they emerged champions of the very first edition in China in 1991.

They then won on home soil in 1999, in Canada in 2015, and in France three years ago. The team has also won four Olympic women's football gold medals and eight CONCACAF titles.

The Super Falcons have won the African championship 11 times, played in every edition of the FIFA Women's World Cup, and also played at the 2000, 2004 and 2008 Olympic women's football tournament. They remain the most successful women's team on the African continent. The USWNT have already qualified for the 2023 FIFA Women's World Cup, becoming the 12th team to reach the finals and the first team from the CONCACAF region.

Nigeria's Falcons are also coached by an American, long-time college and NWSL coach Randy Waldrum -- who is aiming for a World Cup ticket and first African title with Nigeria in Morocco.

The teams first met at the 1999 World Cup, when the USWNT stormed back from going behind to an early Nkiru Okosieme goal, to claim an emphatic 7-1 win.