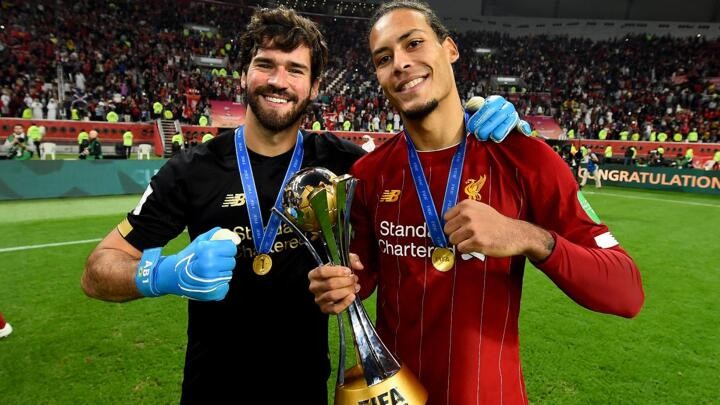 Liverpool's Virgil van Dijk is facing a lengthy spell on the sidelines after the Reds confirmed that the Netherlands international requires surgery on a knee injury.

Liverpool defender Virgil van Dijk is likely to miss most of the rest of the season after the Premier League champions confirmed that he has damaged ligaments in his knee, meaning he.

The Netherlands international was forced off early in the Merseyside derby after a challenge by Everton goalkeeper Jordan Pickford, who was fortunate that an earlier offside flag meant his lunge went unpunished.

Van Dijk is set to undergo surgery and the Reds have not put a timescale on his return to action.

Jürgen Klopp was already dealing with a major injury issue, goalkeeper Alisson missing Saturday's 2-2 draw at Goodison Park due to a shoulder injury sustained prior to the international break.

So how have Liverpool coped with and without the star defensive duo previously? Time to take a look, with help from Opta:PILLARS OF STRENGTH

Van Dijk, of course, has only missed one league match since making his Liverpool debut following a £75 million move from Southampton in January 2018. That was a 3-0 win at Huddersfield Town in the very month he arrived.

Similarly, Klopp's men have only failed to win twice in the 11 games Alisson has missed in the top flight, and one of those was Saturday's draw at Everton.

Of course, you would not expect either player to sit out matches lightly. They cost a combined fee of close to £150m and their arrivals helped to transform a previously suspect defence.

It's also undeniable that Liverpool were a far stronger side across the board by the time Van Dijk and Alisson arrived two years ago, with Klopp having had two to three years to implement his ideas and strengthen the collective unit, so any consideration of their form before those signings must be tempered. But that's not to say there are not some worrying signs.

Under Klopp, Liverpool have played 70 league games with Alisson and Van Dijk in the starting line-up. They have won 56, drawn 10 and lost four, giving them a win rate of 80% – a truly remarkable figure.

As mentioned, the Liverpool of October 2015 to January 2018 and the Liverpool since are two different animals, so we should explore things more deeply.

It's no surprise that, without Alisson and Van Dijk, Liverpool have conceded 110 goals – 1.2 per game – compared to just 51, or 0.7 per game, when they have played. But there is negligible difference in terms of their average shots faced per game: it's 8.3 with them and 8.8 without. That tells you the importance of a shot-stopper of Alisson's quality.

ENGINE OF THE RED MACHINE

Not only do Alisson and Van Dijk control the back line, they dictate the way Liverpool operate.

The Reds average 62.9% possession in league games with those two playing compared with 60.2% without. Their passing accuracy in the opposition half also climbs by nearly three per cent to 79, despite the fact their number of passes into the final third on average drops from 75 to 68 when Alisson and Van Dijk play.

Those numbers indicate that not only do they bring an extra dimension to the attack with a proclivity for line-splitting passes, but they also help Liverpool assume control of games to an extent that their number of attempted forward passes diminishes.

Add to that the fact they win fewer fouls per game (8.2 compared with 9.4) and concede fewer per game (8.4 compared with 10.3) and the measure of authority they bring to these matches becomes clearer. Their absences, for however long, will be keenly felt.