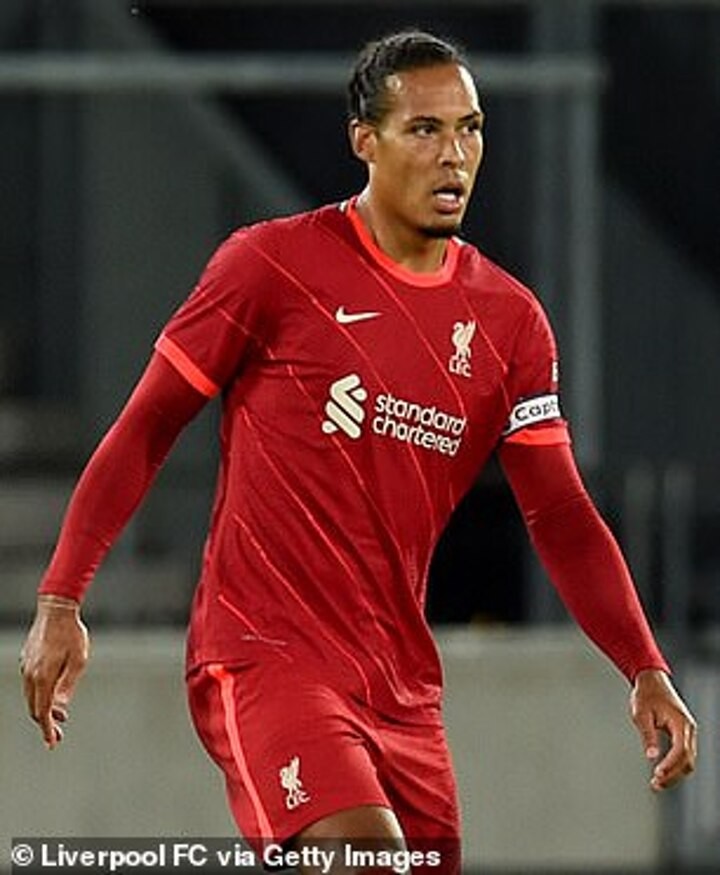 Nine months, nine months too long. For the first time since Jordan Pickford's erratic lunge in the Merseyside Derby last October, Virgil van Dijk strutted out in a Liverpool shirt once again on Thursday evening.

This had been a long time coming. The absence of the Dutch talisman, so often the linchpin in the Reds' Champions League and Premier League triumphs, was sorely felt last season amid a turbulent and chaotic campaign for Jurgen Klopp's side

But, ahead of their Premier League opener against Norwich on August 14, this was a welcome return to on-field action for Van Dijk - and for centre back partner Joe Gomez who entered the pitch with him too.

A day full of hope and optimism for Liverpool fans everywhere, despite the 4-3 loss to Hertha Berlin.

Every Van Dijk touch was cheered by the crowd at the Tivoli Stadion and if you listened closely, a faint chant of the Dutchman's iconic 'Calm as you like...' chant was sung by a few hardcores.

Mind you, it was far from plain-sailing in the 23 minutes of Van Dijk and Gomez back together.

Van Dijk was partially culpable for Hertha's fourth goal as he came out second-best in a one-on-one tussle against ex-Manchester City forward Stevan Jovetic, while Gomez was booked - some feat in a pre-season friendly - for a cynical foul on winger Dennis Jastrzembski.

Yet Van Dijk's header across goal led to Alex Oxlade-Chamberlain scoring Liverpool's third late on and his constant communication was obvious from when he entered the field of play.

Arguably, it was that leadership which Liverpool missed most last season, as well as Van Dijk's dominance. And though there was no doubt rustiness - as shown in the Jovetic battle - it was encouraging to see the Dutchman come through unscathed. Gomez, aside from his booking, looked assured and composed at the back too.

In fact it was more than encouraging. For Liverpool fans, it was a huge relief.

Because if we rewind to the start of the largely spectator-less 2020-21 season, there's no doubting that the impact the injuries of Van Dijk and Gomez had on the Reds was profound.

It was a matter of minutes into the derby at Everton when Van Dijk, attempting to reach a cross at the back post, was aggressively clattered into by Pickford.

Klopp did not mince his words afterwards, knowing the severity of the challenge: 'I don't want to say Jordan Pickford wanted to do it but it is not a challenge a goalie can do in the box.

'Virgil played I don't know how many games in a row, he plays with pain, but he couldn't play on.

Van Dijk had surgery - but it was somewhat manageable for Klopp, with other defenders available to him.

But when Gomez picked up a knee injury himself - rather irritatingly in training while on England duty in November - it was nothing short of a defensive nightmare for Klopp.

Makeshift centre backs did their best, predominantly Fabinho and occasionally Jordan Henderson stepping in. And in January, when Joel Matip picked up a season-ending blow too, the cavalry was called in with Ozan Kabak and Ben Davies joining the club in the latter days of the transfer window.

But it was in this period where Liverpool missed Van Dijk - a runner-up in the 2019 Ballon d'Or, and Gomez most, particularly amid a disastrous run of form at home.

And though Nat Phillips and Rhys Williams filled in admirably, particularly as the Reds snuck into the Champions League places, the gaping hole left by Van Dijk and Gomez was undeniable.

Still, onwards and upwards. Holland captain Van Dijk, sensibly, opted not to rush back for Euro 2020 and focused instead on the Reds' pre-season training camp in Austria.

And so here we are, 15 days away from the new Premier League season.

Liverpool want that title back and that journey starts away at Norwich on August 14. The big question now is: will Van Dijk and Gomez be fit to feature from the start, in less than two weeks time?

It is, perhaps, optimistic. But now Van Dijk is back. Gomez is back. And that will be music to the ears of every Liverpool fan.

Klopp's too, who said afterwards: 'It was a nice feeling, eh? Usually we all know the fourth goal, we defend that situation well.

'But it's nice to have them back. First step, really important.'

'It was nice to see. I am not sure 260-something days [out] for Virg, Joe not too many less. Great to have them back.'

The rehabilitation is far from complete, as Klopp noted with the fourth goal. But the pair have now made a significant step - and the end goal of full fitness could not come soon enough for this Liverpool squad.