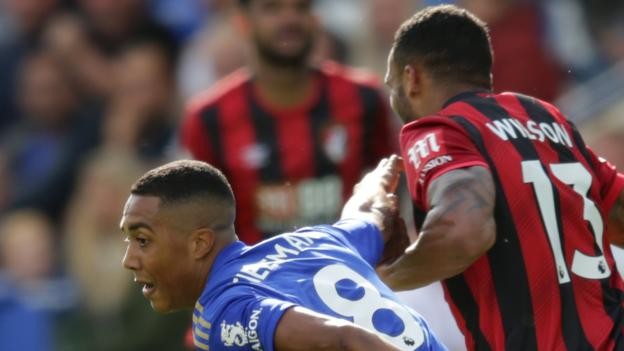 The video assistant referee failed to overturn four decisions it should have done during the first four rounds of Premier League matches this season.

During those rounds there were 227 incidents involving goals, red card offences as well as potential and actual penalty decisions.

Of those incidents, six decisions were changed by VAR.

The four incidents in question are:

Claims for a penalty from Manchester City for a foul on midfielder David Silva in their 3-1 win at Bournemouth on 25 August A foul on West Ham striker Sebastian Halle in their win against Norwich City on 31 August Leicester City's Youri Tielemens should have been sent off for his foul on Bournemouth's Callum Wilson on the same day Also on 31 August, a handball by Newcastle United's Isaac Hayden was missed in the build-up to Fabian Scharr's equaliser against Watford

Both the Manchester City and West Ham incidents were immediately dismissed by the referee.

Overall, the Premier League are reasonably satisfied at how the new technology is being used and feel they have got six decisions right, when 12 months ago they would have been incorrect.

In addition, a meeting of all 20 clubs in London earlier had a discussion about the merits of moving the transfer window back towards the end of August, in line with most other European countries, but decided more talks were required at their next gathering in November.

Find out how to get into football with our special guide.