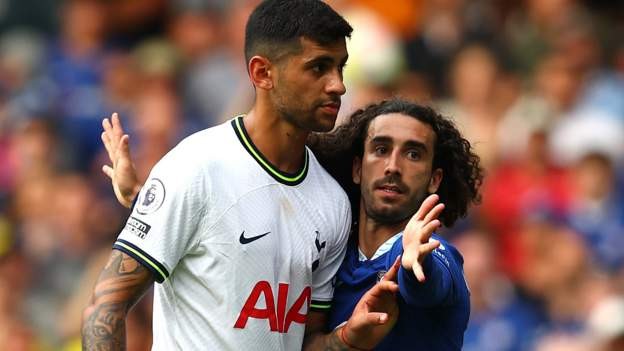 Mike Dean has admitted an error in not asking referee Anthony Taylor to check his pitchside monitor after Cristian Romero's hair-pull on Marc Cucurella.

"In the few seconds I had to study Romero pulling Cucurella's hair, I didn't deem it a violent act," he said.

Speaking to MailPlus, Dean added:external-link "I've since studied the footage, spoken to other referees and, upon reflection, I should have asked Taylor to visit his pitchside monitor to take a look for himself.

"The referee on field always has the final say."

It follows an investigation launched by the Football Association into Chelsea boss Thomas Tuchel's post-match comments about Taylor.

The German suggested Taylor should not referee Chelsea matches in future.

Tuchel and Spurs counterpart Antonio Conte have both been charged by the FA after an angry confrontation following the full-time whistle.

It is alleged that the behaviour of both managers was improper.