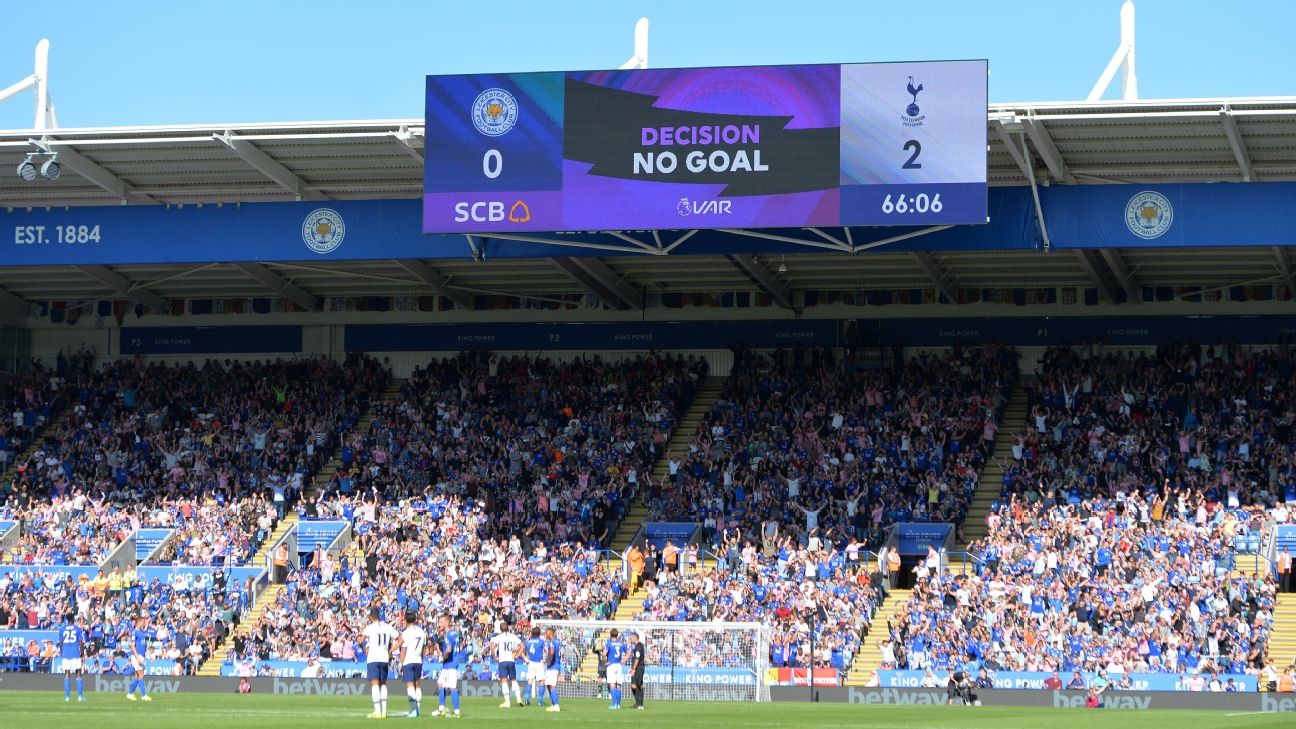 So, how are people feeling about VAR? Also, Liverpool keep winning, Tottenham look exhausted and Man City showed less than zero mercy in their first league game since defeat at Norwich. Buckle up: it's Nick Miller's Weekend Review.

This weekend's argument against VAR is...

We've reached the point already in the 2019-20 season whereby VAR is not enforcing the rules but effectively changing them, or at least distorting their intent. The purpose of offside, for example, is to ensure the attacker does not gain a disproportionate advantage, but what advantage did Son Heung-min gain by his armpit being an inch beyond the last defender for Tottenham's disallowed goal in Saturday's defeat at Leicester?

That's a slightly broader philosophical point, perhaps: you could argue that offside is binary and you're either offside or not, whether it's by 10 yards or one inch. But you then have to be pretty certain that you can judge that inch accurately, and the reality is you can't: without wishing to get bogged down in the minutiae, the frame rates of the cameras mean you can't absolutely determine where the key points of the incident -- when the pass is struck, precisely where the "offside" player is -- occur, so these marginal decisions can't be judged accurately.

In effect, it means the absolutes don't exist.

Leicester got lucky with a really marginal VAR call that could have helped Tottenham back into the game. Is the technology going too far?

VAR can and does work well, for the most part: in the same game, Ayoze Perez was clearly offside for a disallowed Leicester goal and it was efficiently ruled out. But games are being decided on the barest of margins when the technology isn't reliable enough to definitively judge how bare those margins are.

And that's just this week's argument against VAR and its implementation. Next week, there will be another and another after that. VAR was brought in to reduce the uncertainty in officiating but as things stand, it's just increasing it.

Are Tottenham drifting out of relevance?

Mauricio Pochettino didn't blame VAR for Tottenham's defeat against Leicester. It's partly because he knows that managers have been calling for it to be introduced for years, which means they'd look pretty silly complaining now it's here, but it may also have been because he knows it would just look like a distraction from his team's problems.

This was the third time in their last four games that Spurs have surrendered a lead and it was another away game without a victory: they haven't won a Premier League match on the road since beating Fulham in January.

This feels like a Spurs team drifting. There was a hint of further discontent on Friday with the manager's curious declaration that he wasn't sure whether their squad was better this season than last despite their new additions. There's a concerning softness to them, and it's only the problems faced by the other top four contenders that might prevent you from writing them off as potential Champions League candidates this season.

Is this another wasted year for Manchester United?

Marcus Rashford's penalty against Paris Saint-Germain in March might turn out to be the most glorious moment that United fans wish never happened. Ole Gunnar Solskjaer's permanent appointment was confirmed a few weeks later, with league results already on the turn, but would the United hierarchy have been so quick to give him the job had they been out of Europe? They should have waited until the summer to make the decision anyway, but without the Champions League and the afterglow of that night in Paris, would they have been more likely to hold fire?

You felt sorry for Solskjaer watching his post-match media appearances on Sunday, trying to explain the the 2-0 loss at West Ham. He looks like a beaten man, scrambling to find answers to questions that he knows he can't and struggling to maintain his usually relentless positivity.

Ultimately the West Ham defeat was down to the deficiencies in their squad, but at least if there was someone with more managerial nous than Solskjaer, someone you could be confident will still be there in two years, you might think this was the dark before the dawn. Instead, this feels like yet more wasted time for a club that have been drifting for six years.

They won, but are Arsenal progressing under Emery?

Sunday saw a victory for Arsenal, but one that potentially raises more questions. Such as how they can have so little control of a game against a newly-promoted team, or how they can defend so abysmally as to concede the two goals they did against Aston Villa.

These are still early days in the season and they will be delighted if they will still be fourth in May, but there's still the nagging sense that this team just aren't progressing under Unai Emery.

Success at both ends for Leicester

James Maddison got the headlines for Leicester's win over Spurs, and rightly so, but a word for a couple of other players, old and new(ish). Jamie Vardy is 33 in January but still plays like a 23-year-old, and Brendan Rodgers wasn't being entirely disingenuous when he said he wouldn't swap his striker for Harry Kane.

At the back, Caglar Soyuncu was terrific again, showing that Leicester really aren't missing Harry Maguire that much. It's a victory for planning ahead in transfer strategies after they bought him last summer in anticipation that they would need a replacement centre-back at some stage, a move that is now bearing fruit.

Liverpool find another way to win

The idea that a team winning while playing badly are "champion material" is a hoary old cliche, which in any case might be harsh to apply to Liverpool after this weekend. But what could be encouraging is them winning games in various different ways: the success at Chelsea was not one of great style but one they achieved through substance, grinding out a 2-1 victory to stay five points clear at the top of the table.

They've now won 15 league games in a row stretching back to March and it's just as well, really: despite City's recent slips, Liverpool know they'll have to be more or less perfect to topple their rivals this season.

Signs of progress in defeat for Chelsea

Chelsea may have lost to Liverpool but they aren't the first and won't be the last. In any case, there are plenty of positives Frank Lampard can take for his youthful, patchwork side. One was the performance of Fikayo Tomori, who was terrific in defence and showed that, like Mason Mount and Tammy Abraham have already, he's another Chelsea youth product that belongs in the first team.

They still haven't won at home this season and conceding another two goals is clearly a concern, but their second-half performance in particular, in which they pinned Liverpool back for long spells, indicated there is hope ahead.

Luckiest moment of the weekend

There were a few concerning moments for Liverpool's defence but the starkest was in the closing stages when substitute Michy Batshuayi was allowed as much space as he wanted to head in an equaliser for Chelsea... only he didn't and Liverpool got away with it. They might not be so lucky another weekend.

Player of the weekend

The current record-holder for assists in a Premier League season is Thierry Henry, who got 20 in 2002-03. Kevin de Bruyne is currently on seven in six games and his first against Watford on Saturday was so good it should probably have been worth two or three.

It's still September, but we're almost certainly witnessing one of the greatest individual seasons of all time from the Belgian.

It's better to be proactive than passive against City

Manchester City are so good that Watford could easily write that defeat off before the match, but they were pathetic at the Etihad and it started from the moment the teams were named.

Managers might think that trying to attack City is suicide, but there is a middle ground: Quique Sanchez Flores named a side without a striker and Tom Cleverley was their second-most attacking player. Their entire approach to the game was embarrassingly passive and when you concede after 52 seconds to a team that good, it's impossible to alter that mindset.

Hopefully the contrast in approach by City's last two opponents -- Norwich's proactive win and Watford's humiliation -- will persuade opposition managers not to start games against them in such spineless fashion. Because if you set out to contain and get battered 8-0 anyway, you might as well play the game like there are two teams out there, rather than one and a set of training cones.

One in the eye for statistics

Sheffield United's 2-0 win over Everton at the weekend was further evidence that statistics should be used very carefully indeed. Chris Wilder called it their worst performance of the season but they won 2-0 despite having 30 percent of possession and two shots, of which only one was on target. Weird old game, sometimes.