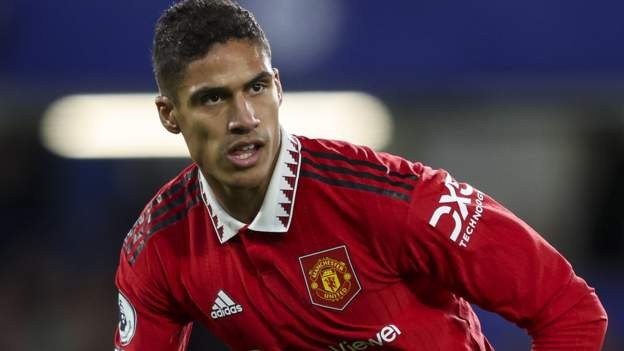 France defender Raphael Varane says the situation around his club Manchester United and teammate Cristiano Ronaldo "affects" all of the players.

In excerpts of a television interview, Ronaldo said he feels "betrayed" by the club, does not respect manager Erik ten Hag and is being forced out.

United said they would consider a response "after the full facts have been established".

"We follow what is happening and what is being said.

"We try to calm the situation in our own way, we try not to get too involved in it. What is happening in the media in the big clubs is gaining momentum.

"When it's a star like Ronaldo, even more, so we try to take it with distance, that is to say that we do not try to change the situation alone, we are part of a collective."

Cristiano Ronaldo & Man Utd - what comes next for the Portugal forward?

Ronaldo refused to be a late substitute during the victory over Tottenham Hotspur on 19 October, and United made it absolutely clear behind the scenes that they backed Ten Hag to deal with the situation.

The 37-year-old Portugal international was then not involved in the matchday squad for the following game at Chelsea.

"What I want is the best for my team, so whatever the decision, as players, we'll accept it and give the best of ourselves," added Varane, who also played alongside Ronaldo at Real Madrid.