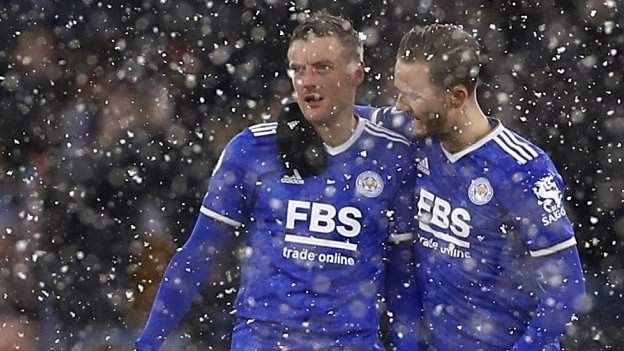 Ranieri was in the opponents' dugout for the first time since guiding the Foxes to the 2015-16 Premier League title and received a great reception from the home fans.

But in a chaotic and thrilling game played in blizzard conditions, his current side played a big part in their own downfall.

There looked to be no danger when Jonny Evans launched a free-kick forward, but William Ekong ducked under the ball and that allowed James Maddison to fire the 16th-minute opener past Daniel Bachmann.

Watford were gifted a chance to equalise in the 30th minute when Wilfred Ndidi clumsily chopped down Emmanuel Dennis and Joshua King fired his penalty into the top corner.

But the hosts retook the lead four minutes later with an unmarked Vardy glancing a header in from Maddison's corner. The pair combined again just before half-time with Vardy lifting a fine finish for his second and Leicester's third goal.

Dennis then dispossessed Timothy Castagne and calmly finished to make it 3-2 in the 61st minute, but the hosts quickly restored their two-goal advantage when Harvey Barnes set up Ademola Lookman for a close-range tap-in.

The victory takes Leicester up from 13th into ninth, while Watford remain 16th, four points above the relegation zone.

Leicester v Watford as it happened, plus reaction and analysisGo to the Leicester pageGo to the Watford page

Leicester's win was only their fifth of the season from 13 Premier League matches. Manager Brendan Rodgers will have been delighted with his side's effort in tough, sometimes farcical conditions, in their second game in four days after a 3-1 win over Legia Warsaw on Thursday.

Watford had beaten Manchester United 4-1 last time out - a result that cost United boss Ole Gunnar Solskjaer his job. But they looked fragile in defence throughout against the Foxes. Vardy nearly had a first-half hat-trick, but was denied by the legs of Bachmann.

It will have been an afternoon of mixed emotions for Ranieri as Leicester fans sang songs praising him throughout the match - a tribute to the club's achievements five years ago when they won the league after being written off as 5,000-1 no-hopers at the start of the campaign.

Ranieri has now had six games in charge of Watford and lost four of them. His side have not had a clean sheet all season and need to dramatically improve at the back and do so quickly.

If Watford defend like they did at the King Power Stadium, they could well be on the end of two thrashings.

Attempt saved. Jamie Vardy (Leicester City) right footed shot from the left side of the box is saved in the bottom right corner. Assisted by Çaglar Söyüncü.

Attempt missed. Ozan Tufan (Watford) right footed shot from the centre of the box is close, but misses to the left. Assisted by Kiko Femenía with a cross.

Boubakary Soumaré (Leicester City) wins a free kick in the defensive half.

Boubakary Soumaré (Leicester City) wins a free kick in the defensive half.