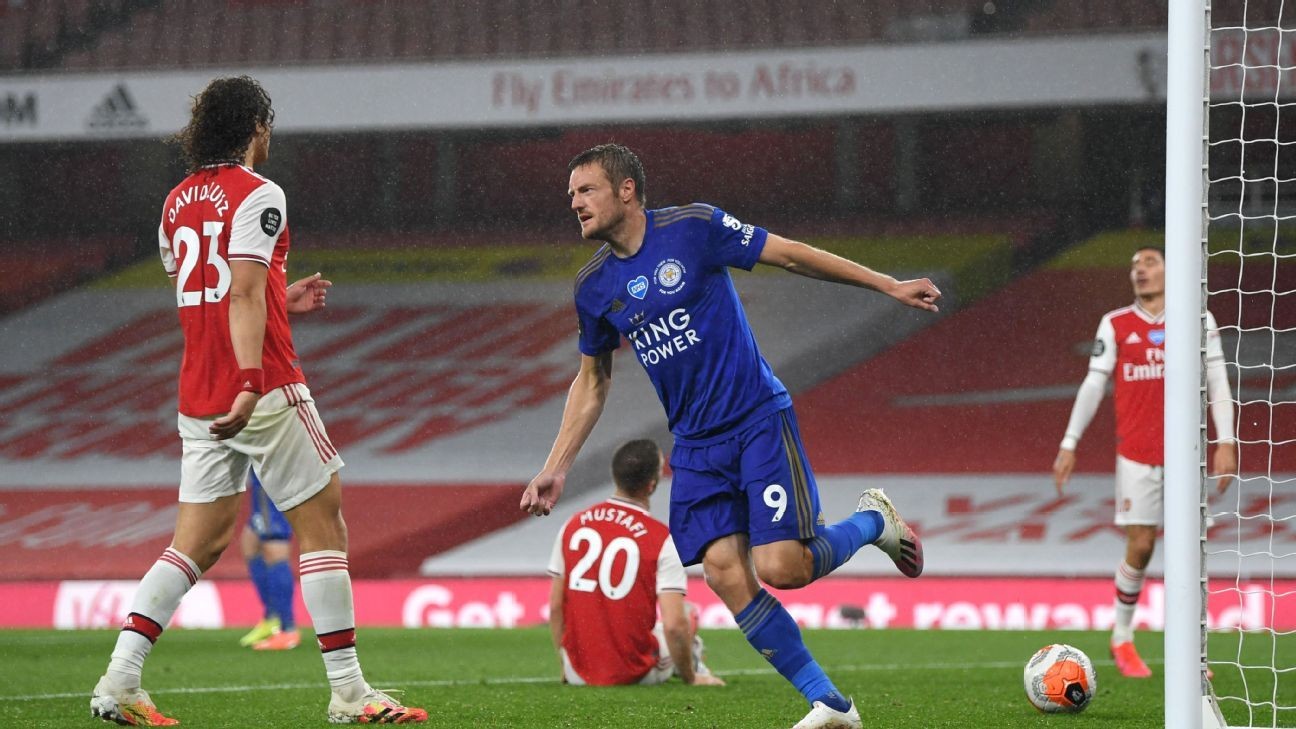 Jamie Vardy opted not to join Arsenal in 2016 because he believed Leicester City offered the better chance of Champions League football. It has taken longer than anyone at either club would have liked but after Tuesday's 1-1 draw at the Emirates, he may just be proved right.

Neither the Foxes nor the Gunners have played in Europe's elite competition since the subsequent 2016-17 campaign but the 33-year-old striker struck a telling blow here which leaves Leicester nine points clear of Arsenal and best-placed to return next season. His 84th-minute equaliser earned Brendan Rodgers' side a precious point which keeps them in the Premier League's top four while also checking the momentum Mikel Arteta has engendered at the Emirates since the restart.

It was, in the end, a familiar story for Arsenal after a largely unfamiliar performance. They were purposeful, committed and well organised, overwhelming the visitors in a dominant first-half display which should have yielded more than Pierre-Emerick Aubameyang's 21st-minute opener. And although this was billed as a battle between the Premier League's top goalscorers, it was 21-year-old striker Eddie Nketiah who made the decisive intervention here, receiving a red card four minutes after coming on as a 71st-minute substitute.

In his eagerness to press the ball as Arteta demands, Nketiah went to close down James Justin with his leg dangling in the air. Referee Chris Kavanagh initially deemed the contact a yellow card but after being asked to check the decision by VAR official Stuart Attwell, upgraded the punishment to a red card. Nketiah meant no harm but he was not in control and missed the ball, grating down on Justin's leg.

Nketiah sent off, Saka 8/10 as Arsenal squander major opportunity vs. LeicesterAubameyang vital for Saka and Arsenal's other youngstersMourinho hits back at Arsenal social media post

Arteta said: "He is disappointed, he has said sorry. He didn't mean to do that. I know when he goes for every single ball, he is so willing to win every challenge, he is on the front foot in every action. He didn't see the player coming out. He doesn't want to hurt anybody. It is part of the process. They are really young, they need to learn from these situations and hopefully it won't happen again."

It would be remiss to suggest that panic ensued but following the red card an equaliser felt inevitable. It came in the 84th minute, as Vardy timed his run to survive the tightest of VAR reviews to meet Demarai Gray's cross and convert first-time past Arsenal goalkeeper Emiliano Martinez.

The Gunners did not capitulate -- there certainly wasn't the fragility witnessed in November's reverse fixture which hastened the end of Unai Emery's reign -- but losing a lead in circumstances of their own making is a longstanding habit Arteta will need time to eradicate.

Jamie Vardy now has 10 goals in 10 against Arsenal, adding salt in the wound for the club who nearly signed him in 2016. Shaun Botterill/Getty Images

Vardy now has 10 goals in as many games against the Gunners, a record which marks both his remarkable consistency and the biannual 90-minute regret senior figures at the club must feel in not signing the former England international at the peak of his powers. Back in 2016, a £20 million deal was virtually completed only for Vardy to change his mind at the very last minute. The emotional pull of continuing a remarkable journey with newly-crowned Premier League champions Leicester was irresistible but only because doubts persisted whether the Gunners were really about to reverse their decline in the latter days of Arsene Wenger's reign.

As it turns out, Vardy's decision led Arsenal to buy Lucas Perez from Deportivo La Coruna, an expensive £17m flop which underlined the extent to which Wenger had lost his touch in the market. Arsenal's travails eventually cost Wenger and his successor, Emery, their jobs, with Arteta now charged with casting the club in a new light.

There are signs he is on the right track. Once the disappointment subsided over conceding late on, Arteta reflected on the quality and character the Gunners showed prior to Nketiah's introduction. Profligacy cost them dear but Arsenal were structured in an encouraging fashion. Real Madrid loanee Dani Ceballos helped dictate terms in midfield, producing a superb ball for Bukayo Saka to assist Aubameyang's opener.

And imagine how good Saka, who has four goals and 11 assists over all competitions this season, will be when Arsenal work out his best position. The 18-year-old timed his run behind Caglar Soyuncu to perfection before shimmying past Jonny Evans brilliantly and delivering a perfectly-weighted cross for Aubameyang, who couldn't miss. The entire execution belied his tender years, even more impressive when coming off the right flank where he looks less of a natural than on the left. Arteta has even tried him as a No.10 in training, having already deputised him at left-back earlier in the season when injuries abounded elsewhere. Kieran Tierney now looks primed to make that position his own, a development which should only help Saka push on further forward.

Arteta couldn't allow Vardy to escape his thoughts, however, creating a tenuous link between Nketiah's dismissal and an incident just before half-time when the Leicester striker caught Skhodran Mustafi as they both fell to the ground.

"What I am saying is that if you review incidents of that type, you should review them all," he said "It has to be something equal for everybody. If Eddie's is a red card, for sure the other one is a red card."

The result leaves Arsenal needing a miracle in the race for Champions League football with just four games to play and Vardy able to reflect on an impressive tally of 37 goals in 64 games against the top six.

Chelsea may have edged past Leicester on the night but getting a chance to improve his Champions League record is a step closer.