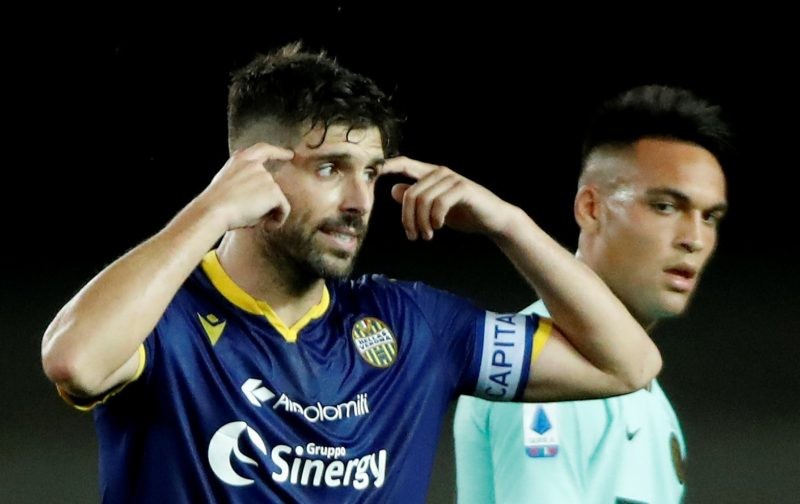 A late strike from Miguel Veloso handed Verona a 2-2 draw against Inter at the Stadio Bentegodi on Thursday evening to further compound a miserable week for the Nerazzurri.

Darko Lazovic gave Verona an early lead, but two goals in six minutes put Inter in control with Antonio Candreva scoring Inter’s first, then having hand in the second as Federico Dimarco defected into his own net.

But after a lacklustre second half, Verona snatched an unlikely point through Veloso, and their first Serie A home draw game in 2020.

The result means Inter have dropped seven points since the restart and stay in fourth spot, one point behind Atalanta, while Verona remain in ninth place six away from Europa League qualification. Inter were stunned in the opening two minutes when Lazovic breezed past Milan Skriniar, got himself into the box, and from an acute angle blasted the ball past Samir Handanovic.

The evening didn’t get much better for Inter as Miguel Veloso smashed the upright with a shot from the edge of the area, then Federico Dimarco’s curling volley whistled just wide of the post.

An effort from Roberto Gagliardini was saved by Marco Silvesrti, while Alexis Sanchez had a freekick tipped over the bar, as Inter found clear cut opportunities hard to come by. Then just before the break, Veloso swung in a dangerous ball from the left and Davide Faraoni was unable to poke the ball into an empty net.

Almost immediately after the break Inter got themselves level thanks to a lovely flowing move which ended with Lukaku hitting the post, then Candreva tapping in the rebound.

The game was turned on its head when Gagliardini passed to the Candreva on the right and his cross took a wicked deflection off Dimarco before flying into Silvestri’s near post. Substitute Lautaro Martinez could have wrapped the match up as he rushed in on goal, but Silvestri made a good save to deny the Argentine.

Then with four minutes left to play, Amir Rrahmani ventured into the opposition box and rolled the ball to Veloso who side-footed past Handanovic.