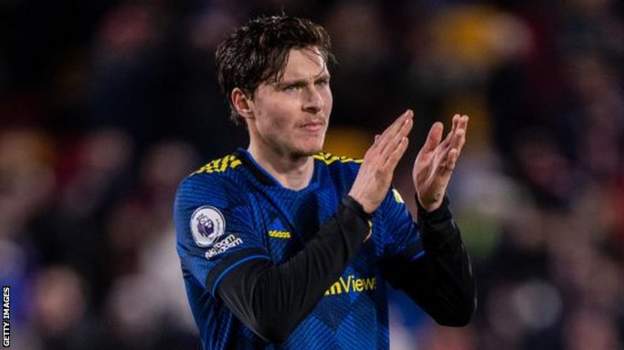 The wife of Manchester United's Victor Lindelof said her family were the subject of a "traumatic and scary" break-in while the defender played against Brentford on Wednesday.

Maja Lindelof posted news of the attack on Instagram, saying she locked herself in a room with the couple's children.

She has now returned to Sweden.

"We are OK under the circumstances but it was obviously a very traumatic and scary moment for both me and my little kids," Maja Linelof posted.

"I was at home with both the kids but we managed to hide and lock ourselves in a room before they entered our house.

"We are now in Sweden and are spending some time with our families."

United have confirmed the break-in happened and in a statement said: "We can confirm that a break-in occurred at Victor Lindelof's house during the away game against Brentford.

"His family, who were at home at the time, were unhurt but clearly shaken. This was a distressing experience for them, and for Victor when he learned of it after the game, and the club is providing them with our full support.

Manchester City defender Joao Cancelo was injured when he tried to fight off a gang of intruders during a break-in over the Christmas period.