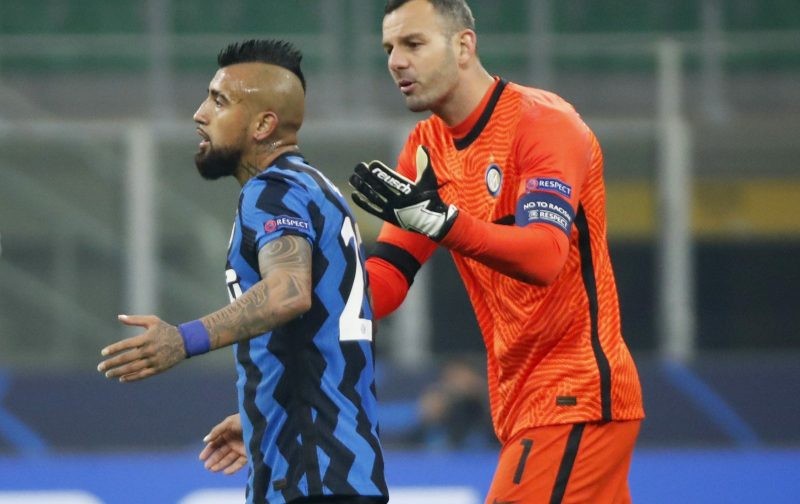 Without a win after four matches, Inter are facing elimination from the Champions League following a 2-0 defeat to Real Madrid on Wednesday.

The Nerazzurri were resoundingly beaten at the Stadio Giuseppe Meazza courtesy of an Eden Hazard penalty and Rodrygo’s second half strike, but their cause was hampered when Arturo Vidal was sent off for dissent with only 30 minutes played.

Having lost to Real Madrid in the corresponding fixture earlier this month, coupled with costly draws against Borussia Moenchengladbach and Shakhtar Donetsk, Inter sit bottom of Group B and the likelihood of elimination at the Group Stage. Catalogue of errors at root of elimination

Despite being handed a more than manageable group, Inter find themselves rooted to the foot of it and it has mostly been of their own doing. From a complacent and lethargic performance against Shakhtar to Achraf Hakimi’s dreadful backpass to set up Karim Benzema against Real Madrid, the Nerazzurri’s Champions League campaign has been riddled with errors and sloppiness.

It all came to ahead on Wednesday when Vidal’s frustration at not being awarded a penalty got the better of him and his fit of anger earned him a red card. Leaving his teammates chasing a must-win game with a man down for over an hour, the Chilean’s irresponsibility gave Inter no chance.

After the best part of a decade out of the competition, Inter cannot afford to be so careless in Champions League matches and look set to pay the price with a second Group Stage exit in as many years.

Inter are too reactive

Defeat at the San Siro means Inter have fallen behind and chased a match in four of their past five outings in all competitions. Whilst they got away with it in 4-2 victory over Torino on Sunday, lightning didn’t strike twice against Real Madrid and the Biscione were made to pay for an early penalty concession.

Antonio Conte’s side simply cannot continue to allow opponents to establish a foothold in the game before they spark into life and their reactiveness has led to points dropped at home and in Europe.

With the attacking flair and lethal finishing of Romelu Lukaku, Inter ought to be taking the game to their opponents, but instead have been lethargic and unconvincing for weeks. Elimination from the Champions League could be the wake up call needed for a strong Serie A campaign. Yet it could also be the spark that derails their season further.